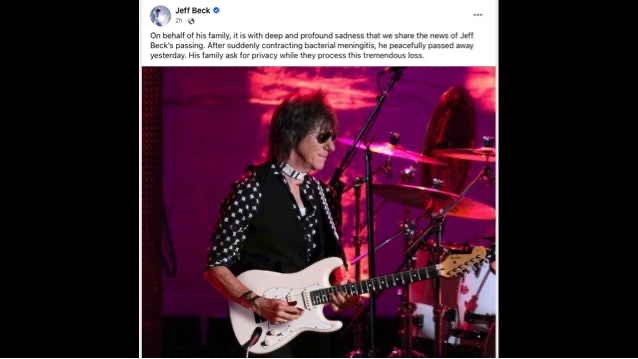 (hennemusic) Legendary guitarist Jeff Beck died on January 10th at the age of 78 from bacterial meningitis, his family and team revealed via social media.

"On behalf of his family, it is with deep and profound sadness that we share the news of Jeff Beck's passing," shared his social media team on Wednesday. "After suddenly contracting bacterial meningitis, he peacefully passed away yesterday. His family ask for privacy while they process this tremendous loss."

Born in Wallington, UK in 1944, Beck discovered his love of guitar as a youngster and went on to play in a number of bands while in art school in the early 1960s. Beck rose to prominence in 1965 when he joined The Yardbirds as a replacement for Eric Clapton, and briefly performed alongside Jimmy Page in the lineup before being fired during a US tour.

Beck released his solo debut, "Truth", in 1968, mixing blues and hard rock with vocalist Rod Stewart and Ronnie Wood on bass; three more albums under The Jeff Beck Group banner followed before the guitarist teamed up with Vanilla Fudge bassist Tim Bogert and drummer Carmine Appice for an album in 1973.

The guitarist would go on to release albums regularly throughout his career, up to and including "18", his 2022 collaboration with Johnny Depp; he recorded with a variety of artists through the years, including Wonder, Roger Waters, Mick Jagger, Tina Turner, Diana Ross, Kate Bush, Joe Cocker, Ozzy Osbourne and ZZ Top, among many others.

Read more and stream "Shape Of Things" and "Beck's Bolero" (from "Truth") and watch the official video for "People Get Ready" (with Rod Stewart) (from Beck's 1985 album "Flash") here.