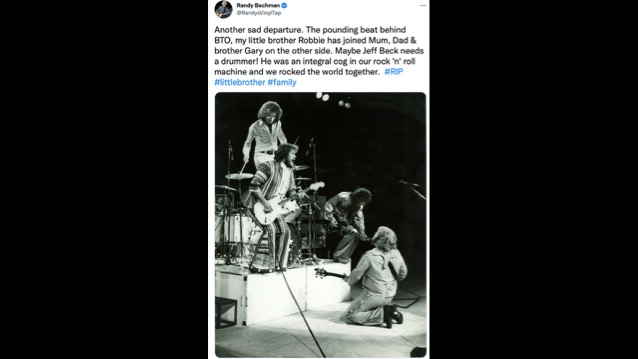 Randy wrote, "Another sad departure. The pounding beat behind BTO has left us. I just got a call from Fred Turner and my youngest brother Robbie has joined Mum, Dad & brother Gary on the other side. Fred said maybe Jeff Beck needs a drummer to play with. He was an integral cog in our rock 'n' roll machine and we rocked the world together."

BTO was formed in 1973 from the ashes of Randy's first post-Guess Who outfit, Brave Belt, with the lead guitarist joined by brothers Tim on rhythm guitar and Robbie on drums alongside bassist/vocalist Fred Turner.

Robbie was credited with designing the band's' logo, which first surfaced on their 1973 self-titled album while the project went on to reach the Top 10 in their native Canada with the help of constant touring; a second record was issued before year's end that saw the singles "Let It Ride" and "Takin' Care Of Business" earn top 5 status at home and Top 15 in the US.

The groundwork for more success was set when BTO released "You Ain't Seen Nothin' Yet" as the lead track from 1974's "Not Fragile"; the song topped the charts in several countries, including US and Canada, while Blair Thornton replaced Tim Bachman on second guitar.

BTO would win four Juno Awards in their homeland during their 1970s run; the lineup of Randy, Robbie, Fred and Thornton was inducted into the Canadian Music Hall Of Fame in 2014.

Get more details and stream some classic BTO hits here.