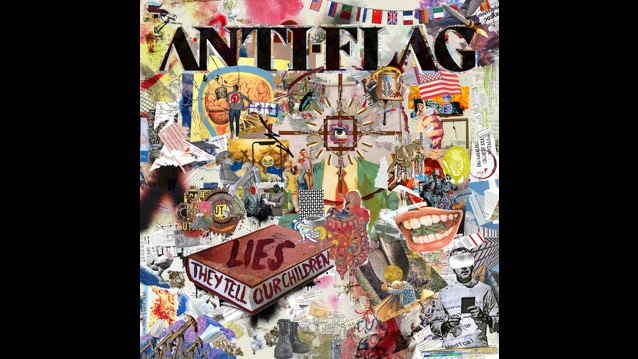 Anti-Flag marked the release of their brand new studio album, "Lies They Tell Our Children, by sharing a music video for the track, "Sold Everything".

The punk veterans are also celebrating their 30th year together in 2023 and had this to say, "2023 - 30 years of Anti-Flag. If we're being completely honest, this milemarker of longevity is both unbelievable to us and at the same time not a shock at all.

"The four of us have committed our lives to these songs, shows, and records. We have placed precedence on this work and believe it to be intrinsically tied to our value as people on this planet. If you would have asked the kids who started this band if we would still be Anti-Flag 30 years later, we would have probably thought we wouldn't make it this long. But we would have collectively resounded that as long as we're alive, we would be making music with the goal of unifying people and communities, positioning empathy over apathy, and using everything at our disposal to be agitators and disruptors of status quo, exploitative, capitalist politics."

"Lies They Tell Our Children represents a band that is still working on its craft, and we challenged ourselves to be better songwriters, leaving familiarity and comfort zones. Perhaps it's too ambitious to make your 13th full-length album a concept record, but if we have learned anything through our privileged lenses of longevity, it's to be true to ourselves. This was our plan. A record that is fulfilling emotionally and spiritually, we basically said 'F*** it, this is the record we wanted to make, the people we wanted to collaborate with, the type of song we want to play live and share across the globe.'"

"It's a shot of optimism and inspiration to carry on, stay the course, created because it's what we have to do. We hope that people like it, listen to it, stream it, or whatever... but truthfully, we would be doing all of this with or without an audience, it's all we have known as Anti-Flag for 30 years and we don't see that changing any time soon." Watch the video below: