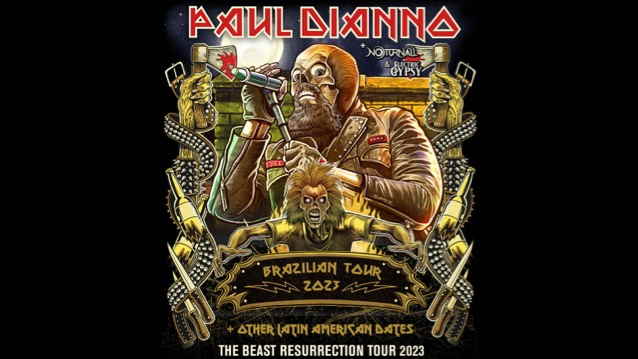 Former Iron Maiden frontman Paul Di'Anno is preparing to launch a South American tour at the end of the month and two stops on the trek will feature a guest appearance from "the big Maiden family".

Di'Anno's caretaker Stjepan Juras shared the news via social media. He wrote, "It's time for something very special. At the end of January, Paul Di'Anno will embark on 'The Beast Resurrection Tour', which will cover a large part of Latin America.

"After a successful leg operation, it is now time for constant walking exercises and physiotherapy. As the crowding campaign for Paul's recovery is over, he is leaving Croatia in two weeks and returning to the UK, from where he is starting this tour.

"At the concerts in Sao Paulo and Belo Horizonte, we announce a special guest from the big Maiden family, which will delight many fans. This tour will also have special t-shirts with a new visual, and a carefully designed tour book.

"We will soon publish a list of all support bands outside of Brazil, as well as many other details.

"Paul thanks you all for your support and says that this tour is a victory for him and a big mental milestone that will give him extra strength to complete his recovery. Namely, he still has a few months of work left before he can fully stand on his feet. Expect new dates and new continents in the very near future." See the dates here.