Singled Out: The Mayor's Quit While You're Ahead 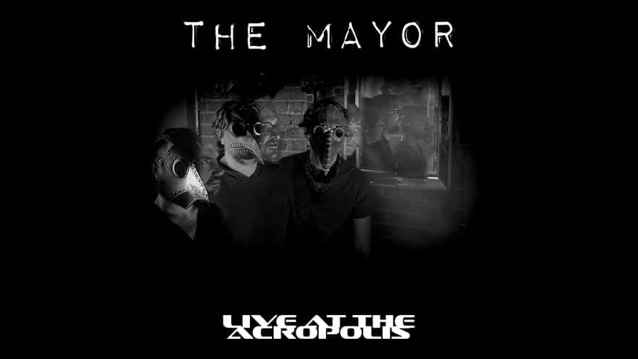 The Mayor (Joe Occhiuti of Ice Nine Kills, Mike Abiuso of The Venetia Fair and James Ryan Porches( just released a new EP and to celebrate we asked James to tell us about the track "Quit While You're Ahead". Here is the story:

Most of our recording sessions for The Mayor's latest EP, Live At The Acropolis, started somewhere around 8am, which is a funny time to go crank out some of that undistilled heavy metal syrup. One of my favorite tunes on it is called Quit While You're Ahead and it's one of those tunes that sorta wrote itself. Most of these new songs were written on the spot, but I remember this one being much slicker in its flow from idea to finished form. Mike was running the production and engineering for the recording session, so he was running back and forth between the Control Room and the Live Room to write his guitar parts while Kev and I were piecing together what the skeleton of the song was becoming. Being in the room with those two is radical in terms of our chemistry, we have a long history growing up playing together - it's really a pleasure to play with them.

Being that we were writing in the earlier hours of the morning, Mike and I would often sit down while working the chords out. When the last part of that particular tune came around, which is basically Kev drumming different feels into a halftime breakdown around our repeating guitar parts, Kev joked that I kept standing up for the breakdown. Damn right I was - that felt damn good. That's the energy of the unspoken musical bits. These tunes were a big release energetically, I had definitely been riding the struggle bus during the Great Quarantine so being able to write this with The Mayor was so sweet to explain how we were feeling not just exclusively through word but more through rhythm and melody, that's my greatest memory of this batch of songs. That's why The Mayor called you down here today.

Related Stories
Singled Out: The Mayor's Quit While You're Ahead