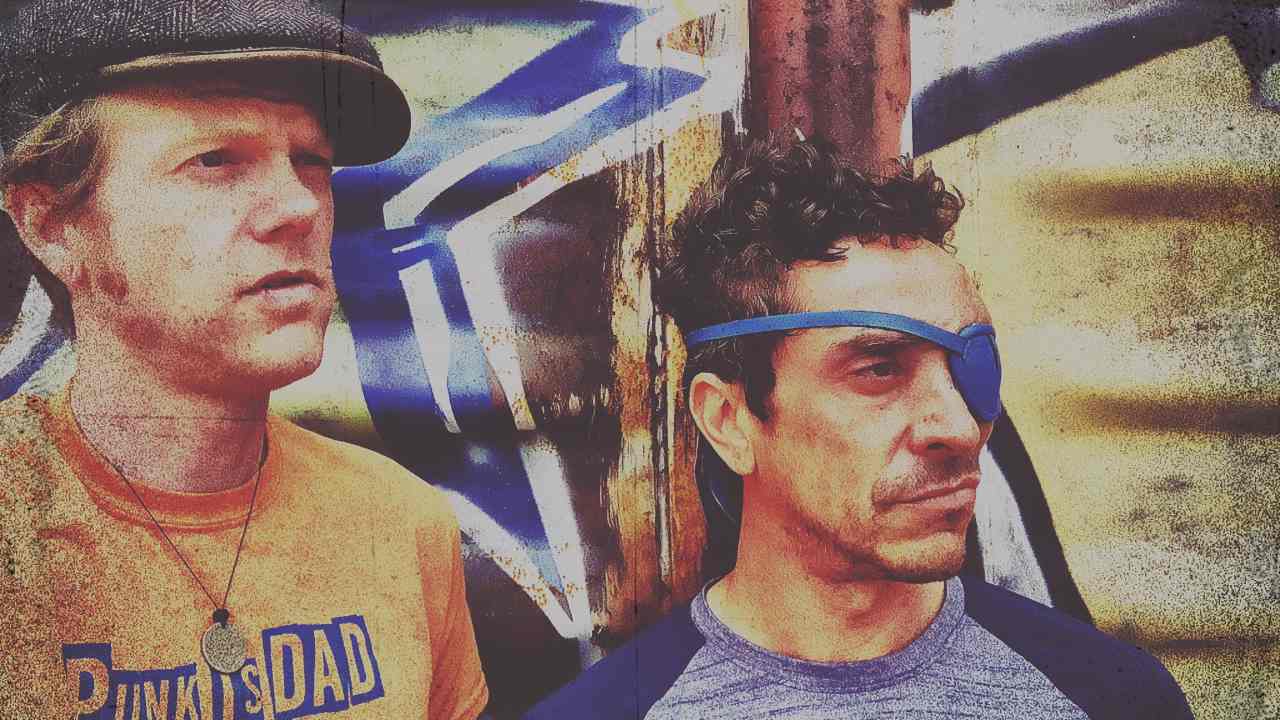 Daniel and Clay, the day after his eye extraction ceremony.

Alt country rockers Gasoline Lollipops just released their new album "All The Misery Money Can Buy" and to celebrate we asked frontman Clay Rose to tell us the moving story behind the song "Flesh and Bone". Here is the story:

My friend, Daniel and I have been best friends since we were 6 years old. We attended a private school together in Boulder, Colorado and it was apparent right away that we were the black sheep of the school. My father was a single parent, raising me on a truck driver's income. He felt very strongly about my schooling, which is why he spent a third of his income on it. Daniel's parents were divorced by the time we were in the 2nd grade, and it wasn't pretty. Compared to us, the rest of our classmates led seemingly, blessed lives, and I suppose we resented them for that. Looking back, I can see that we were a couple of overly-sensitive boys who desperately needed the love of a mother. But what we felt at the time was more like full grown rage trapped in the bodies of children. We raised a lot of hell.

By the time we were 16, we had both been expelled, arrested, and institutionalized. We were budding little punk-rock drug addicts, gearing up for a brief and blinding Roman candle existence. Fortunately, it only took 6 years for us to ride that train right off the rails, and at 22 years of age, some crazy grace stepped in and we both got clean and sober. Daniel had almost lost an eye in a drunken car wreck, and I had almost lost my life on many occasions to insanity and drug abuse. For the first 3 years of our sobriety we lived together. Daniel acted as my music manager and we toured coast to coast. I played as a solo, acoustic punk act for some of the worst gigs I've ever played. It was what they called "paying your dues." Then Daniel relapsed.

Over the next 4 years we stayed in touch but we kept our distance. We were living very different lifestyles. We both got married and Daniel got divorced. Then I relapsed. The next 7 years made all our previous debauchery look like child's play. And it was. This wasn't fun anymore. More times than not, it was just plain tragic. Broken hearts, broken bones, warped minds, sick bodies. We knew we had to stop but this time grace didn't come. My wife and I had a baby boy. I thought, "Surely, I can get clean for his sake." I couldn't. Eventually, grace did knock on my door. But she told me she couldn't stay. She was only there for the day. I took that day for all it was worth. I held on to it so tight that it turned into tomorrow. And like that, one day at a time, I managed to string a couple of years together. I cleaned up what wreckage I could, and my family miraculously survived it. Grace didn't come for Daniel though.

Instead, in November of 2017, Daniel unintentionally re-enacted the car wreck that had almost taken his eye 15 years earlier. He flipped his car multiple times going 100mph into a steep gravel embankment. He wasn't wearing a seatbelt. The paramedics called it "facial de-gloving." He spent the next 2 years in near back-to-back surgeries. The doctors tried to save his eye, but In Spring of 2019, I flew out to California to be with him for the extraction. Although he has been sober since the accident, it has not been easy. Depression, regret, chronic pain, and isolation were all recurring themes of the first 2 years of his sobriety. He and I had some healing of our own to do, and over this time we reconnected and became fast friends again.

On the last day of Gasoline Lollipops' recording session at Dockside Studio in Lafayette Louisiana last November, I woke up in my room above the studio to the sound of Donny (our guitarist) blasting his Telecaster through a gazillion watt amplifier. This is how I woke up every morning at Dockside. But on this morning Donny was playing a riff I'd never heard before. When I came down stairs he said, "Hey, why don't you throw some lyrics on this real quick and we can put it on the record this afternoon?" He was joking of course. We didn't write that way. We took months to hammer songs out over endless revisions and debates. Or at least that's how we wrote before that morning. I took my guitar outside and walked around the swampy property of Dockside, complete with Spanish Moss and Cyprus Trees. I was thinking of Daniel. We had spoken on the phone the night before and he was having a rough time of it; unsure of who he was and what he was worth. I wanted to remind him. "Flesh and Bone" spilled out of me in an hour, and just like Donny said, we put it on the album that afternoon. Some months later, I asked several radio program directors around the country to listen to the album and give me their top 3 picks for singles. "Flesh and Bone" made everyone's list. Ain't that somethin'?

When I asked Daniel if he was okay with this story being published, he said, "Well, I can't save my ass and my face at the same time, and half of that decision was made for me already." Here's to all the Roman candle kids doing whatever it takes to save their asses.

"All we have is just on loan; this flesh and bone."