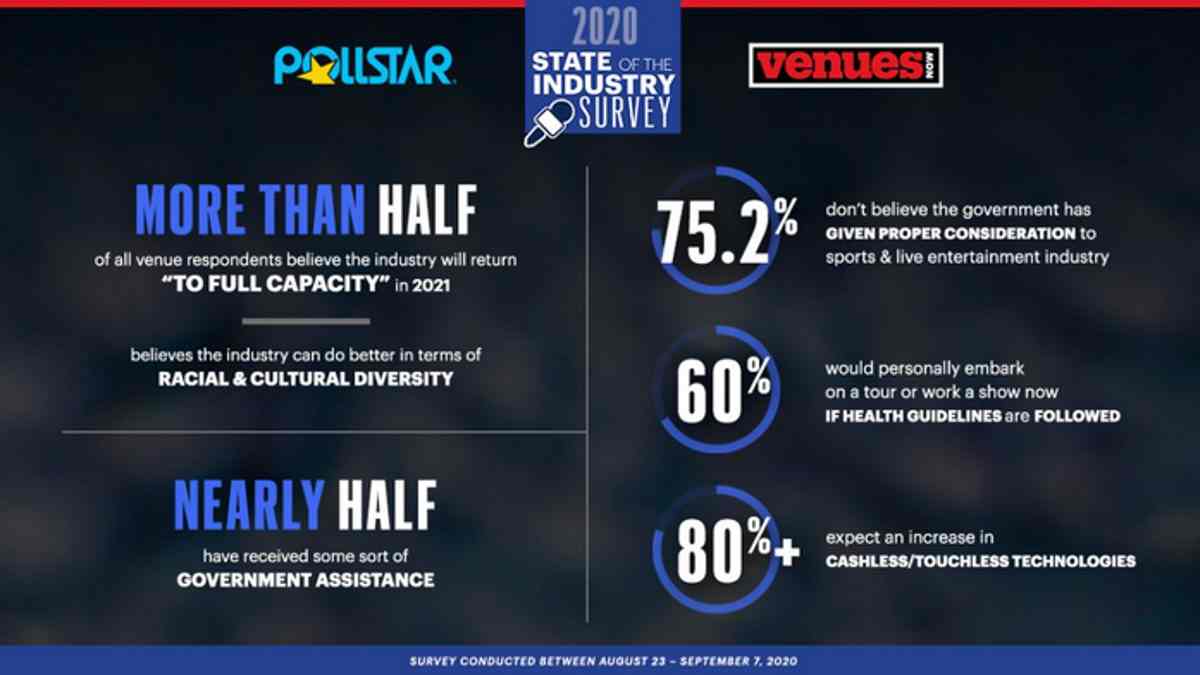 A new poll of live music industry insiders shows that a majority expect that concerts will return to "full capacity" in 2021, following the massive shutdown due to the Covid-19 lockdown this year.

That was just one of the findings in the The Pollstar and VenuesNow 2020 State of the Industry Survey, which was released late last week. We were sent the following details:

The largest live industry study of its kind, more than 1,350 live industry professionals, including venue management, promoters/talent buyers, production and concert support services, ticketing, performers, artist managers, booking agents and agency staff, record labels, publicists, security staff, and more, were polled on three primary subjects. These areas included how the live industry is managing during the pandemic and economic crisis; what the industry's comeback will look like; and social issues, inclusivity, and diversity within our industry.

The survey yielded a treasure trove of data including critical insights into the current state of the industry, a road map for recovery, a mandate for greater diversity and far more. It can be viewed at the Pollstar 2020 State of the Industry Survey hub.

"We embarked on this survey project with the goal of taking the pulse of an industry that has not only been hammered by the pandemic like few others, but also to discover their views on the social unrest from their unique perspective as purveyors of the cultural touchstone that is live entertainment," said Ray Waddell, president of OVG Media & Conferences, which includes Pollstar and VenuesNow. "While clearly there is a lot of angst and concern regarding the realities of both our social issues and the future business of live, there is also much hope and optimism that this industry we love can not only return to greatness, but also return as a more diverse and equitable business than ever before. We thank all those who participated in this unprecedented survey."

Highlights of the survey include:

More than half of all venue respondents, 54.8%, believe the industry will return "to full capacity" in 2021.

75.2% responded that they do not believe the government "has given proper consideration to the plight of the sports and live entertainment industry as compared to other impacted industries such as airlines, hotels, restaurants/retail."

Approximately 60% say they would personally embark on a tour or work a show now if health guidelines are followed (17.6% of those would work unconditionally).

More than 80% expect an increase in cashless/touchless technologies.

More than 72% of respondents expressed "concern about their company's ability to survive COVID-19."

Nearly half of those responding said they have received some sort of government assistance during the pandemic.

Indicative of their love for this industry, more than half said they have not considered leaving the live entertainment business and less than 3% have embarked on a new career outside of live.

Interestingly, more than 60% of respondents believe their own company is at least "somewhat" diverse and inclusive.

Pollstar states on the survey hub: "We are grateful to the more than 1,350 live industry professionals who participated in Pollstar and VenuesNow's 2020 State of the Industry Survey, the largest live industry study of its kind. It has yielded a treasure trove of data, including critical insights into the current state of the industry, a road map for recovery, a mandate for greater diversity and far more.

"In mid-March, to paraphrase country music icon Alan Jackson, the world stopped turning, or so it seemed. The live industry, an industry based entirely around social gatherings, stopped on a dime after a global pandemic hit our shores. Every tour, show, concert, sporting event, festival, convention, theater production, really any performance at all with an audience, came to an abrupt halt.

"This after a record-setting Q1, which saw Top 100 Worldwide Gross revenues rise 10.9% over 2019's record-setting gross of $757 million to $840 million with ticket sales up 4.5% to 9.4 million. Based on Q1's rate of growth, Pollstar projected the year's total industry box office losses for live, beyond the Top 100 Tours, would reach some $8.9 billion in revenues for rest of 2020, which, unfortunately, is largely where we stand now."