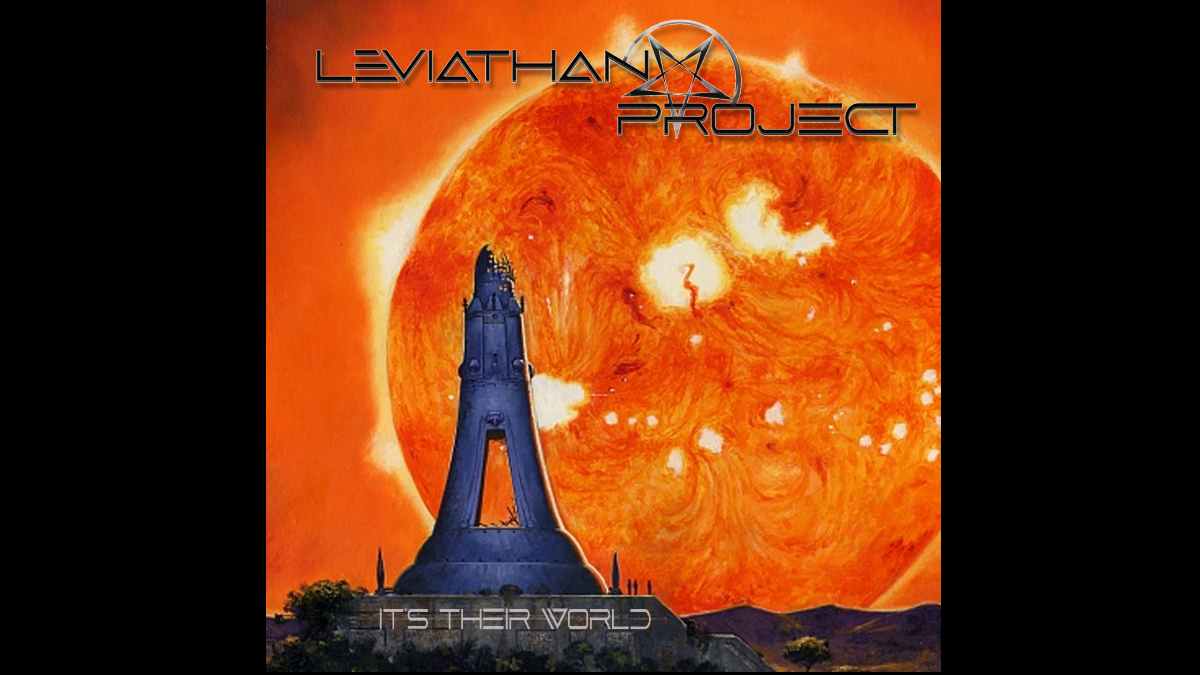 Leviathan Project, featuring Bobby Koeble (Death), Matt Nardo (Producer), Tk and Tim "Ripper" Owen (ex-Judas Priest guest vocals), release their new EP "It's The World" this week and to celebrate we asked them to tell us about the song "Solar Storm". Here is the story:

"It all started with my restless energy," says TK. I just always need to be doing something or I go crazy. So I had a few old metal riffs that were hanging around for a while. For me, it starts with sounds. I get bored really easily. Indeed, TK's restless pursuit of music has been in action for a long time. Through endless bar band mayhem, even a stint with the Glam Metal band Britny Fox, TK has spent his share of time in the musical trenches.

TK goes on, "I had a contact that knew Ripper and suggested him to sing on the track Leviathan. I sent him an email and asked him if he wanted to sing on a few songs. There was just one hitch, the songs weren't completely finished.

"Well, I had these songs and the general lyrical concept but I needed someone to bounce them off of. That's where Matt [Nardo] came in. We played in a band together years ago and remained friends. So I called him up and asked him to take a stab at some lyric and melody ideas. I also wanted him to sing the tunes so that we could hand them over to Ripper, giving him a solid starting point."

As the project took shape, and it did relatively quickly, TK also brought in Bobby Koeble, guitarist extraordinaire (ex Death) to cover the lead guitar parts with surgical precision.

For Leviathan Project, a few of the right chips fell into place- so to speak. Some meetings transpired, and a deal was secured with the DEKO Entertainment.

TK reflects, "It's hard to imagine that, four people, living in three different states, could successfully collaborate during a global pandemic. I think we managed to do something cool here."

This music fits into the genre but it brings with it an effective balance of melody and power. If you look beneath the surface, you may even find some lyrics that speak to the human condition.

The song, Solar Storm started with a Black Metal Style guitar sound. I was using an old school Boss heavy metal guitar pedal searching for tone. I didn't know exactly what that tone was but when I landed on it, the sonic groundwork for the whole song was in place. This is the guitar that starts out the song. It's abrasive, dark and creates a mood. I think it give you a feeling of uneasiness. I went on to craft the rest of the music knowing that we would have to come up with really visual lyrics and melodies to complement the music.

I gave the finished basic track to Matt Nardo (Bass/Co-Writer) to come up with additional lyrics and melody. Matt took my general idea about a relationship in a deep space setting and ran with it. When he sent me the rough track with the finish lyrics and his vocals I was blown away. Matt has a fantastic voice in the vein of Don Dokken or Paul Stanley, a lot different that Ripper. We got really attached to the demo especially when a few friends heard it and gave it great feedback. I wasn't sure how Ripper would be able to do more with it.

Before I give anything to Ripper, I try to have the song finished which includes Bobby's guitar leads. This gives Ripper a clear picture on the overall feeling and energy of the track. So, I sent Bobby Solar Storm with no comments other than do what you do. Bobby is a true professional and plays in many different styles so giving him virtually no instruction is never an issue. I think Bobby spent the most time with this song because he did 3 lead sections and included harmony guitars. If you love old Vinnie Moore and Tony MacAlpine you will love what Bobby plays! His playing on this track is literally Other Worldy. There is no other way to explain it. Just listen.

The final ingredient to Levithan Project songs is usually Ripper. We present him with a finished track including guide vocals and he does his thing. Sometimes I forget how talented and how much experience Ripper has. You have to remember he is the guy that replaced Rob Halford in Priest!! He always has full creative control to change lyrics and melodies as he sees fit. On Solar Storm he stuck close to Matt's guide vocals which is a testament to Matt's contribution. A few days go by and Ripper sends me about 12 tracks of vocals. I call it 12 tracks of Ripper gold. Working with him is just so easy. Not much conversation happens with any of us. We just communicate through the music. Again, just listen