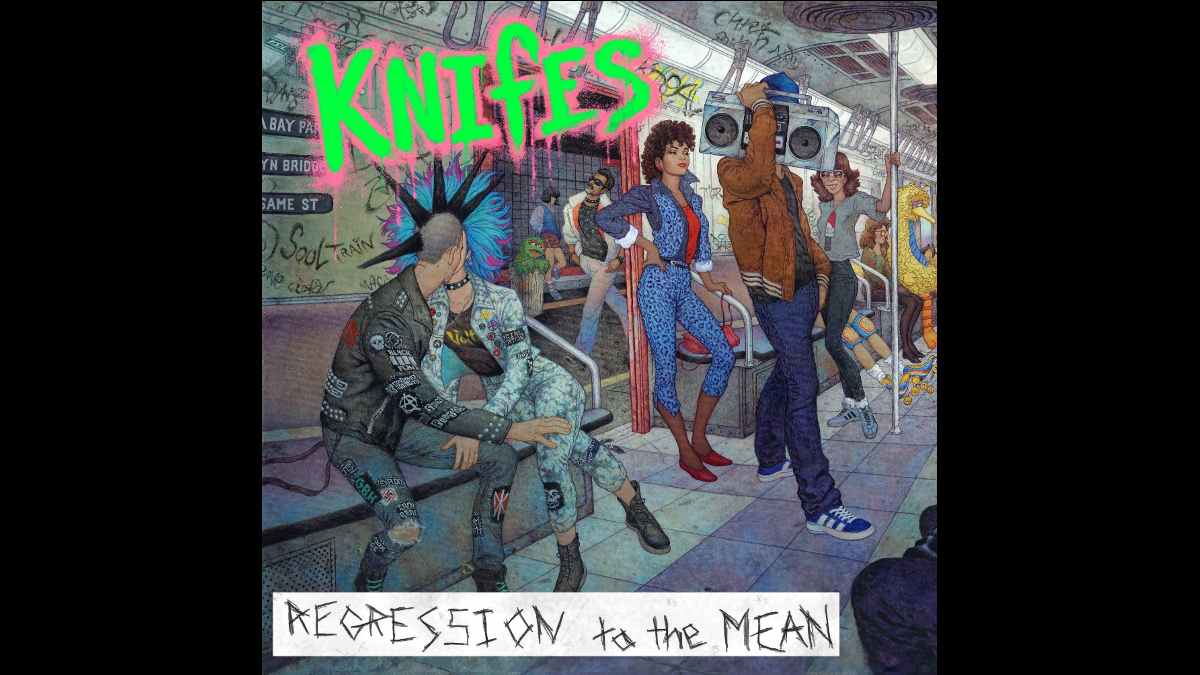 Supergroup roadie trio Knifes are releasing their sophomore EP "Regression To The Mean" this week and to celebrate we asked Ben Young (vocals and guitar) to tell us about the song "Scammers". Here is the story:

"Our song 'Scammers' is a serial killer. It lures you in with its catchy riffs and melodies but will leave you bleeding out in a ditch if you let your guard down. Around the time we were writing this song I was watching a Ted Bundy documentary. I find him very intriguing because he was so gentlemanly for such a horrific person. The gentlemanly serial killer theme began floating around in my head. Separately, we had the instrumental for Scammers worked out, but no lyric and melody yet. Its working title was 'Scammer's Gonna Scam,' because we were all obsessively watching a show on Netflix called Scam City, where the host travels the world trying to get scammed in famous tourist locations. Even though I had no lyric or melody yet, the theme of impropriety was linked to the instrumental in my head. Sometime later a friend of mine was talking about a girl he was obsessed with and said, 'I'm gonna f*ck that girl even if it kills me.' It all clicked for me right there. That was the serial killer angle I was looking, a person that uses all his charm, and puts on a front of who he is, to get what he wants in the end.

Once I had this theme to work with the lyric and melody came together pretty quickly. I was looping the instrumental chorus on my computer as I was trying to come up with vocal ideas. The line 'Hanging over my head like a halo,' kept coming out. I knew it sounded cool, but once I realized it also represents the burden of pretending to be something to get what you want, it became the perfect hook. When writing first drafts of a song, I've learned to listen to my subconscious and let it flow. Sometimes you get a bunch of crap, but other times you see a pattern start to emerge that becomes worth exploring. At the risk of sounding like a hippie yoga instructor (shoutout to Darby), that's when the song reveals to me what it want's to be about and I take that baton and run with it. This song wanted to be about bad people doing bad things.

Other parts of the song take on another perspective. Portions of the verses are from the perspective of the prey; the one being scammed. It's about ignoring your intuition when you know you're in a bad situation. You know you should run away, but you also might embarrass yourself in front of this person that may or may not be trying to murder you, and embarrassment is worse than death. The other half of the verses are the killers internal dialog knowing that they're about to capture their prey. This whole song teeters on the tipping point of life and death, just before you help Buffalo Bill put the couch in the van.

In Knifes music I'm constantly paying homage to other influences. This is also known as 'completely ripping off.' If one of our songs reminds you of something else, it's probably not an accident. If I notice I'm sounding like something, I lean into it. The verses of 'Scammers' were kinda sounding like Mike Patton in Faith No More's 'Epic,' so I went with it and tried to affect my best impression while still being me. The line 'I'm a one way road, I'm a loss, I'm a scam,' was written to be a hidden easter egg homage to the line in Epic, 'It's magic, it's tragic, it's a loss, it's a win.' The vocals harmonies in choruses two and three are my take on the harmonies in Nine Inch Nails 'The Perfect Drug,' and the main guitar riff is partially inspired by Biffy Clyro's 'Stingin' Belle.' It's not super obvious, but that's what was going on in my head when I wrote it.

As far as the recording of "Scammers" goes, we flew in under the radar again and tracked drums at a big fancy expensive studio that a band we worked for was recording at (please don't tell them-they still don't know). The guitars and bass were recorded at home using a Fractal Axe FX2, and the vocals were recorded in a bedroom in a fort made of blankets and mattresses.

This song is pretty hard for me to sing/yell and I wasn't really happy with how I was singing the choruses at home in my vocal fort. A few weeks later I was at my friend Esjay Jone's place. We were writing and recording for her project We Are Pigs. I asked her if she could produce/engineer me singing the chorus. It was her idea for me to just go off at the end of the last chorus and yell the last line as high as I could. At first I wasn't into the idea. I didn't think it was right for the song, but I gave it a go and eventually it grew on me. Now I can't hear the song without it.

I hope you enjoy 'Scammers,' and just to be clear, I am not a serial killer...probably.