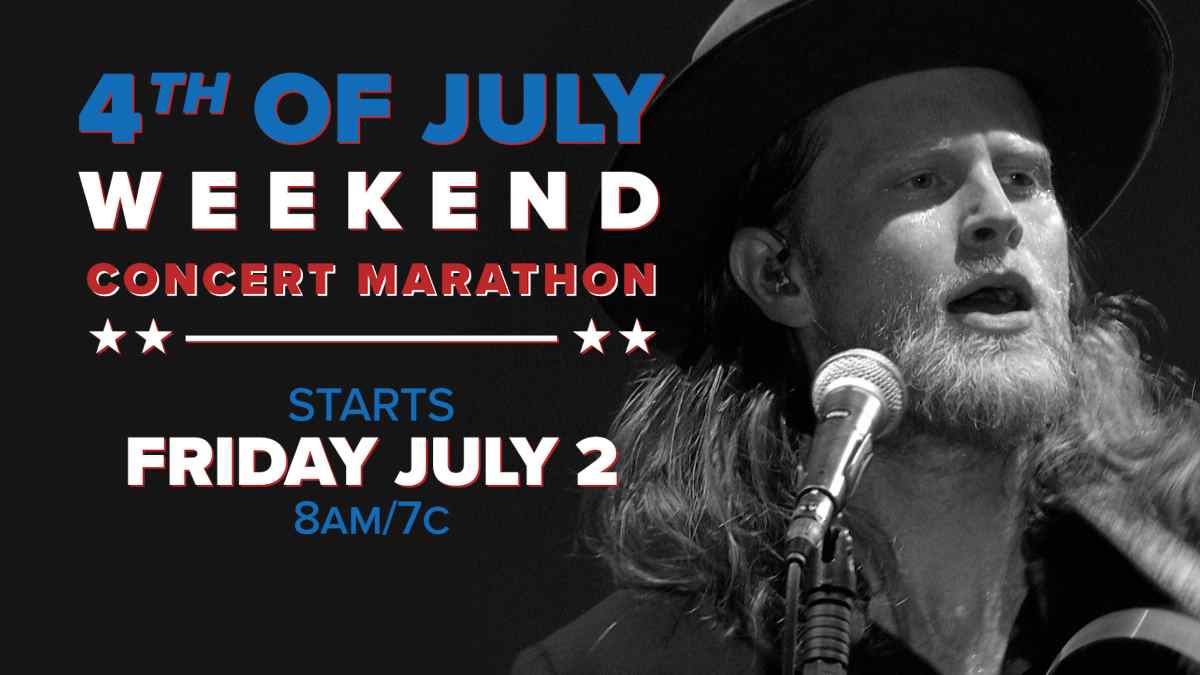 AXS TV have announced that they will be celebrating this 4th Of July weekend with four days of nonstop concerts, including the network premiere of performance from Kid Rock, Ellie Goulding, The Lumineers and more.

The network sent over the following details: Powerhouse performances from some of music's biggest names will be starting Friday, July 2 at 8 a.m. ET/5 a.m. PT and running through Monday, July 5.

The "All Day Concerts" block begins on July 2 with the ultimate classic rock lineup, opening with premier percussionist Ringo Starr putting his unique spin on beloved Beatles tunes such as "Octopus' Garden," "Yellow Submarine," and "With A Little Help From My Friends," and solo favorites such as "Choose Love," "It Don't Come Easy," "Give Me Back The Beat" in Ringo Starr And The Roundheads With Special Guest Colin Hay. Other highlights include trailblazing superstars The Who performing their magnum rock opus in its entirety in The Who: TOMMY - Live At The Royal Albert Hall; Tom Petty's hometown return in Tom Petty - Live From Gatorville; an evening with one of the blues' foremost figures in B.B. King With Special Guests Terrence Howard, Richie Sambora, and Solange; and a soulful show from "The Queen Of Rock N' Roll" in Tina Turner - Live In Barcelona, among others.

"All Day Concerts" goes Country on July 3 with a Saturday lineup full of cowboy classics and southern rock anthems, featuring the star-studded tribute event George Jones: 50 Years Of Hits; a homecoming for the ages in Dierks Bentley Live From The Ryman Auditorium; career-spanning sets from Willie Nelson, Tim McGraw, and Travis Tritt, and more. The evening is headlined by the premiere of Kid Rock: Live From The Artists Den, as the patriotic performer rolls into one of America's most important musical landmarks-Elvis Presley's Graceland-to deliver an intimate acoustic jam session with his band Twisted Brown Trucker in the legendary Jungle Room, before cruising over to the Elvis Presley Automobile Museum for a definitive set packed with signature hits such as "Cowboy," "Bawitdaba," "Born Free," "Care," and more.

Then, AXS TV presents the perfect prelude to fireworks with a July 4 block that finds The Eagles soaring Down Under with an epic 2.5 hour set in The Eagles: Farewell - Live From Melbourne; Fleetwood Mac bringing the Say You Will Tour to Beantown in Fleetwood Mac, Live In Boston; and Pearl Jam's two-night stint in the Windy City in Pearl Jam: Let's Play Two. A three-pack of premieres follows at 8 p.m. ET, featuring pop quintet Maroon 5's electrifying set in the City Of Lights featuring "She Will Be Loved," "This Love," and "Harder To Breathe" in Maroon 5: Live At Casino De Paris; international pop sensation Ellie Goulding taking over the Citadel of Arras with chart-topping staples "Lights," "Anything Could Happen," and "Love Me Like You Do" in Ellie Goulding: Live At Main Square Festival; and folk heroes The Lumineers showcasing their raw rock energy with charged performances of "Flowers In Your Hair," "Classy Girls," and the singalong smash "Ho Hey" in The Lumineers: Live At Musilac.

"All Day Concerts" closes out on July 5 with eight unforgettable concerts, starting with Sugarland's heartfelt set at Chicago's historic Grainger Studio where they pay homage to their Atlanta roots with performances of "Stay," "Baby Girl," and "Everyday America" in Sugarland: The Incredible Machine. Other highlights include a front row seat to Country trailblazer Shania Twain's coveted Las Vegas residency in Shania Twain - Still The One; rock icons coming together for an important cause in America Salutes You: Guitar Legends 4, with Big & Rich, Kevin Bacon, Billy Gibbons, and more; and a one-of-a-kind event capturing Bon Jovi as they perform their 2020 album in its entirety for the first time ever in On A Night Like This - Bon Jovi 2020.

The Lumineers Raise Over $600,000 With Colorado Gives Back

Dave Matthews Band and The Lumineers To Headline Sea.Hear.Now