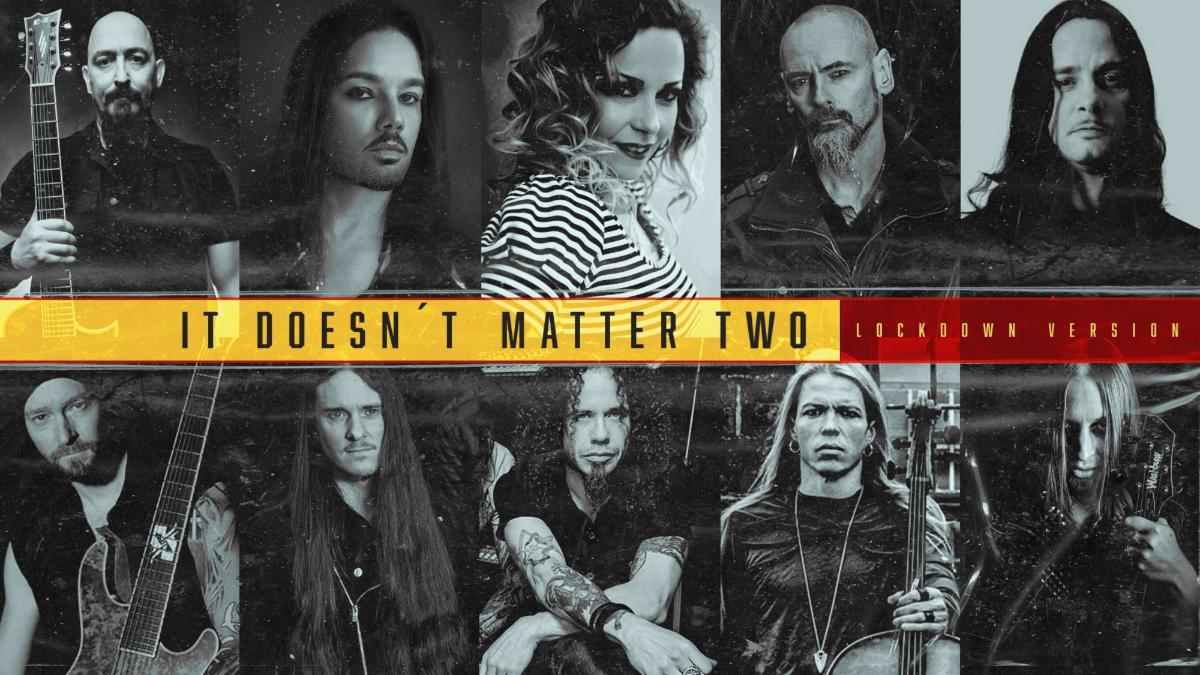 An impressive list of metal stars teamed up with Libra to make a cover of the Depeche Mode classic "It Doesn't Matter Two", which will benefit the International Association for Suicide Prevention.

Libra had this to say, "Since I was a kid, Depeche Mode has been one of the biggest influences of my musical development. So I chose, and completely re-arranged, one of my favorite songs, called 'It Doesn't Matter Two' from the album 'Black Celebration.'

"I only invited artists who I respect, admire, and even some of my personal heroes. I honestly felt I would be really lucky if only one of them agreed to be part of this project.

"So you can imagine how I felt when, one by one, almost everyone I invited replied saying yes (most of them without even knowing who I was), simply after hearing the demo I sent."

Some of the guest artists also commented on the track.

Anneke van Giersbergen: "Working with this group of amazing musicians on a song by one of my favorite bands has been truly amazing, especially in times like these."

Apocalyptica's Eicca Toppinen: "I immediately got very excited about this project when LIBRA contacted me. During this lockdown it felt so nice to get connected with cool artists around the world. All musicians are in the same situation during these weird times, no matter where you live. The original song is great and I loved LIBRA's arrangement and the passionate way of working on this project. The song turned out great and it is wonderful how the video shows the way we were able to be together even with the distance. Music has power!"

Athanasia's Caleb Bingham: "When LIBRA sent it to me, I was impressed by his ability to take a classic Depeche Mode song and completely reinvent it into something all his own. Now, with all of this top tier talent on top of what was already a killer song, I think we've created a monster!"

Moonspell's Don Aires Pereira: "I really enjoyed participating in this collaboration and seeing guys I hadn't seen in a while, as well as getting to know even if virtually new faces. It was a good initiative in these lockdown times and it also served to imagine what it would be like to play in a band with such illustrious musicians. Thank you very much to LIBRA for the invitation. I really enjoyed recording the bass and video in a very relaxed way. Thanks to today's technology, we can always create or materialize what we visualize and make it real. A hug and greetings to all who participated, and I hope you enjoy the final result. Life is an alchemical process in which we visualize and then materialize using the well-known formula: 'Solve et Coagula.'"

My Dying Bride's Aaron Stainthorpe: "Believe it or not but I was actually a member of the Depeche Mode Fan Club way back when 'Violator' was released," says My Dying Bride vocalist Aaron Stainthorpe. I adored the band and was the only person wearing a Depeche Mode sweatshirt in the notorious rock bar The Frog & Toad in Bradford. My Dying Bride also used a piece of music by DM as an intro to their gigs on one of their tours but my age won't allow me to recall which piece. When Libra asked me if I'd be interested in taking part in this project, a 'yes' was inevitable and I thoroughly enjoyed my little moment when, just for a short time, I was actually in Depeche Mode."

My Dying Bride's Shaun MacGowan: "I'd heard good things about LIBRA and his work, so it was a real pleasure when he invited me to join this project. I'm a Depeche Mode fan but never actually heard this particular song before, but instantly the potential to make something great was there. It's also hard to say no to being alongside a list of fantastic musicians from across the metal genre. Obviously, it would be nice to visit a studio but, due to COVID restrictions, my living room had to do! The end result is far beyond my expectations and it's been a real pleasure to be involved."

Paradise Lost's Aaron Aedy: "I got the initial contact from LIBRA last year, halfway through our first lock down of 2020 here in the UK. At the time, we in Paradise Lost, like our fellow musicians, were getting emails of constantly moving or cancelled shows and festivals. The prospect of doing a Depeche Mode cover (a band I've loved since buying the 'People Are People' single, aged 14) purely for the joy of making music, seemed like the perfect distraction during a time of seemingly mostly bad news. I agreed, then upon hearing the bare bones version, was pleasantly surprised how good it was, even at that very early stage.

Having been a part of this project from early on and watching it grow as more artists were added with LIBRA's energy driving it all forward, made this an absolute joy to work on, a truly wonderful escape from everything that's been going on in the world. I'm thrilled with the outcome, the amazing contributions from all the artists involved have really elevated this it to another level.

The fact that this was born out of the hopeful and fun lockdown idea of one person, which is now able to raise money for The International Association for Suicide Prevention, a charity whose work is even more important during a time when we're all becoming more acutely aware of the mental health issues experienced by so many, makes me feel even more proud and privileged to be involved. Listen, enjoy and escape with us for a few minutes! Thank you."

Within Temptation's Ruud Jolie: "I must admit I have never been into Depeche Mode but when I heard LIBRA's arrangement I got all excited. The demo sounded really good already. And it's a no-brainer when you learn that a lot of great musicians have joined the project. The end result sounds great and I feel lucky to be a part of this."

Born and raised in Rio de Janeiro, Brazil, LIBRA taught himself how to sing, play guitar, bass, drums, keyboard and studied music production and audio engineering. In addition to being a former Sony Music artist, where he released his solo album Ate que a morte nao separe, LIBRA has been worked as a music producer for film, TV and theater for over 20 years. Always proud to be eclectic, LIBRA's influences range from metal to pop, rock to electronic, and classical to country.

"Music has been my life since I can remember," says LIBRA. "But somewhere around 2014, due to a stream of traumatic disappointments (professional and personal), I lost the will to write and play music altogether and decided to turn my back on the music business. I moved to the US, where I slowly had to rebuild myself from the ground up, and when the time was right, I decided to let music find its way back into my life. This project was literally the first track I produced, after more than six years of artistic hibernation. The whole experience of having such talented artists trusting my vision was a wake up call, and the final result of this collaboration was a testament to the fact that I did the right thing when I decided to make music again." Check out the song below: