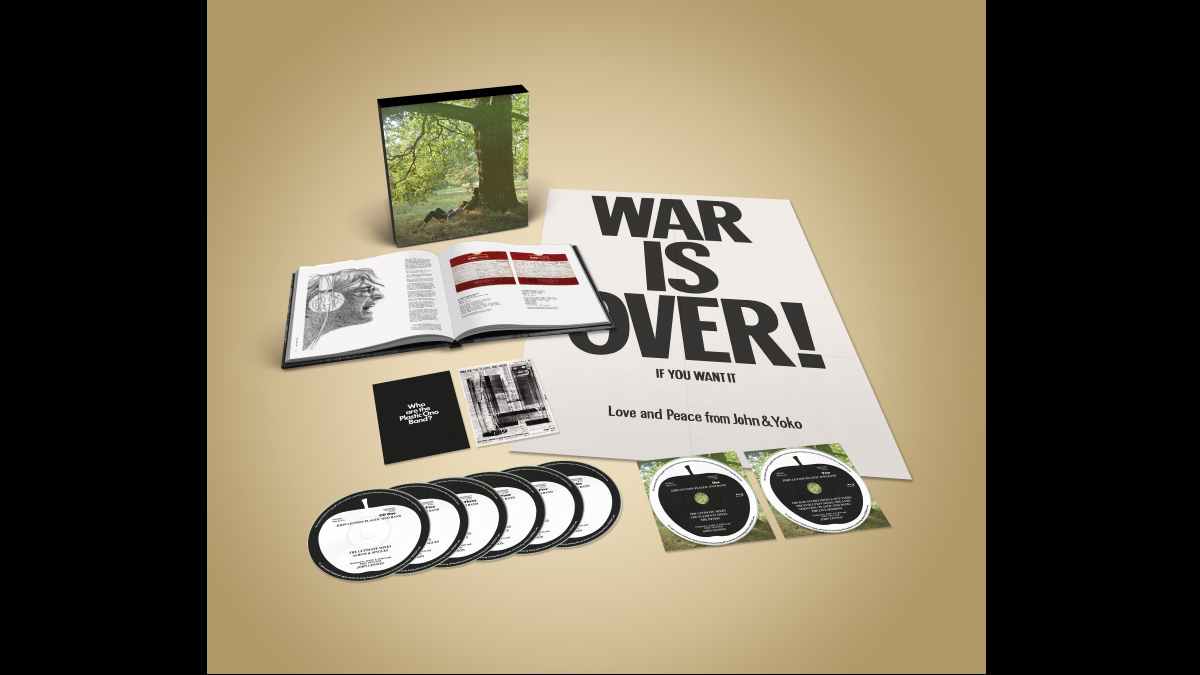 We were sent the following details: From the haunting, funereal bells and emotional wails of opening track "Mother," it was immediate - John Lennon's first solo studio album was unlike anything he had made before. Recorded in 1970, shortly after the demise of The Beatles, John Lennon/Plastic Ono Band saw John stripping away the artifice and ornamentation for a visceral artistic exorcism that was confessional, raw, painfully honest, and revelatory. Inspired by the primal scream psychotherapy he and wife Yoko Ono had been practicing with Dr. Arthur Janov, John, joined by the minimalist Plastic Ono Band - Ringo Starr on drums and Klaus Voorman on bass, and producer Phil Spector - confronted his demons, professed his love for his wife, railed against false idols and declared the dream was over on his most personal album. Today it stands as the towering achievement of his solo career - the moment the biggest rock star in the world bared his soul for all to hear - as real as it was revolutionary.

The eight-disc super deluxe box set, John Lennon/Plastic Ono Band - The Ultimate Collection, an immersive, deep listening experience and in-depth exploration of what John described as "the best thing I've ever done." Fully authorized by Yoko Ono Lennon, who oversaw the production and creative direction, and from the same audio team that worked on 2018's critically acclaimed Imagine - The Ultimate Collection, including triple Grammy-Award winning engineer Paul Hicks and mixers/engineers Rob Stevens and Sam Gannon, the Ultimate Collection puts listeners in the center of the studio and explores the album's 1970 recording sessions at EMI Studios 2 & 3, Abbey Road along with John's post-Beatles singles, "Give Peace A Chance," "Cold Turkey" and "Instant Karma! (We All Shine On)" from inception to the final master through scores of unreleased and rare demos, rehearsals, outtakes, jams and studio conversations, revealing how these beloved songs came to be. Everything in this expansive box set has been newly mixed from scratch from brand new 192kHz/24bit hi-res transfers. In addition to the various new mixes, the set boasts 87 never-before-heard recordings.

This historical, remixed and remastered collection features 159 tracks across six CDs and two Blu-ray audio discs for more than 11 engrossing hours of music and includes two postcards ("Who Are The Plastic Ono Band?" and "You Are The Plastic Ono Band") a "War Is Over!" poster and a comprehensive 132-page hardback book with lyrics, rare photos, tape box images, memorabilia and extensive notes. Designed and edited by Simon Hilton, the Compilation Producer and Production Manager of the Ultimate Collection series, the book tells the story behind each of the songs and the making of the album in John & Yoko's words and the words of those who worked alongside them, through archival and brand new interviews.

Yoko writes in the preface of the book: "With the Plastic Ono Band albums, John and I liked the idea of this really raw, basic, truthful reality that we were going to be giving to the world. We were influencing other artists, giving them courage, giving dignity to a certain style of vulnerability and strength that was not accepted in society at the time. It was a revolution for a Beatle to say, 'Listen: I'm human, I'm real.' It took a lot of courage for him to do it."

Plastic Ono Band will also be released in concurrent multiple physical and digital configurations, including as a 1CD that includes the Ultimate Mixes of the original album and the three non-album singles and as an expanded 2CD or 2LP version that adds a disc of outtakes of each song.

THE ULTIMATE MIXES
The original John Lennon/Plastic Ono Band album has been faithfully remixed from the ground up by the aforementioned Paul Hicks at Abbey Road Studios under the supervision of Yoko Ono Lennon. Hicks utilized high-definition 192kHz/24bit audio transfers of the original first-generation multitrack recordings to create the best possible recreations of the originals. The result is these new Ultimate Mixes now reveal whole new levels of sonic depth, definition and clarity, especially in 5.1 Surround Sound and Dolby Atmos. "Yoko is very keen that in making The Ultimate Mixes Series, we achieve three things: remain faithful and respectful to the originals, ensure that the sound is generally sonically clearer overall, and increase the clarity of John's vocals. 'It's about John' she says. And she is right. His voice brings the biggest emotional impact to the album."

THE OUTTAKES
The collection includes unreleased stereo outtakes of each song which have been mixed with a balance and EQ more akin to the original album mixes, with a little bit of additional effects - in the style of a "rough listening mix" that John & Yoko and Phil Spector would have used to play them back at Abbey Road. Highlights include "Mother" (Take 61) which removes the opening bell and has the drums mixed in mono, "Love" (Take 6) with John performing the song on acoustic guitar without the aid of Spector on piano and the first rehearsal of "Remember" (Rehearsal 1), which started off as a slower, more subdued, song than the rollicking one it evolved into, "Well Well Well" (Take 2) which ends with an instrumental jam, the alternate clawhammer strumming on "Look At Me" (Take 2) and "Cold Turkey" (Take 1) with some seriously funky guitar playing by John and Eric Clapton.

DEMOS
In addition to the outtakes, the original recordings of each song, either from a home cassette, home tape, or the very first rehearsal or run-through in the studio are included. It's remarkable to hear how fully formed many of the songs were before they were brought to the studio and what they transformed into. Most of these recordings have never been released until now.

THE ELEMENTS MIXES
The Elements Mixes mixed by Hicks bring some of the buried elements not otherwise heard, or in some cases used, up to the surface and presents them on a wider and brighter sound stage to reveal deeper levels of detail and clarity. The idea behind these is that once these elements have been heard listeners will hear details previously hidden in the album mixes in a completely way. These range from John's isolated vocal track for "Mother," the conga on "I Found Out," the extra vocals on "Hold On," the alternative organ take on "Isolation," unused maracas on "Well Well Well" and the original guide vocal for "God."

THE RAW STUDIO MIXES + OUTTAKES
Mixed by Rob Stevens, the Raw Studio Mixes transport listeners to the center of the studio at Abbey Road to experience what it was like to bear witness to the recording sessions. The songs have been mixed without effects, tape delays or reverbs, recreating as close to possible what these performances sounded like raw and live. The Raw Studio Mixes stand on their own to provide a markedly different set of listening experiences, stripping away the sound-shaping techniques that were used in the production of the original 1970 album to reveal further nuance and depths in these unadorned studio performances.

THE EVOLUTION DOCUMENTARY
The Evolution Mixes are mini-documentaries that explore the development of each song through their elements, arrangements and the musicians that play on them. Edited down from all the original 8-track multitracks, quarter-inch live recordings and mixes and a few demo cassettes by Sam Gannon, generally each Evolution Mix runs through each song's sessions chronologically, starting with the demos and/or early takes and ending with the final mixes; documenting their creative journey from inspiration to finished work, exploring different, sometimes hidden parts of the multitracks and including all the best method, magic, craftsmanship and conversation during the development of the songs. Throughout the sessions, there is a sense of lightness and joviality that contrasts the heavy and, at times, very intense themes which run through much of the album. These mixes provide a window into that world, putting the listener in the center of the studio with John, Yoko, Phil and the Plastic Ono Band.


THE JAMS
Despite the serious nature of the album, John and the Plastic Ono Band, which sometimes included Yoko, Billy Preston and Phil Spector, had fun in between takes by spontaneously jamming classic rock 'n' roll songs, improvisations and even early versions of some of John's other songs. For the first time, these 22 jams are being made available and are presented in the order they were recorded. Some of the many gems include impromptu performances of Chuck Berry's "Johnny B. Goode," Fats Domino's "Ain't That A Shame" Little Richard's "Send Me Some Lovin'" and a hilarious sendup of Elvis Presley, illustrating John's love for early rock 'n' roll. Other highlights include loose run throughs of "Hold On" and a couple early attempts of "I Don't Want To Be A Soldier Mama, I Don't Want To Die," which would end up on his next album, Imagine.

YOKO ONO/PLASTIC ONO BAND - THE LIVE SESSIONS
On October 10th, the day after John's 30th birthday, Yoko, John, Klaus and Ringo recorded a freeform experimental jam session that would be edited into Yoko's concurrent album, Yoko Ono/Plastic Ono Band. For the first time ever, the full session, more than three times the length of the original album, can be heard as part of the Blu-ray in its entirety. Newly mixed by Sam Gannon, it is being presented in high-res audio and in its originally performed speed with no edits, with tracks like "Why" clocking in at 18 mins and "Why Not" exceeding 21 minutes. The live session is bolstered by three improvisations that have never been released before: "Life," "Omae No Okaa Wa" and "I Lost Myself Somewhere In The Sky."