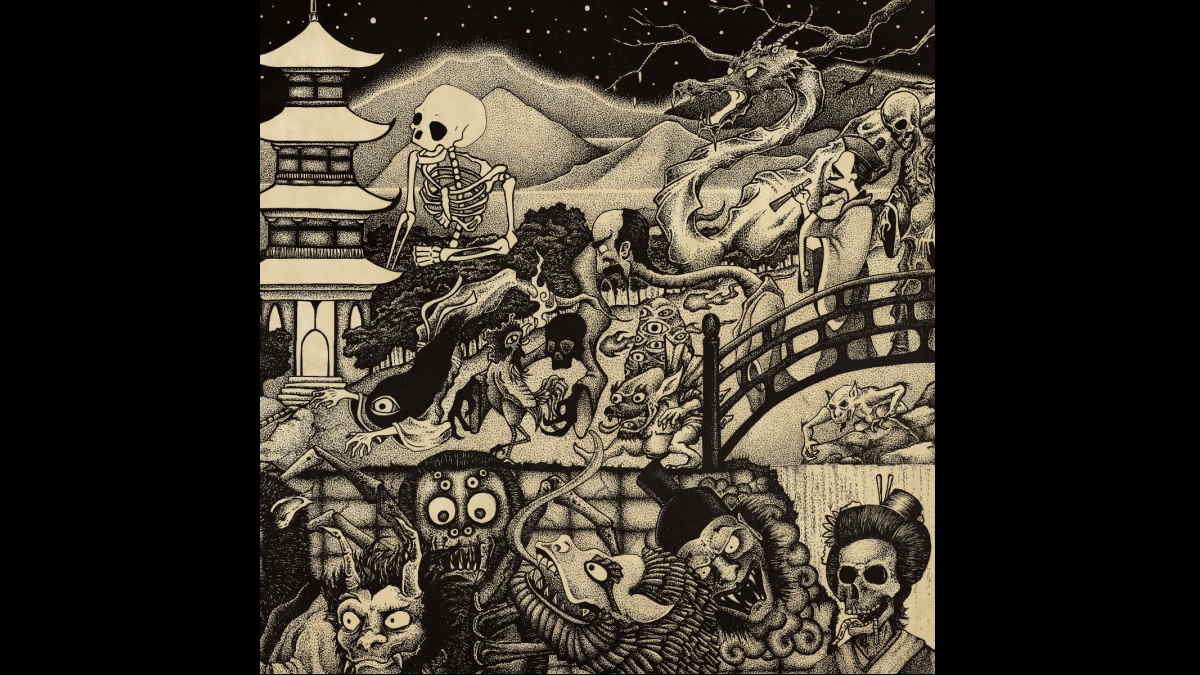 Earthless have shared a 3-minute preview for their epic new 20-minute long track "Death To The Red Sun". It comes from their forthcoming album, "Night Parade of One Hundred Demons", which will be released on January 28th.

The record will feature two tracks, the afore mentioned "Death To The Red Sun", and the even more epic 41-minute long title track. Nuclear Blast sent over the following background details about the new effort:

The album and its title were inspired by an ancient Japanese legend in which a horde of demons, ghosts and other terrifying ghouls descend upon sleeping villages at night, once a year. Known as Hyakki Yagyō, or the "Night Parade of One Hundred Demons," one version of the tale states that anyone who witnesses this otherworldly procession will die instantly-or be carried off by the creatures of the night. As a result, the villagers hide in their homes, lest they become victims of these supernatural invaders. "My son and I came across the 'Night Parade of One Hundred Demons' in a book of traditional Japanese ghost stories," bassist Mike Eginton explains. "I like the idea of people hiding and being able to hear the madness but not see it. It's the fear of the unknown."

Given the record's inspiration, it should come as no surprise that Night Parade Of One Hundred Demons strikes a more sinister tone than the rest of the band's catalogue. "It definitely has a darker, almost evil kind of vibe compared to stuff we've done in the past," Rubalcaba says. "There's more paranoia and noise, and some of Isaiah's whammy-bar stuff kind of reminds me of these Jeff Hanneman moments in Reign In Blood, where it just seems like everything is going to hell. It's pretty fun."

When Eginton wasn't tracking his bass parts, he worked on the album's incredible sleeve art. "He really dedicated himself to the project," Rubalcaba says. "He'd be drawing in the studio with, like, a coal-miner's lamp on his head while we were doing overdubs. He really knocked it out of the park." "I basically wanted to draw my interpretation of the folk story," Eginton explains. "I started researching the different Yōkai-the demons-and really got into it. It was really cool reading about where they came from and what their interactions with humans were. Then I tried to create what I imagined the event might look like. I didn't get a hundred in there, but I got quite a few."

Their latest is a return to the epic instrumentals Earthless made their unmistakable name on, whereas 2018's Black Heaven featured shorter songs and vocals from guitarist Isaiah Mitchell on much of the album-an unprecedented move for the trio. Black Heaven was recorded while Mitchell was living in the Bay Area, which made it difficult for the band to get together and work on the type of long instrumental pieces they're known for. But, in March 2020 -- specifically, the night the pandemic lockdown kicked in -- Mitchell moved back to San Diego from the Bay Area. Bad timing, perhaps-or maybe perfect timing.

"With Isaiah here, we were able to get together once or twice a week to work on these jams," Rubalcaba says. "We got back to our original songwriting process of just playing and building off each other little by little. And we actually had the time to do that, which was creatively inspiring." Plus, they were all on the same page about not wanting to do another record with vocals. "Black Heaven was outside our comfort zone. I think it was a good record, but it was challenging to write songs in a more traditional verse-chorus-verse format. This one was more enjoyable."

All told, Night Parade Of One Hundred Demons isn't just a return to the band's traditional format-it's a return to their very beginnings. "This album actually has the very first Earthless riff in it," Eginton reveals. "We just recorded it 20 years after we wrote it. But we're really happy with how this record came out. We feel it might be our finest to date."