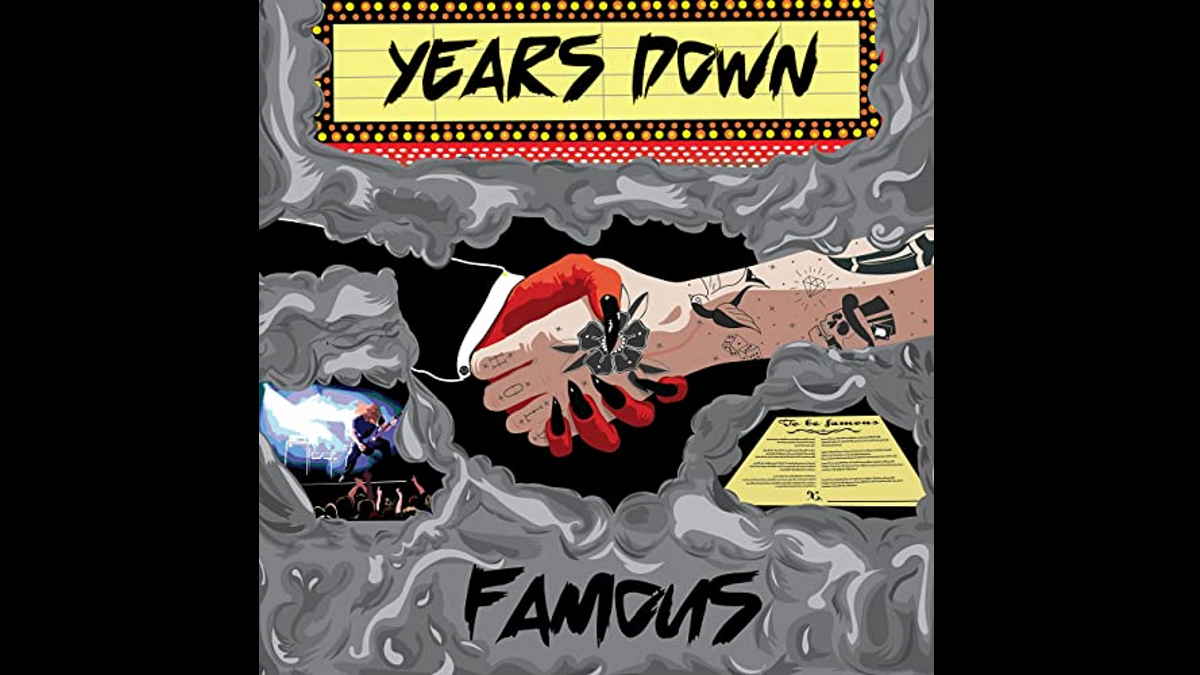 Denver-based pop-punk rockers Years Down just released a new single called "Famous" and to celebrate we asked Griffin and Ben to tell us about the track. Here is the story:

Griffin: In order to have the answer to this question make any sense you need a little pretext, that being, Years Down is a very collaborative effort creatively, Ben and myself frequently work on lyrics as a team, often pulling from both of our pasts and previously written material that just didn't have a home yet. In this particular instance, Ben already had a decent majority of the song composed before our meeting and me joining the band, he had these phenomenal riffs and chord progressions tethered to some pretty scathing lyrics, the bones were all there and ready to be assembled it just needed some finishing touches. So I made some edits and reworded portions of the chorus, chopped up the melody he had in a few places to fit my style and ability a little better, and took over writing the lyrics and melody for the last half of the song. Interestingly enough, Years Down is actually my first band and "famous" was also the first song we wrote together, to say I was self-conscious when coming up with what I added would be an understatement. Although if we are being honest the words came somewhat easy after a little effort and the whole process proved to be genuinely cathartic. When it came time to finally record the song the process was certainly challenging but also pretty fun too. Taylor Hahn (our go-to guy) is a superstar producer, he's been around the local scene for a good while and has worked with just about everybody in our genre in town. The guy has got these crazy positive vibes, he just exudes this coach energy, like, he's going to push you to give it everything you have, really expect the world from you, but its all in service to making the song as good as it can possibly be and because of who/how he is you want to lay it all on the table for him.

Griffin: As mentioned before a lot of our writing process is extremely collaborative so I can only speak to the meaning I was able to glean out of Ben's words and, of course, the meaning behind the lyrics I added. When I first read what Ben wrote I immediately saw the potential for the song to have this sort of narrative arc that plays out as a conversation between two people, so much of what he had already composed had this super conversational feel about it, almost as if several lines such as, "and you can't even see me when I'm staring in your eye", were ripped from very real arguments he had. So I took that structure Ben laid and expanded on it, drawing on my own personal experience of being in a relationship with an unsupportive partner, and how their words/actions caused me to question myself and my dreams. Prior to joining Years Down I had basically hit the self destruct button on the life I had been building, I left all my friends and the town I had been living in for ages, ended a serious relationship of several years that just wasn't working, and moved to completely new place halfway across the US to start over and pursue my dreams of being in music. It's abundantly clear in the lyrics I contributed that I was burning bridges and all too happy to be doing it for example I came up with the line in the chorus "if you don't like that you can forget my name then" as a sort of call out to the people who weren't supportive of me. Other bits I added have the same sort of vibe like "cut all my ties from that old dead-end town" or "don't call, don't text, don't even speak my name" and helped round the song's conversational narrative out with a conclusion. While some of what I wrote may have the appearance of confidence I also injected some elements of the self-doubt and depression, that had been built up in me over the past few years with lines like "I don't know, I don't think, I can do this anymore, So take my body and this bottle and retire to the floor".

Ben: I actually first got inspiration from the movie "Oh Brother, Where Art Thou" which references the Robert Johnson story of how he sold his soul to the Devil in exchange for musical talent. So basically when I first started writing this song all I wanted to do was make money and get famous, however now I realize it has a much deeper meaning and that's what I love about music, and the music Years Down makes. At first, it can mean something simple and base, but then it transforms into more that you never knew was there until you really think about it. Keep it simple or dive deep. That's what music's all about.

At the end of the day, I think this is one of those songs that the listener is going to relate to it in their own way. Whether it be a relationship where you don't feel supported, or a career where you just want to move up the ladder and get to that next level. It's also a little negative to though because selling your soul is pretty much the easy way out to attain those things. But nobody's perfect.