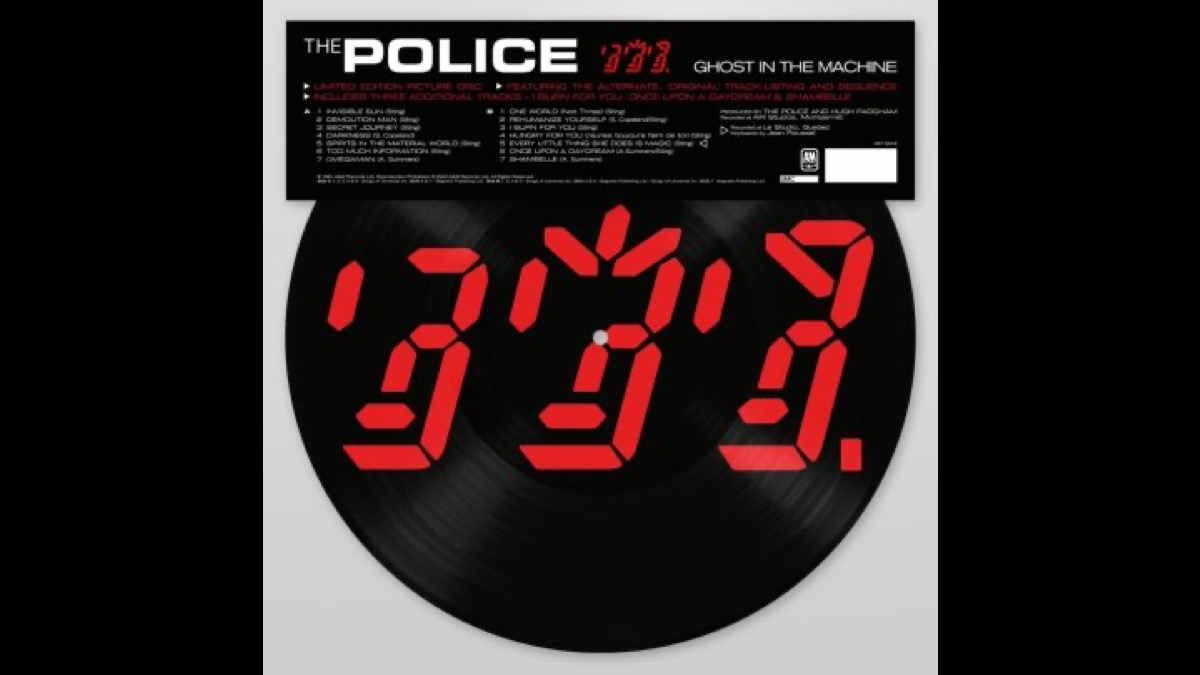 Photo of the picture disc and packaging

(FunHouse Ent) Ghost In The Machine, The Police's fourth album which was first released in 1981, is to be reissued as a stunning limited edition picture disc, featuring the alternate, 'original' track-listing and sequencing.

To be released on November 4 and now available on pre-order, this special reissue features three additional tracks not included on the original album - "I Burn For You" - the single mix of the track from the "Brimstone and Treacle" album - "Once Upon A Daydream" and "Shambelle."

To add to the unique nature of this release, and reflecting the personality of the band, four songs ("Spirits In The Material World," "Rehumanize Yourself," "One World (Not Three)" and "Hungry For You") feature Stewart Copeland counting in the tracks - distinctive audio from the recording studio that was not included on the 1981 release.

The discs' side A design features the logo image from the front sleeve and side B features the inner sleeve image. Recorded at AIR Studios, Montserrat and Le Studio, Quebec, Ghost In The Machine was No. 1 on the U.K. album chart, No. 2 on the Billboard 200, and a multi-platinum best seller all over the world in which the bands' jazz influences became more pronounced but still retained the sophisticated pop appeal for which the band had become known.

The original release featured three hit singles - "Every Little Thing She Does Is Magic," "Invisible Sun" and "Spirits in the Material World." Other highlights also include the rollicking "Demolition Man" (later covered by Grace Jones), the frantic "Rehumanize Yourself," and the ballads "Secret Journey" and "Darkness."

Side A:
Invisible Sun
Demolition Man
Secret Journey
Darkness
Spirits In The Material World
Too Much Information
Omegaman

Side B:
One World (Not Three)
Rehumanize Yourself
I Burn For You
Hungry For You (j'aurais toujours faim de toi)
Every Little Thing She Does Is Magic
Once Upon A Daydream
Shambelle