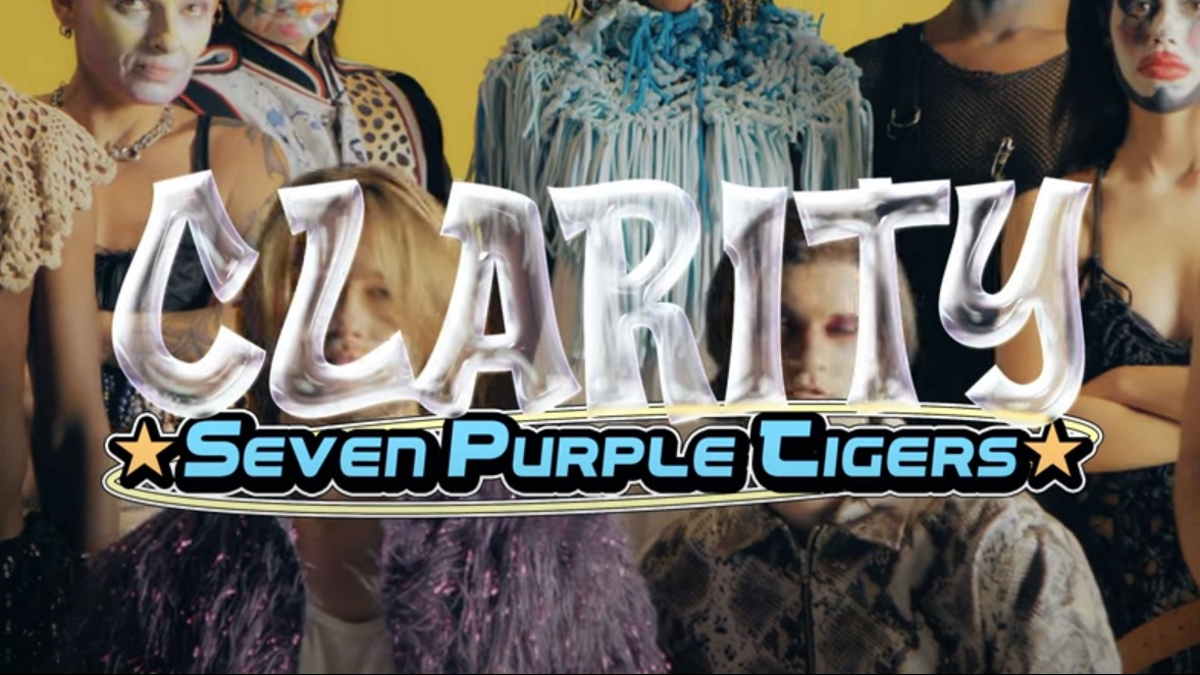 Still from the Clarity music video

American-German indie rockers Seven Purple Tigers just released their new single, "Clarity", and to celebrate we asked Austin Horn to tell us about the track, which comes from their forthcoming EP, "Daydream Echo Chamber" (out November 4th). Here is the story:

While "Clarity" will be the first single to be released for our upcoming EP, Daydream Echo Chamber, it was the last song to be added to the track list. It started as one of a plethora of projects and demoes we wrote during the height of the 2020 lockdowns, many of which became our 2021 single releases and the other songs on the EP, but one we had abandoned and left to collect dust in the hard drive for nearly two years. Having unearthed it in 2022, we immediately saw its potential and in a 15 hour studio session we created the demo that we knew had to be the lead single for Daydream Echo Chamber, and is to date (in our minds) the best piece of music we've yet released.

It is often the case in life that a person comes to realize certain truths about themselves, about who they are, and there is a requisite period of introspection that comes with it. As those truths, once lived out, might affect one's personal relationships, their career or the way the world or people they care about sees them, self acceptance can take time. When it is finally achieved, however, a massive weight is lifted of of one's shoulders, and there is, to quote Milan Kundera, and "unbearable lightness of being." There is also a feeling of "OK, but now what do I do with this?" - and the oft difficult business of living it fully. That revelation, euphoria, and strange melancholy following such a long period of self-discovery is the basis for "Clarity." The both of us (myself and Phil) had both experienced such a time in the past few years, albeit in completely different ways, and when the question came up when writing "Clarity" as to what we were going to write about, Phil suggested a reflection on those experiences as if reading my mind; I had been thinking the exact same thing. The song is for anyone who has gone through such a process of self-discovery and all of the joys and pitfalls it may come with, regardless of what that exact experience might have been.

Musically, the song began as a bass and guitar riff Phil wrote and for which he had asked me to play some keys and program a drum beat. At the time, I personally wasn't feeling terribly inspired by it, be it either through fatigue or just "having one of those days," so after playing my parts in we sort of just saved the project and let it be. It sat in our files under the rather unhelpful title of "Nice Chords" until 2022, when a new industry contact who'd reached out to us asked for some demos, and we were scouring our computer for something to send (incidentally this is also how we rediscovered "These Days," which will also appear on the EP). This time, upon playing the little loop we were instantly inspired to make it a song and got to work coming up with vocal melodies. It was then that Phil suggested the vocal riff that bookends the song. Excited and recognizing the track's potential, we returned to finish it in that 15 hour session so that it could be submitted to the director of our upcoming music videos, Brandon Bernath. The music is upbeat and danceable to convey the joys of self-acceptance, but retains a tinge of melancholy to attest to the work done to achieve it, and the often difficult journey that still lies ahead.

The music video, shot in Los Angeles, is a colorful soiree that matches the music perfectly. It features performances from a massively talented, diverse cast, clad in the magnificent creations of a true LA legend, Gary Allen, and painted in all manner of vibrant makeup styles. Working with Brandon and everyone on set was an amazing experience, and we can't wait for the world to see the piece of moving art that came out of it!