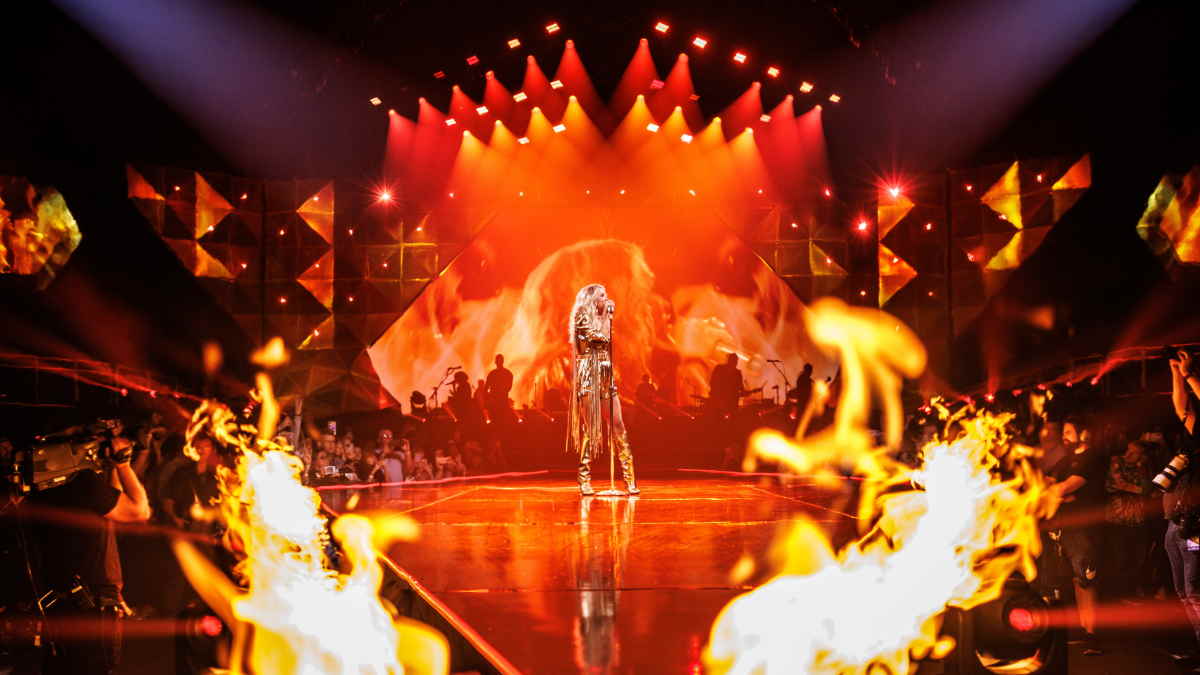 Live Nation sent over these details: With dates in Fall 2022 and Spring 2023, promoted by AEG Presents, the tour will make stops in 43 U.S. cities including New York's Madison Square Garden, Nashville's Bridgestone Arena, and L.A.'s Crypto.com Arena before concluding in Seattle, WA on March 17. Underwood is joined on THE DENIM & RHINESTONES TOUR by special guest Jimmie Allen on all dates.

In addition to many of the popular hits spanning her stellar 17-year career, Underwood's nearly two-hour set featured songs from her new album, Denim & Rhinestones, which she co-produced with David Garcia, including lead single "Ghost Story" - where she traveled from the arena's main stage on a florally adorned swing reminiscent of the one featured in the song's cinematic music video - and "Hate My Heart," which Underwood recently announced as her next single.

She also performed other fan favorites including "She Don't Know" and "Crazy Angels," the latter of which again brought Underwood high above the crowds, delivering gravity-defying vocals while performing aerial acrobatics within a suspended sphere-shaped apparatus. The packed arena went wild when Underwood brought Allen onstage to join her for a duet - and a bit of dancing - on the album's title track, "Denim & Rhinestones."

Other highlights of the show showcased Underwood's renowned vocal range, creativity, dazzling wardrobe, and pure showmanship, as she seamlessly transitioned between cinematic storytelling, resolutely faithful performances, and high-powered rockstar delivery she is known for. Underwood was, quite literally, brought to new heights with impressive lifts and aerial stunts throughout the night, in addition to pyrotechnics that punctuated songs with flare and new live spins on her classic hits.

Her cover of Guns N' Roses' "Welcome to the Jungle" electrified the crowd, just months after she welcomed Axl Rose as a surprise guest during her headlining set at Stagecoach in May, followed by her surprise performance during the band's UK shows at Tottenham Hotspur Stadium in London in July.

Underwood was joined onstage by her 8-piece band. THE DENIM & RHINESTONES TOUR is directed by Barry Lather and Nick Whitehouse/Fireplay is the Production Designer.

$1 from each ticket sold for THE DENIM & RHINESTONES TOUR will be contributed to the Tunnel to Towers Foundation (t2t.org), which has been helping America's heroes since 9/11 by providing mortgage-free homes to Gold Star and fallen first responder families with young children and by building custom-designed smart homes for catastrophically injured veterans and first responders.