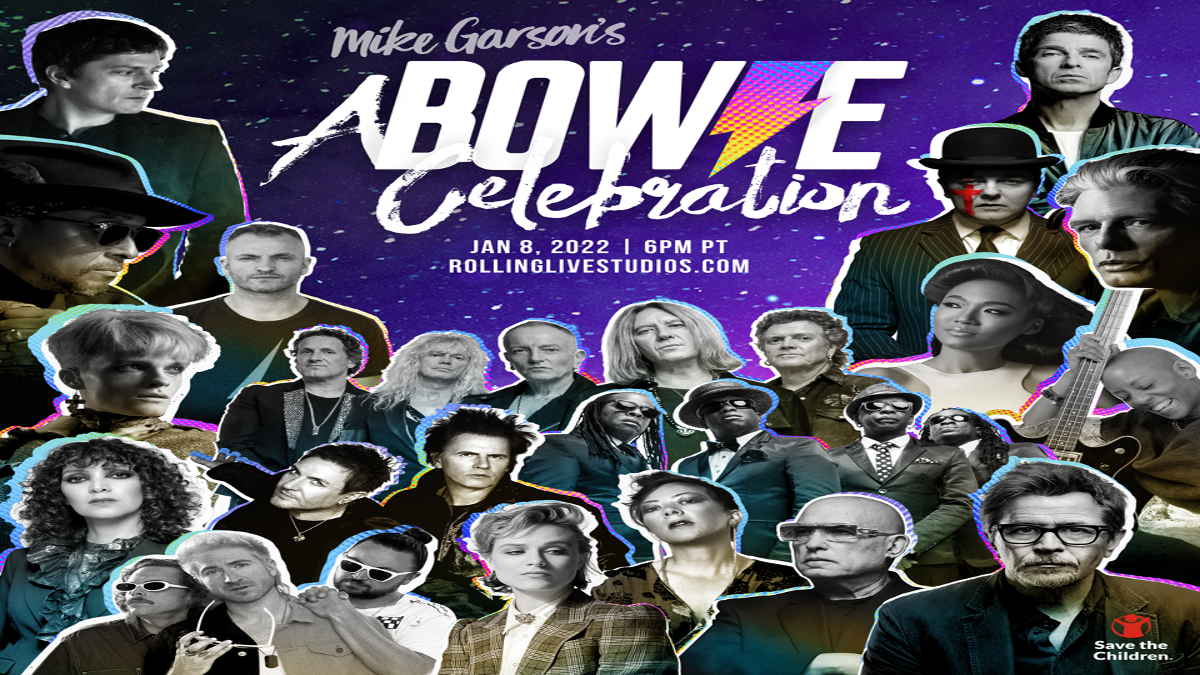 (Big Hassle Media) Access to the A Bowie Celebration livestream has been extended through Sunday, January 16th. The concert, with direction by Kerry Brown and musical direction by Mike Garson, took place on what would have been David Bowie's 75th birthday and features Def Leppard, Duran Duran's Simon Le Bon and John Taylor, William Corgan, Rob Thomas, Noel Gallagher, Living Colour, Evan Rachel Wood, Gary Oldman, WALK THE MOON and Jake Wesley Rogers among other special guests, including an appearance by Ricky Gervais. The event is available on RollingLiveStudios.com to enjoy worldwide through Sunday, January 16.

Highlights from this year's concert include the first performance by Def Leppard in two years as they perform Bowie's hit single "Drive-In Saturday." Duran Duran's Simon Le Bon and John Taylor perform an energetic"Let's Dance" featuring many of the Bowie alumni musicians who recorded that mega-hit song with Bowie.

WALK THE MOON rocks three Bowie classics including "Fame," "Golden Years" and "Under Pressure," while Grammy Award winner Judith Hill soars to new heights with her take on "It Ain't Easy" and her jaw-dropping duet of "Wild is the Wind" with The Rolling Stone's Bernard Fowler who also expertly sings the Bowie classic "The Jean Genie." The show features a stunning turn by Bowie alumni Gail Ann Dorsey who sings "Shadow Man" from Bowie's just released Toy album, along with a gorgeous rendition of "Valentine's Day" by Noel Gallagher.

Academy Award winning actor and friend of Bowie, Gary Oldman sings an emotional "Slip Away" while Living Colour offers a powerful "I'm Afraid of Americans" and a thrilling version of Bowie's hit "Young American's" with the song's original legendary saxophone player David Sanborn. Up and coming singer/songwriter Jake Wesley Rogers commands the stage with show-stopping takes of "Modern Love" and "Life on Mars?" along with Matchbox Twenty's Rob Thomas who performs "Changes" and a soaring "Heroes" encore.

This year's show also honors the 35th anniversary of Labyrinth, the classic fantasy film and Jim Henson/David Bowie collaboration, with a special performance from actress Evan Rachel Wood and a beloved character from the film created by Jim Henson's Creature Shop specifically for the event, along with an appearance by Brian Henson. The show is dedicated to frequent Bowie photographer Mick Rock.

Kerry Brown's Rolling Live Studios partnered with Mike Garson for this second A Bowie Celebration livestream concert with $2 per ticket purchase donated to the Save the Children organization, a charity important to Bowie and the beneficiary of funds raised from his 50th Birthday Concert held in 1997.

Tickets are on sale now at http://RollingLiveStudios.com/Bowie with VIP ticket bundles including various exclusive merchandise and opportunities such as access to a virtual Q&A with members of the Bowie alumni band and even a custom piano track from Garson himself.

Garson played on dozens of Bowie albums and performed in more concerts with Bowie than any other band member, including both Bowie's first and final performances in the United States.

Mike Garson says, "It's an honor to be able to continue to share David Bowie's music with the world. I'm excited for everyone to be able to experience this very special show we've got in store in celebration of what would have been David's 75th birthday with the bandmates he recorded and performed with, plus a great group of guest artists who he was such an influence to."

"It's an absolute thrill for me and the stellar team at Rolling Live Studios to be producing and directing A Bowie Celebration for the second year," said RLS Founder Kerry Brown. "Working with my dear friend and Bowie's piano man Mike Garson alongside the best musicians and artists in the world celebrating David Bowie's amazing career is a dream come true."