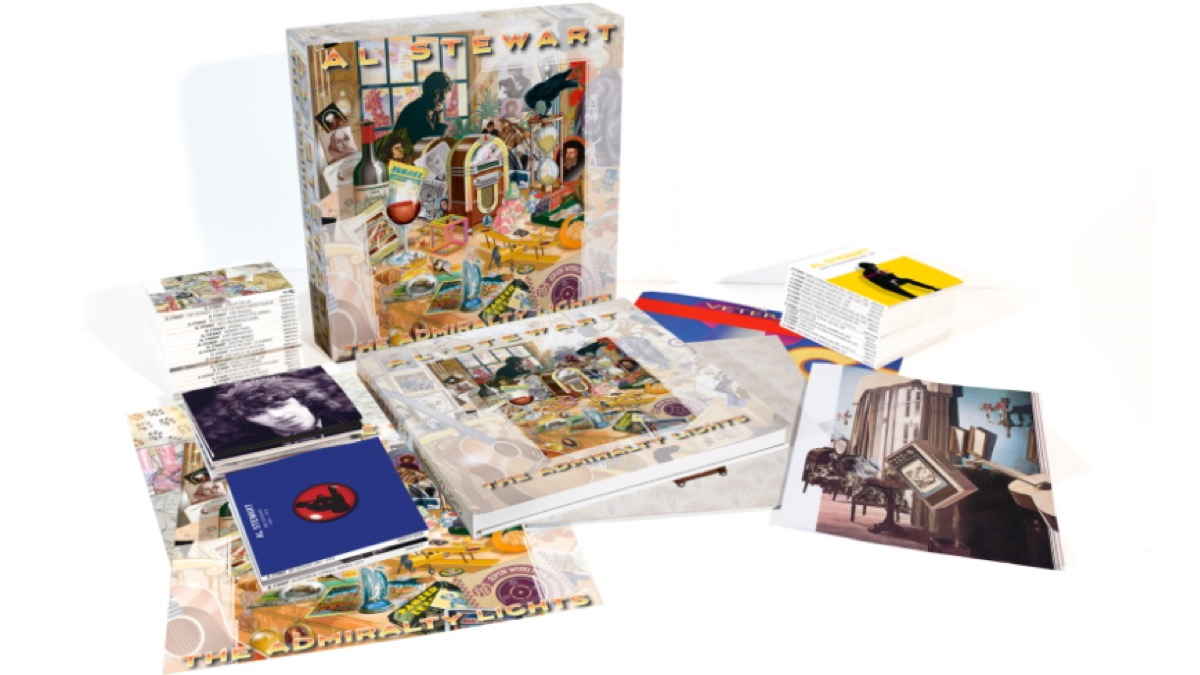 (Glass Onyon) Madfish have shared a trailer for the massive 50 disc Al Stewart box set, "The Admiralty Lights," which is set to be released on June 3rd. We were sent the following details:

Al Stewart's sixty-year career in music has made him one of the most successful folk-rock artists the British Isles have ever produced. "The Admiralty Lights" shines a light on how a Glasgow born Skiffle-mad kid conquered the world.

Lights is the new career spanning, definitive collection of Al Stewart's work. Comprising 50 discs, this astounding set follows the legendary singer-songwriter from humble beginnings in 1964, to global stardom in the '70s, through to his most recent recordings in 2009.

The new deluxe box set features Al's complete original run of 21 studio albums which have been remastered from the original tape transfers, housed in original sleeves and lovingly presented in deluxe LP style jackets. Also included are 18 discs featuring never-before-heard live concert recordings from 1970 to 2009, 3 discs of rare BBC Sessions from 1965 - 1972 and 8 discs of Demos, Outtakes and Rarities, offering a rare inside look into Mr Stewart's world.

Studio album pick-outs include the 1967 debut "Bedsitter Images" with its Dylan influences, the follow up "Love Chronicles" (1969) which saw Stewart backed by Fairport Convention alongside appearances from Led Zeppelin's Jimmy Page and John Paul Jones, and 1973's "Present & Future" featuring guest slots from Rick Wakeman and Queen's Roger Taylor. Then came the celebrated Alan Parsons years, commencing with "Modern Times" (1975) which in turn sowed the seeds for its magnificent follow up, the perennial classic "Year of the Cat" (1976) before concluding with 1978's "Time Passages." Another inclusion in the pantheon of distinguished Al Stewart studio albums is the highly acclaimed 2005 release "A Beach Full Of Shells," a wonderful listening experience featuring 13 songs full of the dream-like, poetic lyrical wordplay that has become the singer-songwriter's hallmark.

The collection also includes over 300 previously unheard tracks recorded from 1964, showcasing a young Al as he made his start, through to 2008.

A beautiful 160-page hardback coffee table book is at the center of this spectacular package, featuring comprehensive liner notes from author and Al Stewart expert Neville Judd and previously unseen photographs, flyers and ephemera from across his illustrious career. Vigilant fans will recognize the masterful touch of Colin Elgie, who has provided a visually striking original illustration for the outer box cover, having previously collaborated with Al on his "Year of the Cat" album.

Rounding off this smorgasbord of Al Stewart delights is a "Year of the Cat" print, individually signed by Colin Elgie, three posters and a 24 page Collectors' Book, detailing all of the rare recordings in the set. Preorder the set here (ad). See the content breakdown and stream the trailer below: