Behind The Album: Yony's More Truth In Fiction 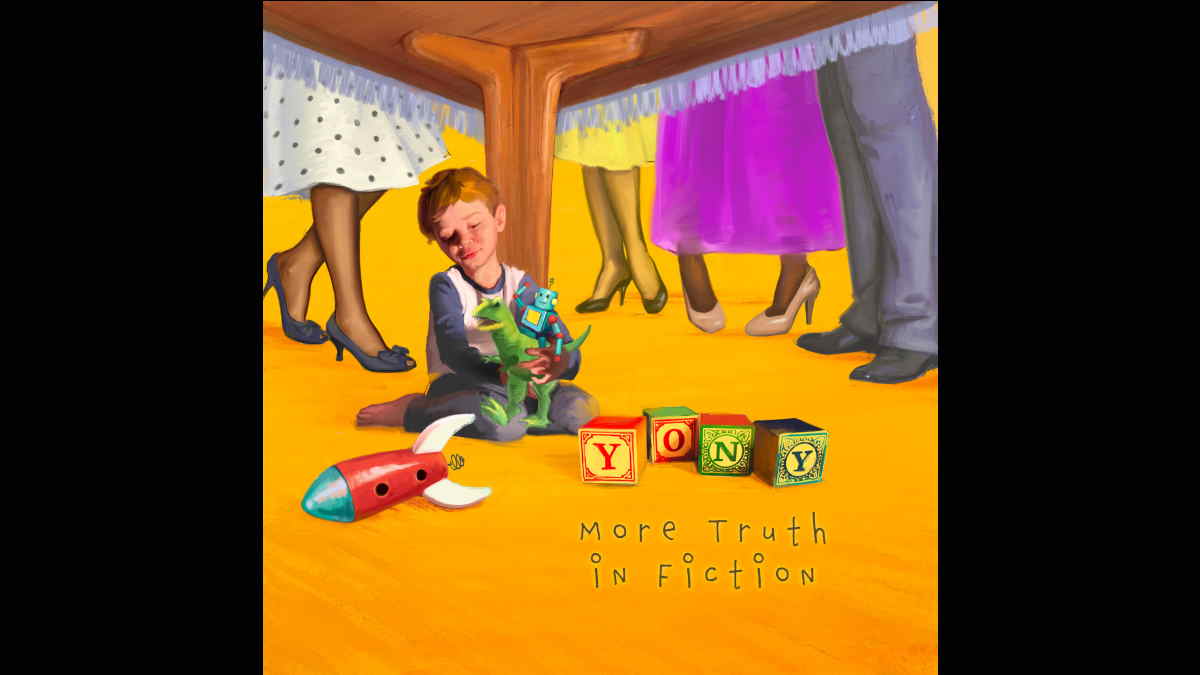 LA-based indie rockers Yony, spearheaded by Mike Cionni, just released their new album, "More Truth In Fiction", and to celebrate we asked Mike to tell us about the effort.

More Truth in Fiction came to mean a lot of things by the time we finished the album, but at first the vision was clear-ish. Non-fiction tells factual stories of actual people and events-some of which have been witnessed on a massive scale- from the perspective of a single person, or publisher. The older the story, the further removed. Fiction does the exact opposite, taking one person's imagination and broadcasting it to the world. There is no event, just an idea for the reader to experience in their own way. That experience is authentic.

The phrase got caught in my head, and before I had any songs written, that was what it was going to be. Sort of like right now, I keep coming back to "Catatonic Bliss." Will it be the title of our next album? Possibly.

This was about 3 months into the pandemic when people were starting to lose it. Everywhere there were protests, political arguments, health scares, deaths of friends and family. And on top of that, nobody knew who was telling us the f***ing truth. Doctors were lying, politicians, even my friends and family said some really wild stuff. That's when it got scary, because now people didn't even know they were spreading lies. The line was blurred.

The title track "More Truth in Fiction" took aim at the Misinformation Age, and opened me up to the idea that maybe the album could be more of a time capsule to air out all that anger and frustration. That being said, things got pretty personal. "The Only Naked Guy at the Party", "Waves of Exhaustion", and "If It Happened 2 U" are just a few of the tracks that allowed me to speak my mind. We talk about depression, introversion, gun control, trans rights, greed, religion... it's a gnarly brew.

The recording process was a little like a Covid-America Microverse. We didn't meet in groups larger than 3, wore masks, fist-bumped with our elbows. The bulk of prep took place in our NoHo rehearsal space, with Alex Zudin, Dustin Hackworth, and I shedding the songs on drums, keys, and guitar. Once the structure felt complete, Dustin and I met Will Golden at Sir Tiger Studio to track drums. I took the tracks home and laid down vocals, guitar, and some other scratch elements.

Once these "demo" versions were in place, I met with each member one-on-one to fine-tune parts and track the final pieces! Meg Cionni and Michelle Maret came in together to track their vocals, and I actually had to coordinate with Jim Berkenkamp, our bassist, over email and FaceTime since he was in Flagstaff for four months. All this to say, it was not your typical recording process.

Half of the tracks were sent to Norbert Lukacs, and half were sent to Jules de Gasperis. Norbert's style is lush and romantic while Jules is more heavy and lo-fi, but when the tracks came back they fit together like peanut butter and jelly. Or more like Jekyll and Hyde.

Finally, we had the tracks mastered by Evren Goknar in his home studio. Once again, we did things over email to keep things socially distant. But I have a lot of trust in Evren's work. We worked together on Rusty Tinder's Alchemy Road the year before and he absolutely nailed it.

Since then, we've been getting ready for a live performance. We hit a speed bump when Dustin left the band early this year, but our friend Evan Bernardin is stepping in and has done a terrific job getting to know our catalogue.

Hearing is believing. Now that you know the story behind the album, stream the full album here

Related Stories
Behind The Album: Yony's More Truth In Fiction