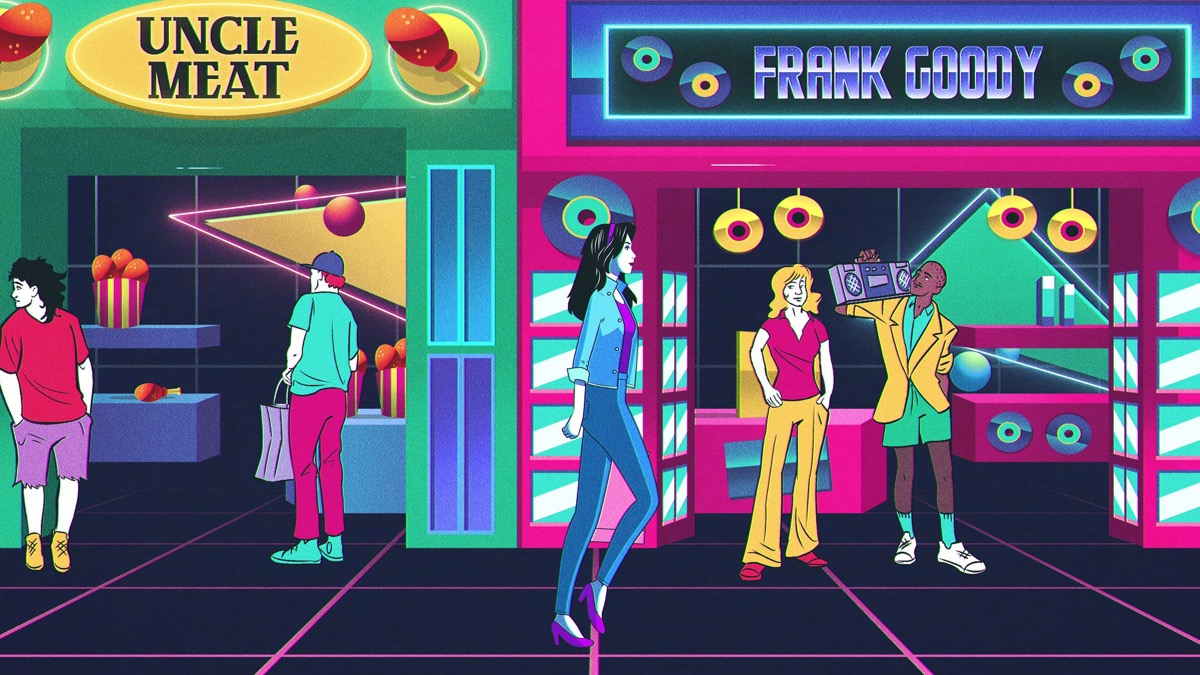 Still from the new animated video

(UMe) This year marks the 40th anniversary of "Valley Girl," Frank Zappa's sardonic, GRAMMY-nominated Top 40 hit co-written with and featuring his then teenage daughter Moon Unit Zappa offering up the "totally bitchin'" local slang of the day over a gonzo riff set to an energetic beat.

Released in 1982, the satirical track - which poked fun at the teen culture of Southern California's San Fernando Valley - became the innovative artist's biggest hit in the U.S. and inadvertently popularized "Valspeak" across the nation while capturing the zeitgeist of the day.

To accompany the video, a new collection of "Valley Girl"-inspired merch, featuring graphics and imagery from the video on a t-shirt, tank and hat, is now available, alongside the recently released evergreen Zappa line at Zappa.com.

Later this year, "Valley Girl" will also receive a fresh remix from British DJ, producer, and EDM star, and longtime Zappa fan, Flux Pavillion, who has previously worked alongside M.I.A., Dillon Francis, Marshmello, Steve Aoki, and many others.

When 14-year-old Moon first approached Frank Zappa about a collaboration, her only goal was to spend more time with her legendary father. For the better part of three decades, the elder Zappa had gained near-mythic status through his work as a boundary-pushing musician, a prolific composer and producer, a guitar virtuoso, and a prominent activist. By the early '80s, however, Zappa was a family man, who spent much of his time at his home studio when he wasn't touring. His children - Moon, Dweezil, Ahmet, and Diva - meanwhile, had few rules, other than to not disturb their father when he was at work.

Craving a sense of normalcy and quality time with her dad, Moon slipped a note under Frank's studio door. "Up until now I have been trying to stay out of your way while you record. However, I have come to the conclusion that I would love to sing on your album," it read. In early 1982, not long before he embarked on a European tour, Frank took his daughter up on her offer, waking her up at 3 AM to record vocals over a 4/4 beat and guitar riff that he and drummer Chad Wackerman had laid down (both of which were remarkably conventional for the offbeat artist). The teen gave it her all, improvising her best "Encino accent" and impersonating the inane idioms of her Los Angeles peers. Adding additional instrumentation from bassist Scott Thunes, plus a sardonically catchy chorus, Frank Zappa unwittingly created an anthem for the early '80s.

Initially, the acetate was shared exclusively with local rock station KROQ-FM, where Moon gave an interview, introducing the track. The song was an instant hit and soon rival stations were playing bootlegged recordings of it. It would be months, however, until "Valley Girl" was officially released-first as a track on Frank's album, Ship Arriving Too Late to Save a Drowning Witch, which dropped in May-and later as a 7-inch single, which arrived in stores on August 30.

By September, "Valley Girl" had become a cultural phenomenon, reaching No. 32 on the Billboard Hot 100, No. 12 on the Top Tracks chart (now known as the Mainstream Rock chart), and No. 18 on the Canadian pop chart. The song, which marked Zappa's sole U.S. Top 40 hit, drove Ship Arriving Too Late to Save a Drowning Witch up the album charts, where it peaked at No. 23. The following year, "Valley Girl" earned the Zappas a GRAMMY® nod for Best Rock Performance by a Duo or Group with Vocal. Despite the ironic nature of "Valley Girl," the single spawned a variety of themed merchandise, including posters, dolls, cosmetics, and clothing, and inspired teens around the globe to embrace phrases like "totally bitchin'," "gag me with a spoon," and "barf me out!"

Frank wasn't thrilled with the public's response to the song, telling Billboard, "People think 'Valley Girl' is a happy kind of song, but it isn't. I've always hated the Valley. It's a most depressing place.... It just goes to show that the American public loves to celebrate the infantile."

Moon, on the other hand, loved making her dad laugh, collaborating artistically and spending rare one-on-one time with him, even if it meant being uncomfortably thrust into the global spotlight so young. Moon looks forward to the new ways people will connect with the iconic character she created that the world continues to love.