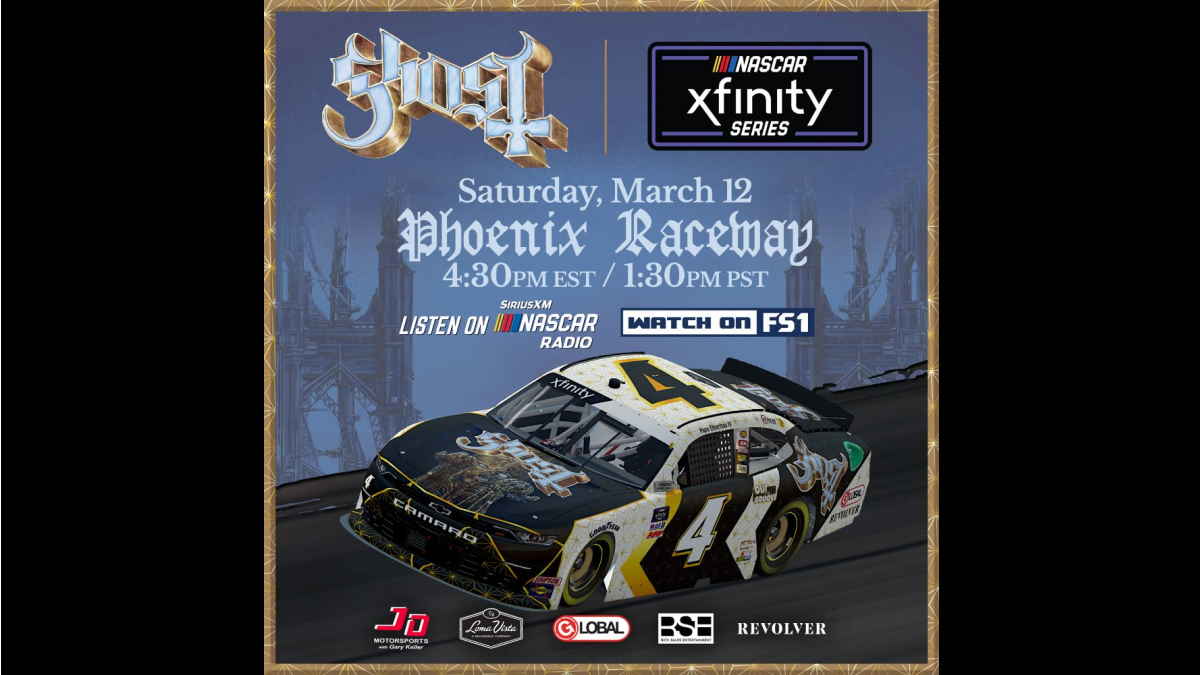 (Nasty Little Man) Ghost have announced that they have launched a new partnership with NASCAR Xfinity Series team JD Motorsports and driver Bayley Currey and the acclaimed band will be the primary sponsor for Currey's No. 4 Chevrolet - a/k/a the "Papa 4 car" - to be unveiled at the United Rentals 200 at Phoenix Raceway on Saturday, March 12-exactly one day after the release of the band's new album, Impera.

This unique partnership marks the band's first foray into American motorsports. "I'm a musician myself," says JD Motorsports VP of Sales & Marketing Tony Priscaro, "So it's rocked working with Ghost and Loma Vista Recordings on this car. We can't wait to put the pedal to the metal.'"

The design of the No. 4 Chevrolet tells the story of how this unprecedented partnership came together. The paint scheme features the band's logo, along with their partners Loma Vista Recordings, Global Merchandising Services, Revolver Magazine and Rick Sales Entertainment (RSE).

The partnership is managed by marketing and content creation agency A.E. Engine with promotional support provided by Out of the Groove, and its host Eric Estepp. The Out of the Groove logo will also be featured on the No. 4 Chevrolet.

"Me and Craig (Baroncelli) at A.E. Engine are both huge fans of Ghost," says Eric Estepp. "Fans know I love the band and wear Ghost shirts on my show regularly. I'm constantly getting comments on my channel or people coming up to me at the races talking about how much they love the band, too. So we knew this would be really exciting for the fans."

"At A.E. Engine, we're focused on bringing new partners and audiences to the sport," says Craig Baroncelli, CEO and Publisher. "Eric actually introduced me to Ghost. We were texting back and forth about the new Ghost song and video - 'Call Me Little Sunshine' - when it was released in January and we quickly realized the new album - IMPERA - will be released one day prior to the Xfinity Series race at Phoenix Raceway. At that point it was a no-brainer - we had to pursue this opportunity. I am just thankful Ghost and Loma Vista Recordings were so inspired by the idea. They are the ones that brought this car to life".

The 25-year-old driver Currey is in his first full-time year with JD Motorsports, but he's no stranger to Phoenix Raceway, including having made a Cup Series start there in 2019, as well as in the Xfinity series in more recent years. Currey finished seventh in last March's LS Track 250 Xfinity Series race at Phoenix Raceway.