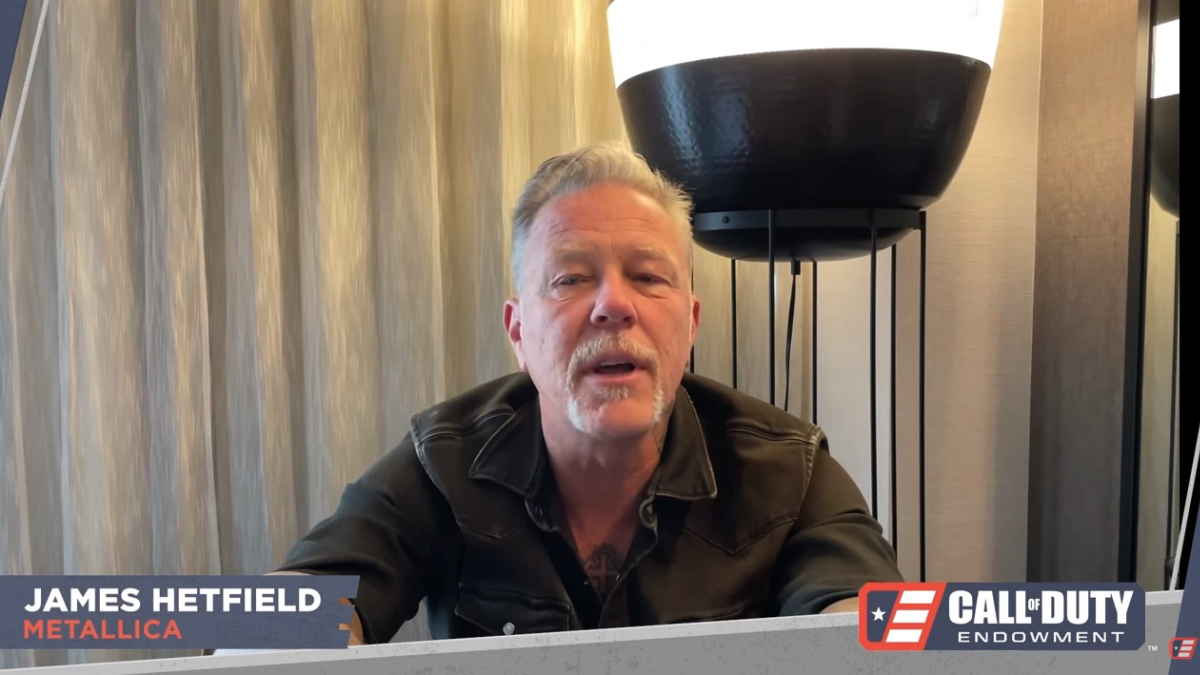 (Fresh Tracks) Metallica frontman James Hetfield is featured in a new video celebrating the news that The Call of Duty Endowment has reached its goal of placing 100,000 veterans into meaningful employment two years ahead of schedule.

In addition, Activision Blizzard is also committing $30 million in additional funding to support the program for the next five years. To coincide with today's announcement, and in recognition of Military Appreciation Month, the Endowment released a white paper detailing veteran employment "lessons learned" over the organization's 12-year history, with recommendations for veterans, employers, policy makers and philanthropic donors.

Over the last twelve years, the Call of Duty Endowment has helped more than 100,000 veterans find meaningful careers after their military service. The Endowment partners with the most effective nonprofit veterans organizations in both the US and UK to deliver low cost, high value job placement, the service most requested by veterans.

"To put 100,000 placements in perspective, the entire active-duty Marine Corps is made up of more than 178,000 people," said General James Jones, USMC (retired), 32nd Commandant of the United States Marine Corps and Co-Chair of the Call of Duty Endowment. "While reaching 100,000 placements two years earlier than our goal is an accomplishment to be proud of, there is much, much more we can and should be doing to support our veteran community as they transition to civilian employment."

"As we begin Military Appreciation Month we are proud of the accomplishments achieved by the Call of Duty Endowment and Dan Goldenberg's leadership. We also recognize that our heroes need even more post service employment support and opportunity than is currently provided. To date, we have invested over $60 million in support of veterans employment initiatives to secure 100,000 job placements," said Bobby Kotick, Co-Founder of the Call of Duty Endowment. "Today, we are committing an additional $30 million of funding for new veteran employment initiatives. With our even more efficient programs we expect to generate another 50,000 job placements through Call of Duty Endowment grants."

"As we recover from the pandemic, there are great opportunities but even greater challenges present in the labor market. Veterans need assistance more than ever," said Dan Goldenberg, Executive Director of the Call of Duty Endowment and Vice President of Corporate Social Responsibility at Activision Blizzard. "We are pleased to make a difference in getting veterans placed into meaningful employment, but also realize that we have so much more to do."

"The Call of Duty Endowment's financial and moral support has not only been essential for VetJobs' mission, having funded more than 48,000 of our 77,000 placements, but also in driving accountability to higher standards across not-for-profit veteran employment initiatives," said Rear Admiral Dan Kloeppel, U.S. Navy (retired), CEO of VetJobs. "There is no better, more supportive resource for veteran job placement than the Call of Duty Endowment." Watch the video below: