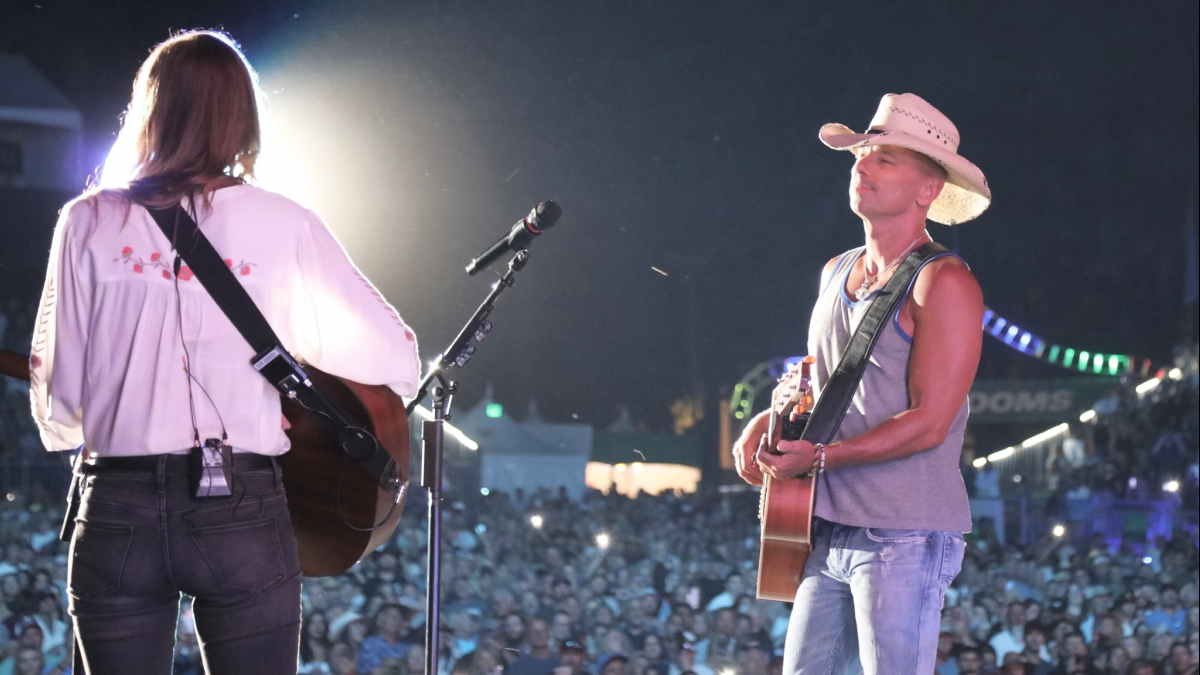 (EBM) Kenny Chesney was joined on stage by Kat Higgins for a performance of "Knowing You" at the Lake Tahoe stop of his Here And Now 2022 Tour. We were sent the following details:

Kenny Chesney understands the power of a song, a sentiment, even a dream. When he chose "Knowing You," the classic country waltz about honoring someone special who's gone, he knew it wasn't what radio was really playing, but he also recognized the impact songs that capture the essence of a best friend, family member, lover or mentor can mean.

Not only was it Chesney's 34th No. 1 - extending his run of the most No. 1s on the Billboard Country Songs - but it provided a great number of people with a song that brought back the best of what a relationship no longer was with a smile. Written by Adam James, Nashville Songwriters Hall of Famer Brett James (no relation) and Kat Higgins, it charmed people with its warmth and hope for the one gone wherever they might be.

"People forget how rare - and hard to write - a great country song can be," Chesney says. "When I heard 'Knowing You,' I just smiled; both for what the song was musically and the idea there are people you love, who leave, and you still wish them well no matter where they might be."

For Adam James and Kat Higgins, "Knowing You" was a special milestone. Each of the emerging songwriters scored their first No. 1 with the unconventional and wholly emotion-driven midtempo. For the Vancouver-born Higgins, who came to Nashville at 19 after Canadian artist success with her family, it's a song that reflects the yearning in much of her work as a solo artist.

Last week in Lake Tahoe, Chesney brought the dark-haired songstress out at Harvey's Lake Tahoe Outdoor Arena - and turned his stage over to her. With just an acoustic guitar and a whisper soft alto that sparkles, she delivered "Knowing You" and crushed No Shoes Nation with the stopping power of a simple song sung from the heart.

"It was an amazing thing to see," Chesney said, clearly delighted by the crowd response. "It's tough to walk out anywhere with just a guitar and put your heart out there, but Kat was so pure and just so true. She played that song we've all loved and believed in, and when she was done, she'd just destroyed the crowd."

A postcard from what was that sweetens where we are in ways both the singer and the listener could've never imagined, Higgins deepened Chesney's own interpretation. More than wistful, the young woman reminded the sold-out crowd to smile to the horizon for the one who's gone - whomever they are, wherever they are -- and embrace everything from the relationship that's no longer so you can cherish the wonder of what's left.

For the only country artist in Billboard's Top 10 Touring Acts of the Last 25 Years for the last dozen years, Higgins' surprise appearance was a rare jewel in a summer that brought No Shoes Nation together after more than three years since the pandemic. Not necessarily the intention, "Knowing You" in many ways could be a song to NSN during the time between tours.

"Country at its best is true, from the heart. 'Knowing You' is just that," Chesney says. "Especially hearing Kat sing it by herself. She made the essence of the song really shine with all the magic that was that other person - or for me, in a way, all of No Shoes Nation during the wait. Because even when we're not together, I know every single one of those people is out there making people feel more alive and enjoying everything about being alive."

Here And Now 2022 rolls into Los Angeles' SoFi Stadium next weekend on July 23. Brought to fans by Blue Chair Bay Rum and fueled by MARATHON, for the fans who've held their tickets over 1,000 days, it's a return to who they were before the world paused and a rite of summer was put on pause.