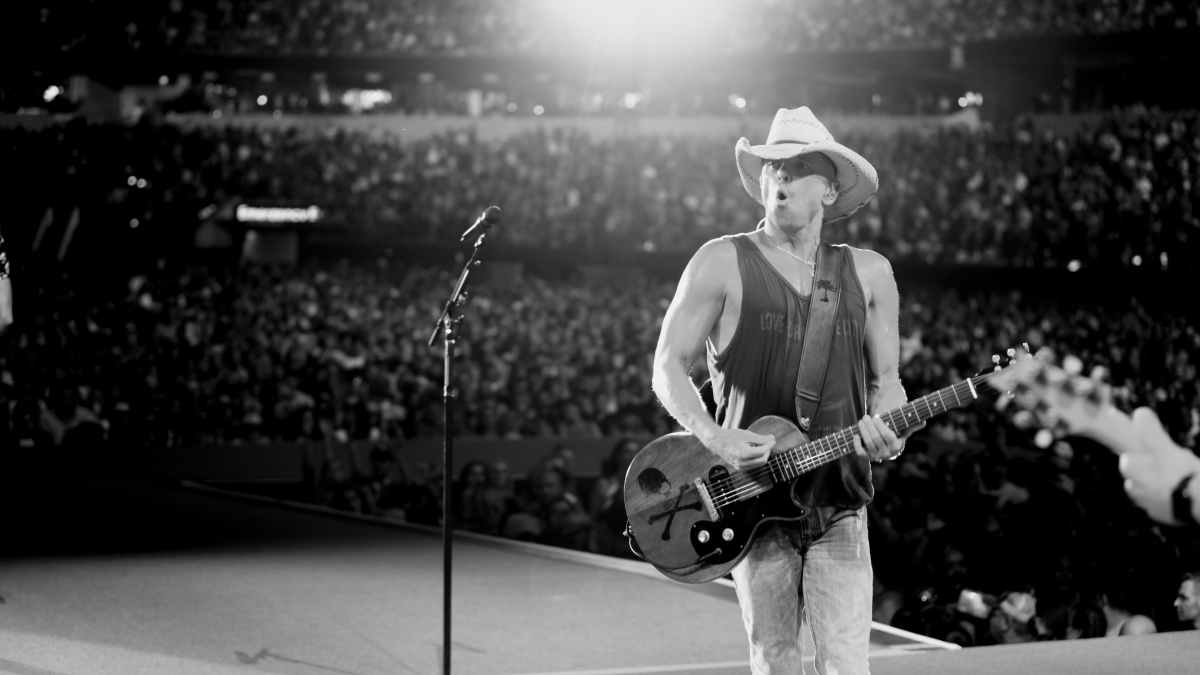 (EBM) After waiting for over 1000 days, Kenny Chesney finally performed at Los Angeles' new SoFi Stadium, playing to 50,227 fans during the stop of his Here and Now 2022 Tour. EBM shared these details:

Chesney stood onstage at SoFi Stadium soaked with sweat, beaming at the members of No Shoes Nation. Having done a press conference on the sixth level while the building was still under construction, this show had been a long time coming for the man The Wall Street Journal deemed "The King of the Road."

With multi-instrumentalist John Conley lashing away at his mandolin, "Pirate Flag" turned into an industrial strength sea shanty as 50,227 people loudly sang the praises of "a pirate flag and an island girl." Once again, the Nation without borders decamped in one of America's largest stadiums; and once again, the citizens gave everything over to the 25-song set that ran the gauntlet of the East Tennessean's career.

"Los Angeles is where so much great music has come from, and I had so many good friends in the audience," Chesney said after the show. "It sets a pretty high bar to get out there and clear, but you know, you hear that audience, and it just lifts you up and pushes you to places you didn't know you could get to."

On the surging "Somewhere With You," a song of post break-up desire, Chesney brought electric guitarist Kenny Greenburg down front for an extended solo that burned the songs ride out to cinders. The music as watermark of life's moments "I Go Back" had Southern California singing about coming of age, the smell of Sunday chicken after church and a young friend lost too soon. Even the feel good "When The Sun Goes Down" captured a sense of exuberance that has defined this year's record-making tour.

"No matter where we've been, it feels like people are really ready and wanting to feel good," Chesney offered. "The way they sing, the cheers, they've come to let go of all the heaviness in the world, to throw all of it into these songs - and I love that this music gives them the room to let go, to come together, to just have a night about how good life can be."

With a rousing final "She Thinks My Tractor's Sexy," with most of his tour staff, the No Shoes Radio team and a dog named Pilar onstage, Chesney posed with the assembled people to mark his SoFi debut. Some nights need to be documented, and this night was one of those.

"When I look back, I know this show is one I will want to remember. So many people are a part of it, so what better way to capture all the miles, the years and the friendships than take a picture onstage at a show we were looking forward to long before the stadium was even done.

"To think, I was here in a hard hat and vest with Louis Messina and Michael Franti for a press conference with all the men and women who built this place. And now we're finally getting to play. It doesn't get any better."

With Denver's Empower Field at Mile High next Saturday, July 30, Kenny Chesney's Here And Now Tour 2022 continues gathering momentum. Presented by Blue Chair Bay Rum and fueled by MARATHON, it's been a summer that's been one to remember - and it shows no signs of being anything less between now and its August 26-27 finish at Boston's Gillette Stadium.