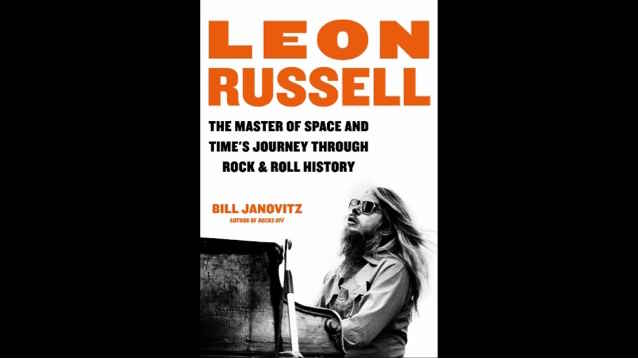 (Big Hassle Media) Hachette Books has announced the March 14 publication of Leon Russell: The Master Of Space And Time's Journey Through Rock & Roll History, a comprehensive new biography of the legendary musician, composer, and performer by acclaimed author and founding member of Buffalo Tom, Bill Janovitz.

Told with the support of Russell's estate, Leon Russell: The Master Of Space And Time's Journey Through Rock & Roll History stands tall as the definitive, never-before-told chronicle of one of the most important music makers of the 20th century, a genre-defying, multi-talented artist whose wildly diverse body of work has affirmed him as a one-of-a-kind Rock and Roll Hall of Famer and truly mythical figure in American music.

Leon Russell is an icon, but in many ways, he is also an underappreciated artist. A Zelig figure for a number of decades, he is spoken of in tones reserved not just for the most talented musicians, but also the most complex and fascinating. His career is like a roadmap of American music, though his mark can also be found in the work of British rock royalty like The Beatles, The Rolling Stones, and Elton John, the latter of whom later inducted him into the Rock and Roll Hall of Fame in 2011. The phenomenal litany of collaborators and beneficiaries of the creative worlds Russell created over the years spans such giants as Frank Sinatra, Bob Dylan, The Beach Boys, Phil Spector, George Harrison, Eric Clapton, Delaney and Bonnie, Willie Nelson, Rita Coolidge, Dave Mason, Freddie King, J.J. Cale, Bob Marley, Peter Tosh, Tom Petty and the Heartbreakers, Bonnie Raitt, and countless others. Inducted into the Songwriters' Hall of Fame in 2011, he is the composer of such oft-performed songs as "Delta Lady," "This Masquerade," and the GRAMMY® Hall of Fame classic, "A Song For You," scored his own hits with "Tight Rope" and "Lady Blue," filled stadiums on solo tours, and was an organizer/performer of both Joe Cocker's revolutionary "Mad Dogs and Englishmen" tour and George Harrison's Concert for Bangladesh.

A committed proponent of cultural diversity, Russell spent his 2x GRAMMY Award-winning career assembling wildly diverse bands and performances, laughing in the face of musical and social barriers. Sadly, Russell struggled with demons, including substance abuse, severe depression, and a crippling stage fright that wreaked havoc on his psyche over the long haul. Leon Russell: The Master Of Space And Time's Journey Through Rock & Roll History now tells this incredible story with the same passion, creativity, and scope that rang out throughout Russell's life and six-decade career, affirming him as a landmark artist whose impact can still be felt today throughout rock 'n' roll, Americana, and beyond. Preorder on Amazon.