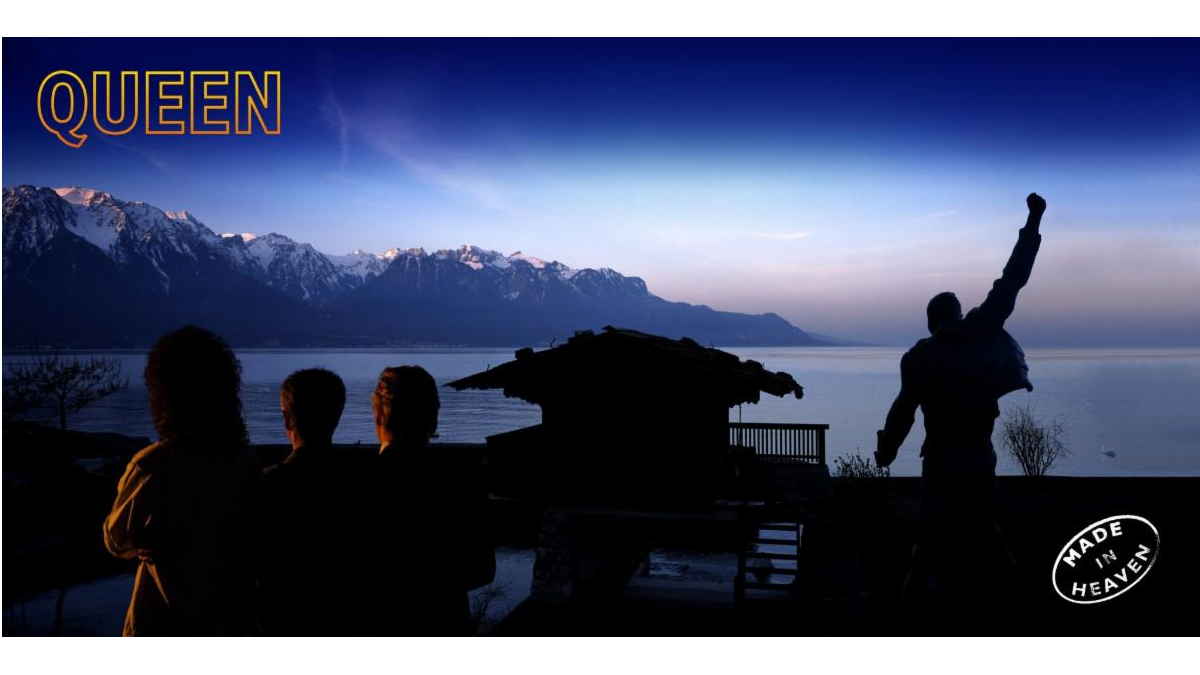 (Hollywood Records) The first episode of 2022 of Queen The Greatest video series heads back to November 1995 to look at Queen's fastest selling and most successful studio album to date - Made In Heaven.

While the Tribute Concert had been the perfect occasion for fans and the band to come together and celebrate the life, the works, and the dreams of one Freddie Mercury, for Brian, Roger and John there still remained some unfinished business.

In 1993, Brian May, Roger Taylor and John Deacon returned to Mountain Studios in Montreux, Switzerland, to work on finishing the tracks they had begun with Freddie Mercury during the early part of 1991.

The resulting album, Made In Heaven, was the final chapter in the band's legacy with Freddie, and featured polished versions of songs they had never managed to finish before as well as tracks for which Freddie had laid down vocals prior to his passing, such as "A Winter's Tale." Two tracks were revisited versions of songs Freddie originally recorded for his Mr. Bad Guy solo album. Another, "Heaven For Everyone," started life as a song by Roger's solo project The Cross, on which Freddie had sung a guest vocal - and Queen's reworked version became the first single from the Made In Heaven project.

Here Brian May talks about the process of healing that delayed the band's return to the studio - "I think I was reluctant to get back into opening those boxes and dealing with Freddie's voice there. And it was tough to begin with" - and acknowledges it was Roger who provided the impetus for the process to begin and mentions the support they received from, among others, songwriter Carole King.

Brian May: "Of course lurking in the wings was all the material we'd done with Freddie, which was unfinished, and what were we going to do with this? Would we manage to make an album with it?"

Roger Taylor: "Things like 'A Winter's Tale' really came out of that, that sort of desperately ill stage."

Roger Taylor: "They were made very much out of an awareness that Fred wasn't going to be around very long."

Brian May: "I think I kind of dragged my heels, I think I went through a very extended grieving process really, because I kind of didn't want to talk about Queen. I went out on my tour, solo tour, and of course, all that people wanted to talk about was Queen and Freddie's death and stuff, and I couldn't deal with it. I just said, 'Look, let's just talk about what's happening now.'"

Brian May: "So I had a bit of sort of denial stuff going on and I think I was reluctant to get back into opening those boxes and dealing with Freddie's voice there. And it was tough to begin with."

Brian May: "Roger made the first inroads and he took some of the tapes down to his studio and started working on them. And of course, that's the trigger I needed because I hear what he's done, and I go 'no, no, no, don't do it like that. You've got to do it like this,' you know? So my juices were working and I just dived in before I had time to think, and I took over some particular tracks. It was a monumental task."

Roger Taylor: "It was very weird working with Freddie's voice coming out of the speakers. But again, it was a very interesting process."

Roger Taylor: "Because we knew that the situation was closing in on us and... so we sort of made the most of every moment and then really enjoyed it."

Roger Taylor: "I think Brian and I certainly felt that we knew what Freddie would have been thinking. And, you know, we felt he was almost in the corner of the room and sort of knowing each other so well for so long, we sort of thought he'd like that bit but he probably wouldn't like that bit. And so we sort of got there and I was very pleased with the result."

Brian May: "I'm very fond of 'Mother Love,' and it has a little piece of 'I'm Going Back' at the end, which is one of the first things that Freddie ever sang in the studio. In fact, probably the first thing. A Carole King song.

"And I wrote to Carol King to ask her permission to use it, and she was delightful, she was so supportive, and she said she was thrilled that we would consider it important to put on there."

Brian May: "The whole album is a fantasy, really, because it sounds like the four of us are there all together having fun and making the album, but of course, for most of the time when you're listening, that's not the case. You know, it's built to sound that way. And a lot of love went into that."

Brian May: "There's tracks like 'I Was Born to Love You,' which of course was never a Queen track, that was a solo track which Freddie did very hurriedly, and he never kind of bothered about the backing tracks. So we stripped everything away and lovingly, cherishingly re-edited all his vocal, put it all together, and I spent months and months piecing together our bits to make it sound like we were in the studio together."

On it's release in November 1995, Made In Heaven raced to the top of the charts and achieved multiple Platinum status around the world - going on to sell in excess of 20 million copies. Five tracks were subsequently released as singles, all of which were top 20 hits in the UK.

Brian May: "I think it's one of our best albums, strangely, so good experiences all connected with that album, and I love the album I can put it on any time. And, obviously there were moments working on it when you're just listening to Freddie's voice 24 hours a day and that can be hard, you know, you suddenly think, 'Oh God, he's not here,' you know, 'why am I doing this?' But now, having been through that, I can listen to the album and it's just joy. I feel like it was the right completion, and it's the right album to finish up on."

To promote the album the band collaborated with the British Film Institute allowing emerging young directors and the BFI to decide how to represent their music. The result was eight very different short films which used songs from the album as their starting point and soundtrack, and could be shown the world over to promote the album.

Three of the films were selected to show on opening night of the 1996 Venice Film Festival alongside Robert de Niro's crime drama Sleepers. Meeting de Niro after the screening he asked the band: "Have you ever thought of creating a West End musical based on your music?"

That chance meeting opened up the doors to another extraordinary successful chapter in the Queen story, to be visited in a future episode of Queen The Greatest.