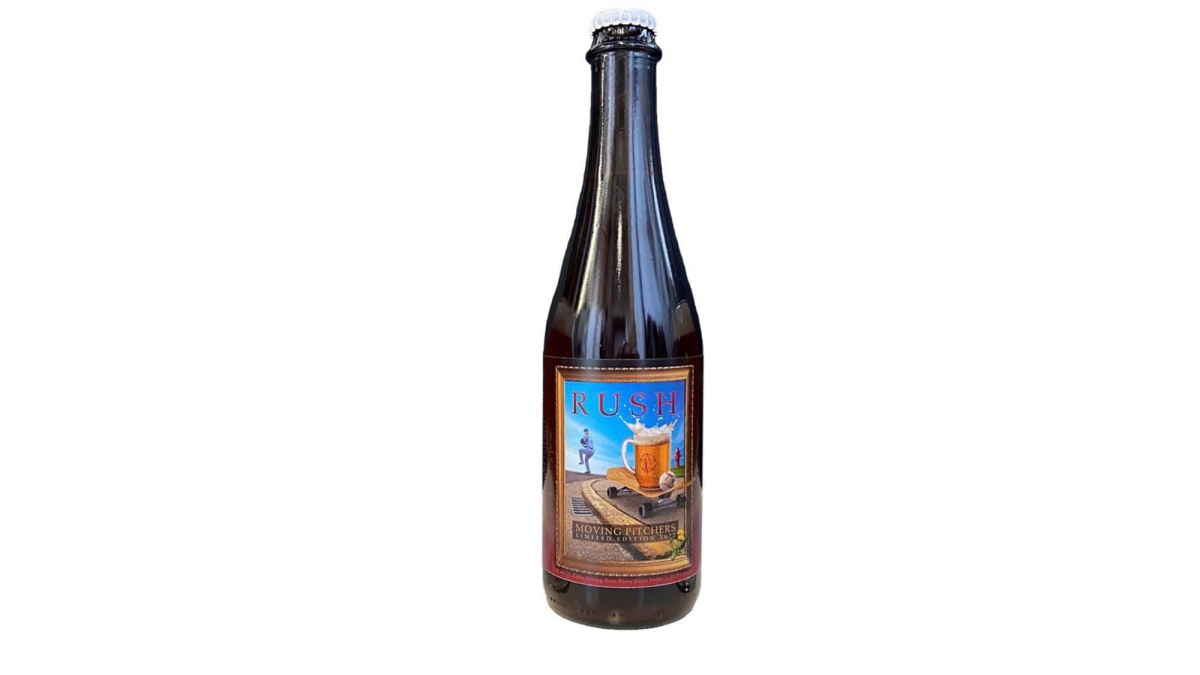 Rush have announced that they have teamed up with the award-winning Henderson Brewery Inc of Toronto for a second premium, limited edition beer called "Moving Pitchers."

The band shared these details: After the success of Rush x Henderson Canadian Golden Ale the band felt there was an opportunity to create a more sophisticated, premium beer.

Their first premium limited-edition beer debuted in the winter of 2021 to coincide with the 40th Anniversary of the band's seminal album, Moving PIctures. That now sold-out Moving Pictures holiday beer was a dark, Belgian style ale with Riesling wine must.

The success of the Golden Ale and first limited run spawned further collaboration between the band and Henderson, and now after rigorous taste-testing, a second premium beer has been approved for a special limited run; Moving Pitchers. This time, the winning recipe is a Belgian blonde beer with a Pinot Noir must. The name, a cheeky play on the famous album cover triple entendre, with the bottle's label art designed by longtime Rush art designer Hugh Syme.

"When we started this project, we were really excited to create the perfect after-gig beer but after spending time working with Henderson we discovered so many styles and flavours for more complex, additional products," remarked Rush guitarist and Beer Scientist, Alex Lifeson.
"We took the taste-testing very seriously," said Geddy Lee, Rush singer/bassist and Beer Drinker, "and picking just one was a tough decision, so we just decided to go with making all of them."

"The Rush beer planning nights have been among my favourite in my six years at the brewery. Sitting around sampling product with these guys - I mean Rock Hall of Famers who I watched on stage for so many years - has been an absolute thrill. Plus, they bring an incredibly broad palate that comes from wine and spirits appreciation. We are very proud of this beer and think Moving Pitchers will be appreciated by any aficionado," said Steve Himel, GM and co-founder of Henderson Brewery.

The Moving Pitchers beer at 11.9% abv, is a strong ale with fruity notes of berries and grapes with a spicy and floral bouquet to round it out. Aromas of maple syrup add complexity while tannins help to balance out the sweetness.

Moving Pitchers premium beer will begin rolling out March 24th in Ontario and will be across Canada in time to have a cold one while listening to the 40th Anniversary Moving Pictures album re-issue arriving April 15th. USA rollout to begin later in 2022.