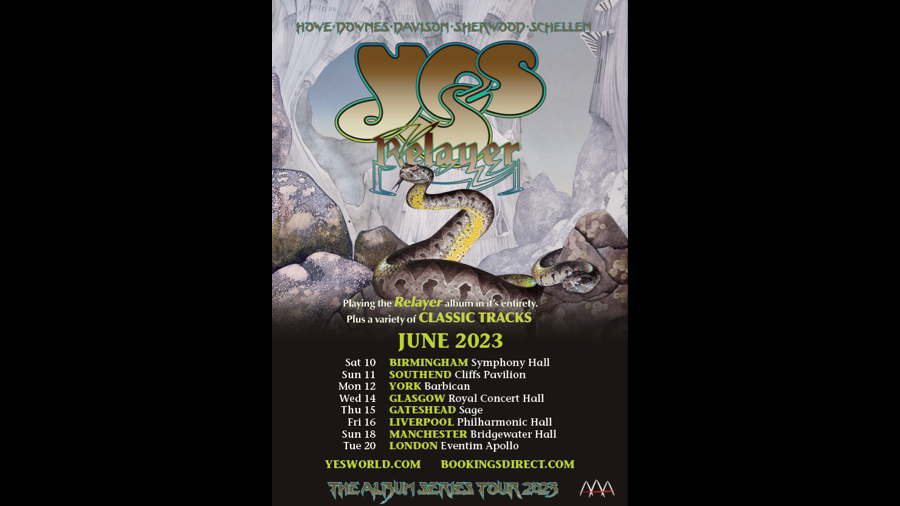 Prog rock legends Yes have announced the rescheduled UK dates for their Relayer Tour, which will feature the band playing the 1974 album in entirety, along with other classic tracks from their career.

We were sent these details: The Relayer Tour was originally planned for 2020 but postponed due to the pandemic and last year's highly successful 50th anniversary of their legendary Close To The Edge album.

The Royal Albert Hall was the original choice for the tour's London show but has no availability, so the band will make a nostalgic return to an old haunt, the former Hammersmith Odeon.

The show will comprise of two sets by the band. The first will feature favourite classic tracks from YES's extensive catalogue. YES will perform Relayer, their seventh studio album, in full in the second set. Relayer marked a slight change in direction bringing an edgier feel to this album. At almost 22 minutes in length, the opening track Gates Of Delirium included a battle scene between keyboard and guitar. The battle gives way to the beautiful closing ballad Soon, a prayer for peace and hope.

Relayer continues with Sound Chaser, a prog-rock-jazz fusion experiment demonstrating the power of Alan White and Chris Squire, and To Be Over, a calm and gentle conclusion to the album, based on a melody by Steve Howe and Jon Anderson.

Released in late 1974 on Atlantic Records, Relayer continued YES's success reaching number 4 in the UK album chart and number 5 in the US Billboard chart.

The UK Relayer Tour dates for 2023 are as follows: