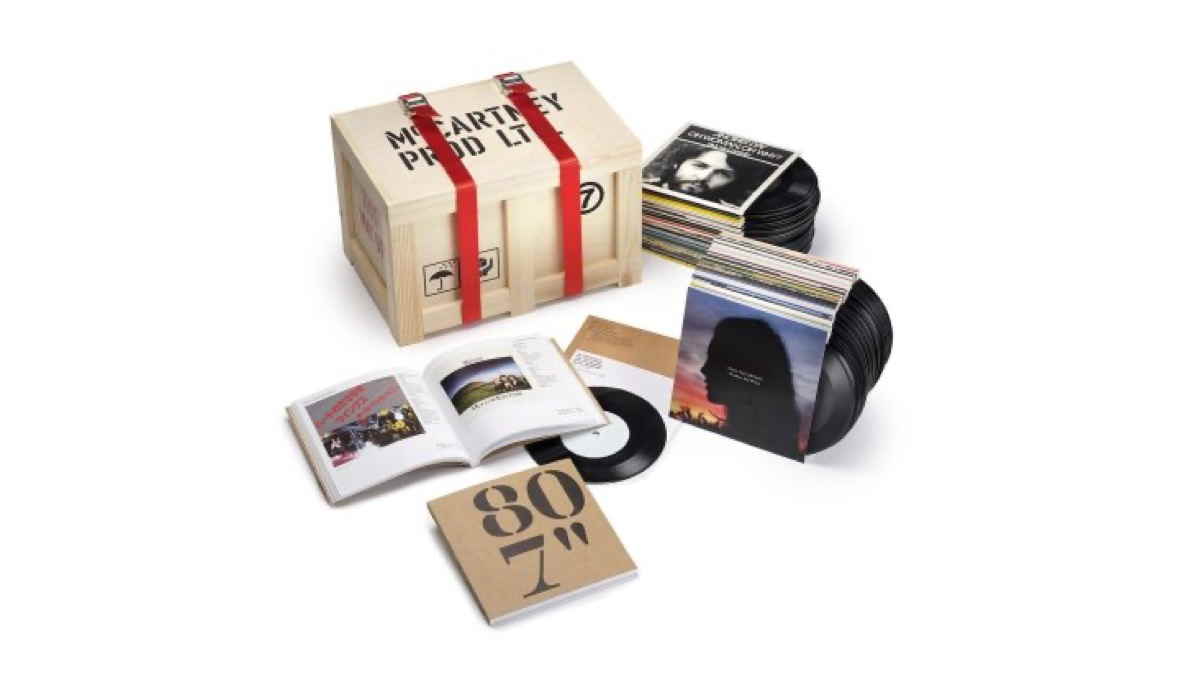 (UMe) Paul McCartney announces the release of The 7" Singles Box, featuring 80 x 7" Paul McCartney singles - including such global chart smashing tracks as "My Love," "Live and Let Die," "Band on the Run," "Silly Love Songs," "Coming Up," "Ebony and Ivory," "Say Say Say," "No More Lonely Nights," "Wonderful Christmastime" and many more. The box set includes 163 tracks totaling over 10 hours of music and will also be released digitally.

Recognized by Guinness World Records as "the most successful songwriter of all time," Paul's 7" Singles Box is a remarkable testament to this accolade, featuring songs that have sound-tracked our lives and that are loved and sung around the world today.

The format of the 7" single had a profound impact and influence on Paul both as a songwriter and as a music fan. Paul recalls in his foreword that comes with this set how he still enjoys the thrill of flicking through crates in record shops looking for new discoveries and how much respect he and The Beatles had for the B-side.

Available from December 2nd, The 7" Singles Box is the ultimate package for any McCartney fan. From 1971's "Another Day" to a 7" version of 2022's Record Store Day Song of the Year, "Women and Wives" (taken from 2020's chart-topping McCartney III) - the 80 singles included represent half a century of Paul's life showcasing his prolific creativity and relentless innovation. An absolute treasure trove of music, the box set features recreations of 65 singles - complete with their original B-sides (using restored artwork from 11 different countries) as well as 15 singles never before released on 7". These 15 singles are made up from tracks previously released on 12", picture discs, CD singles & promos, digital downloads, music videos, two previously unheard demos, and a previously unheard 7" single edit.

The box set is beautifully presented in a special wooden art crate, designed and built in Derbyshire, UK, and is packed with incredible content, including a 148-page book that features a personal foreword by Paul, an essay by music journalist Rob Sheffield and extensive chart information, liner notes, and single artwork. Each box includes a randomly selected exclusive test pressing of one of the singles.

1971, US Mono
Promotional Release
2A: Uncle Albert / Admiral Halsey [Mono]
2B: Too Many People [Mono]

Previously unreleased on 7"
4A: Love Is Strange [Single Edit]
4B: I Am Your Singer

1979, UK
29A: Wonderful Christmastime
29B: Rudolph the Red Nosed Reggae

Previously unreleased on 7"
54A: The World You're Coming Into
54AA: Tres Conejos
54B: Save the Child
54BB: The Drinking Song (Let's Find Ourselves a Little Hostelry)

1997, Reformatted from 7" picture disc
59A: Beautiful Night
59B: Love Come Tumbling Down

Previously unreleased on 7"
68A: Sing the Changes
68B: Nothing Too Much Just Out of Sight [Radio Edit]

Previously unreleased on 7"
70A: My Valentine
70B: Get Yourself Another Fool

2012, US
Christmas Kisses
71A: The Christmas Song (Chestnuts Roasting on an Open Fire)
71B: Wonderful Christmastime

Previously unreleased on 7"
73A: Queenie Eye
73B: Save Us


Previously unreleased on 7"
75A: In the Blink of an Eye
75B: Walking in the Park with Eloise

Previously unreleased on 7"
79A: Find My Way
79AA: Winter Bird / When Winter Comes