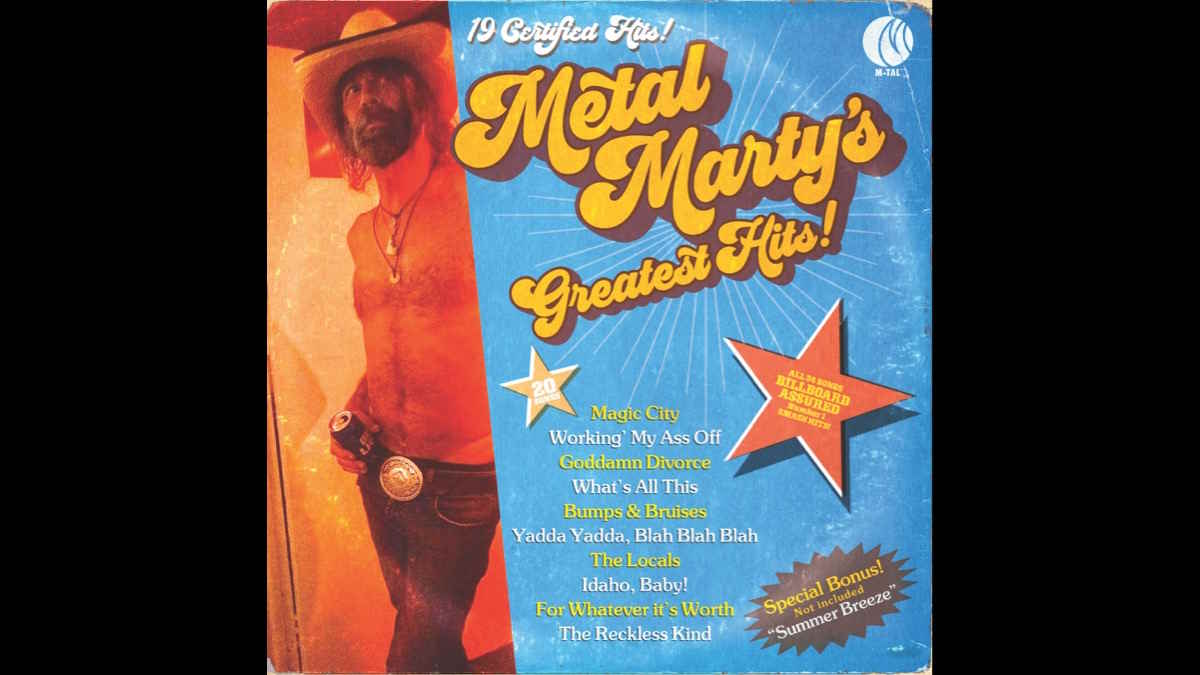 (Reybee) Supersuckers guitarist Metal Marty has announced that he will be releasing his new solo album, "Metal Marty's Greatest Hits", on February 3rd, 2023.

Reybee sent over the following details: Drop the needle on the opening number "Magic City" from the cheekily named Metal Marty's Greatest Hits, and for the next 35 minutes you will be taken on a tour of Magic City, Idaho, an unusual lakeside resort town with a penchant for partying and no shortage of odd characters.

"It's quite a place if ya got grit, which we have in spades," muses Marty "Metal Marty" Chandler. Metal Marty's Greatest Hits pays tribute to his current hometown - the small Idaho burgh, spinning tales of common folks, blue-collar laborers, and dudes named 'Hot Tub' who work hard during the day and play harder at night, conjuring Steve Earle at times, evoking Iggy Pop at others. "I think it sounds like a greatest hits record. There's every kind of song on it, yet it still flows," he explains about the odd name for a debut. "And it's a ridiculous title for a first record."

The songs on Metal Marty's Greatest Hits slip effortlessly across genres while never disrupting the overall tone or losing its deep sense of optimism. The balls-out barnburner "Working My Ass Off" recalls the wildest rockers from the 1950s; "Idaho, Baby" is a shot of anthemic Americana with a not-so-subtle nod to Gary Glitter; and the country-tinged rocker "Goddamn Divorce" feels like a pat on the shoulder from the Big Lebowski's buddy Donnie, "F*** it, dude. Let's go bowling."

"I've been talking about doing a solo album for years and I think Eddie got sick of me yammering on about it, so we just started writing," Marty laughs.

"We hung out in Magic City and wrote down all the funny sh*t that happens to him and turned them into songs," recalls Supersuckers frontman Eddie Spaghetti who co-wrote the album with Marty. "It's a pretty literal interpretation of his life," continues Eddie, "You want to know the legend of Metal Marty? This is it."

The legend of Metal Marty began in Covington, WA, about twenty minutes outside of Seattle, where a young Metal Marty grew up next to a drag strip. "I spent my weekends on my father's pit crew," explains Marty, "His racecar was the only car we had, so every Saturday morning, we'd tweak the carbs, take off the mufflers, and creep it slowly to the track. It was a loud upbringing."

Dubbed Metal Marty at an early age, the Pacific Raceways Drag Strip wasn't the only 'loud' in Marty's loud upbringing. "Jimi Hendrix, Rolling Stones, and the Easy Rider soundtrack were always blasting on the stereo," Marty recalls, "there was also plenty of Willie, Waylon, and George Jones, but KISS was the band I discovered mostly on my own. That really started it for me."

Marty got the call from the Supersuckers in 1999 to fill in for founding member Ron Heathman who was unable to tour for family reasons. "Ron wanted me to do it, he's probably the biggest contributing factor to me being in the band, we were buds," Marty recalls. He later became a permanent member of the band, releasing four albums on the Los Angeles-based indie label, Acetate Records.

Metal Marty's Greatest Hits also includes a rock n' roll version of Roger Alan Wade's "The Reckless Kind," and while it's not autobiographical, it might as well be. Wade remembers his initial encounter, "The first time I met Metal Marty was when he came leaping over the monitor speakers out of nowhere and started singing "The Reckless Kind." He just blew the roof off."

"Yeah, that's how it went down," Marty laughs. "Welcome to the rollercoaster ride of chaos and bad decisions that is my life! When I first heard that song I felt like it was written for me. I've always thought it would be cool to give it the 'arena rock' treatment. I was very proud to play it for Roger, he's my brother for life."

Metal Marty will be performing a solo set with the Supersuckers on the Outlaw Country Cruise in February.