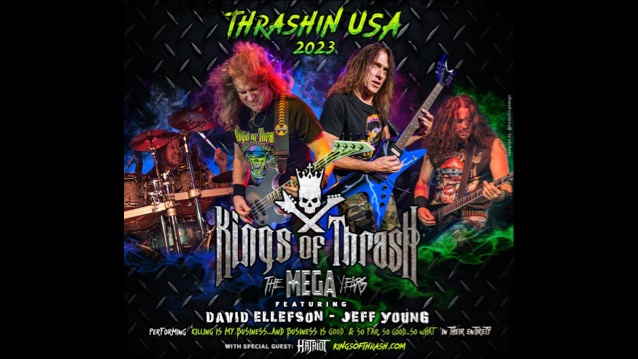 Kings Of Thrash, featuring former Megadeth stars David Ellefson and Jeff Young, have announced the Thrashin' USA Tour that will include the performance of two of Megadeth's first albums.

Ellefson and Young are joined in the group by Chaz Leon on vocals and guitar and Fred Aching on drums and fans will be treated to the band playing the classic Megadeth albums, "Killing Is My Business...and Business Is Good" and "So Far, So Good...So What" in their entirety.

The trek will feature support from Hatriot and is set to kick off on February 16th in Joliet, IL at The Forge and will wrap up on March 15th in Atlanta, GA at The Masquerade.

According to Atom Splitter, "the band has also signed a worldwide deal with Cleopatra Records and will be releasing a live CD/DVD package called Best of the West...Live at the Whisky A Go Go on March 24.

"The 17-song set was recorded and filmed live at the legendary Whisky A Go Go in West Hollywood, CA on October 15, 2022 and also features performances with Chris Poland. The DVD was directed by Michael Sarna."