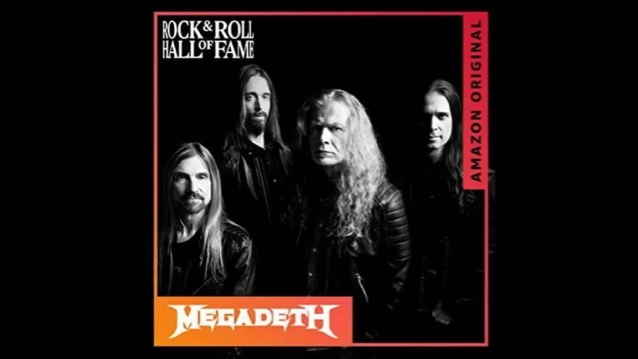 (hennemusic) Megadeth Celebrated Judas Priest's Rock Hall Induction With Special Cover was a top 22 story from November 2022: Megadeth have released a cover of the 1978 Judas Priest classic "Delivering The Goods", exclusively via Amazon Music, as a tribute to the UK band on their recent induction into the Rock And Roll Hall Of Fame.

The song was featured on Judas Priest's fifth album "Killing Machine", which was issued in the US under the title "Hell Bent for Leather." "We've recorded our own rendition of Judas Priest's 'Delivering the Goods' to celebrate their induction into the 2022 Rock & Roll Hall of Fame," shared Megadeth on social media.

During an appearance on the BBC's The Rock Show With Johnnie Walker, Dave Mustaine chose Glenn Tipton as his "Rock God", saying, "I had no idea how much Glenn Tipton and Judas Priest had influenced my guitar playing until I recently covered 'Delivering The Goods' with my band, Megadeth, and got to go over all those guitar riffs again. It was really revealing to me how much Glenn's playing had influenced me."

Read more and stream both the original and cover version of the song here.