An All Star Salute to Lee Greenwood


Big & Rich, Tracy Lawrence and Crystal Gayle will be among the stars celebrating the career of Lee Greenwood in Huntsville, Alabama this October. 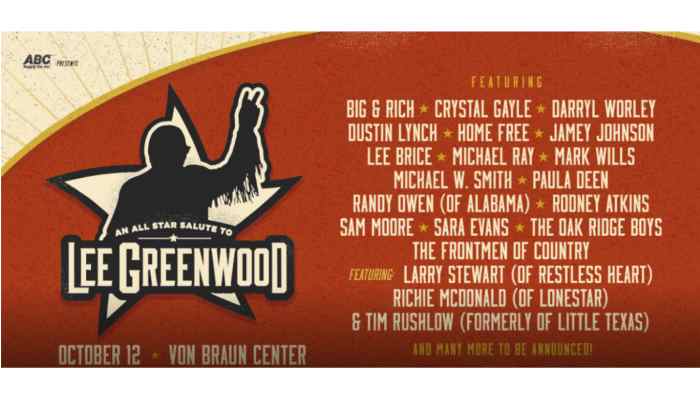 An All Star Salute to Lee Greenwood - Oct. 12 - Huntsville, AL

Fondly known as "Rocket City" because it is home to popular tourist attraction the U.S. Space and Rocket Center, Huntsville, Alabama will be reaching the stars --- country music stars that is --- when the celebratory concert An All Star Salute to Lee Greenwood comes to town. To be held in the city's Von Braun Center, the event will honor Greenwood's 40-year career in which he has had 28 Top 20 singles, seven of which went to #1. Among those hits is "God Bless the U.S.A." which got massive airplay after the 9/11 attacks; Greenwood actually first released the patriotic anthem in 1984.

Among the country music stars set to appear are Big & Rich, Sara Evans, Crystal Gayle, Randy Owen of Alabama, Lee Brice, Jamey Johnson, Darryl Worley, the Oak Ridge Boys, Janie Fricke, Jeannie Seeley and Neal McCoy. Through his publicist Greenwood said, "I am so looking forward to this night. I am going to get to see so many of my friends that I have not seen in a while, and to know they are coming to truly honor my career and songs really means a great deal to me."

Ticket information for An All Star Salute to Lee Greenwood is here.

For information on the U.S. Space and Rocket Center and other fun things to do in Huntsville, go here.