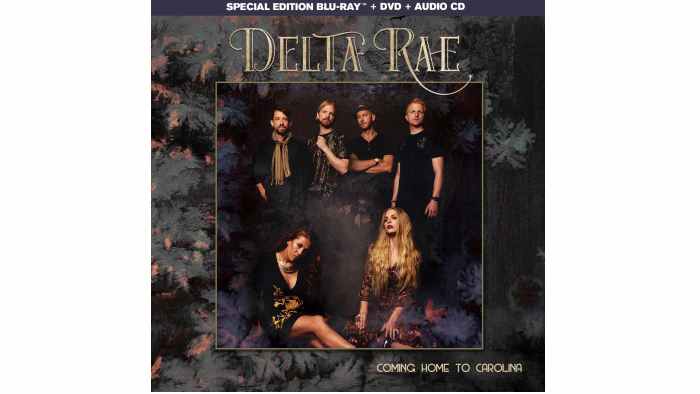 So I went to a concert the other night and a gospel prayer service broke out. OK, it wasn't really a concert, it was a live DVD by the band Delta Rae. And it wasn't really a prayer service but there was definitely something beyond a regular concert...something that transcended a normal music event. Without being gospel, there is an undeniable soulful quality about the music of Delta Rae. that just radiates the atmosphere of their native North Carolina.

For their first DVD/Blu-Ray/CD live release, the band could not have picked a more receptive audience than the one from their home state. And not a more entertaining set could be captured than from the two shows filmed there. The biggest strength of this show comes from two prime elements; the superb songwriting and the vocal diversity of the four front people.

Brothers Eric and Ian Hölljes write the songs and they along with sister Brittany and bandmate Elizabeth Hopkins split vocal duties. The group is rounded out by bassist Grant Emerson and drummer Mike McKee. The two brothers each have individual vocal styles both capable of adeptly translating the emotion contained in each superb song. They are complemented by the energetic delivery of Elizabeth whose warm singing provides a lighter contrast to the more dramatic material. Brittany brings a bewitching presence that hasn't been seen since Stevie Nicks and her impassioned singing is another welcome side to the group.

The band gets things started in a big way with the first song, "Let Me Take You There" and Elizabeth's enthusiastic delivery sets the stage for a fun night and she almost solely wills you to have a good time watching this. Brittany brings her unique vocal stylings to "Holding On To Good" and her witchy stage mannerisms act as a good counterpoint to Elizabeth's straight-forward delivery.

Basically from there, I could describe every next song as a highlight to the set. Everybody has great stage presence and the songs in this show are essentially a greatest hits culled from their three records. I have to say that unequivocally, the standout part of the performance for me is the song "Wrong Ocean" which coaxed some waterworks from these eyes, despite never hearing the song before. The song is an emotional raincloud and Eric sings it convincingly.

Delta Rae's songs kind of veer in a few different directions from pop/rock stuff to more Dan Fogelberg-Jackson Browne type material planted in an Americana base. You could add in a few other avenues as well. That might sound like a sonic disaster for some other bands but this one has a kind of invisible cartilage that holds it all together in a way that makes sense. They are able to pull off the Fleetwood Mac classic "The Chain" and make it seem like one of their own songs seamlessly.

This is one of the only live records/videos that I can play over and over. Some live sets act merely as a souvenir from the show and you haul them out once in a while. This is not the case here. I've had the CD version of the show playing on repeat since I got it as it stands as a great record on its own. Truly a magical night and a terrific snapshot of a band that is just starting to know how good it is.

Get your copy here.