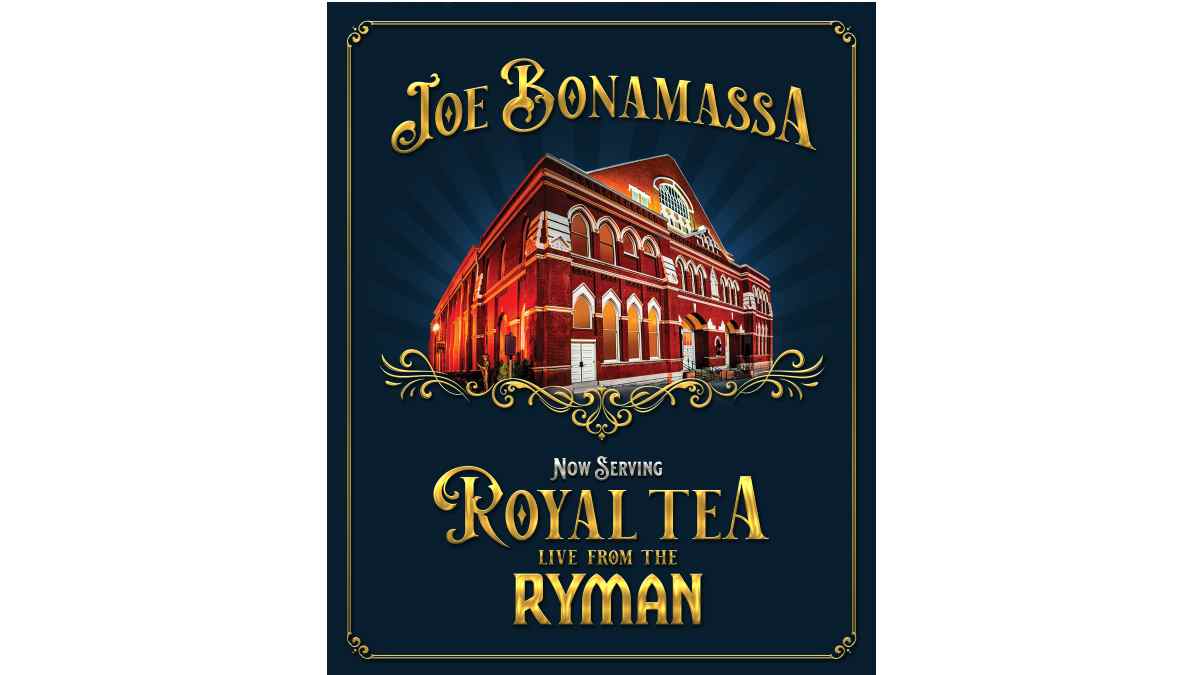 by Kevin Wierzbicki
Bonamassa explains at the beginning of this film how he and his band were itching to get out and perform the music from his Royal Tea album but firstly, band drummer Anton Fig suffered an injury that led him to temporarily be unable to play and secondly the pandemic hit, making live performance impossible. Not being one who is okay with idle time, Bonamassa came up with the idea to livestream a concert and also film it and Now Serving came to fruition.

Now Serving: Royal Tea Live from the Ryman finds Bonamassa and his band performing his Royal Tea album in its entirety, with the exception of that album's closing track "Savannah." Nashville's vaunted Ryman Auditorium is devoid of fans for the event but Joe placed cardboard cutouts in the seats, including one of his mom. And an interesting touch for the viewer's sake is how there is crowd reaction (from various shows over the years) spliced into the film after each song, and it is noted on screen where each snippet of applause came from.

The songs are performed slightly out of order from the album but the show begins with "When One Door Opens," the cut that also opened Royal Tea. The song is relatively mellow until its midpoint when the drums start pounding (here played by Greg Morrow) the rhythm starts rocking and Bonamassa starts really going to town on a Telecaster, one of many guitars that he plays during the show. "High Class Girl" plays out to a funky strut suitable for appreciating that high class girl's walk, and the swamp rocking "Lookout Man!" has bass man Michael Rhodes setting his ax to "fuzz" while Jimmy Hall (of Wet Willie fame) adds flavor with his harmonica. Joe's guitar mimics the emotion of a breakup on the melancholy "Why Does it Take so Long to Say Goodbye," "A Conversation with Alice" is a rocker and Bonamassa gives a nod to Jimi Hendrix on "I Didn't Think She Would Do It" to a projected background of Hendrix-era psychedelic graphics. A highlight from late in the show is "Beyond the Silence," a cut where both Joe's vocals and his guitar work drip with tortured emotion.

After the playing of Royal Tea ends with "Lonely Boy" Joe and friends play a few covers, beginning with an incendiary take on Rory Gallagher's "Cradle Rock" and a version of Free's "Walk in My Shadow." A surprising but very cool choice to end the show is the Jethro Tull oldie "A New Day Yesterday" which segues into "Starship Trooper," originally performed by Yes. As you would expect, Bonamassa shows incredible finesse while scorching his fretboard all through the show and the camerawork affords lots of close-ups of his nimble fingers. The band doesn't miss a note either, and other than those mentioned already they are: Reese Wynans on keyboards, Rob McNelly on guitar and Jade MacRae and Dannielle DeAndrea on vocals.