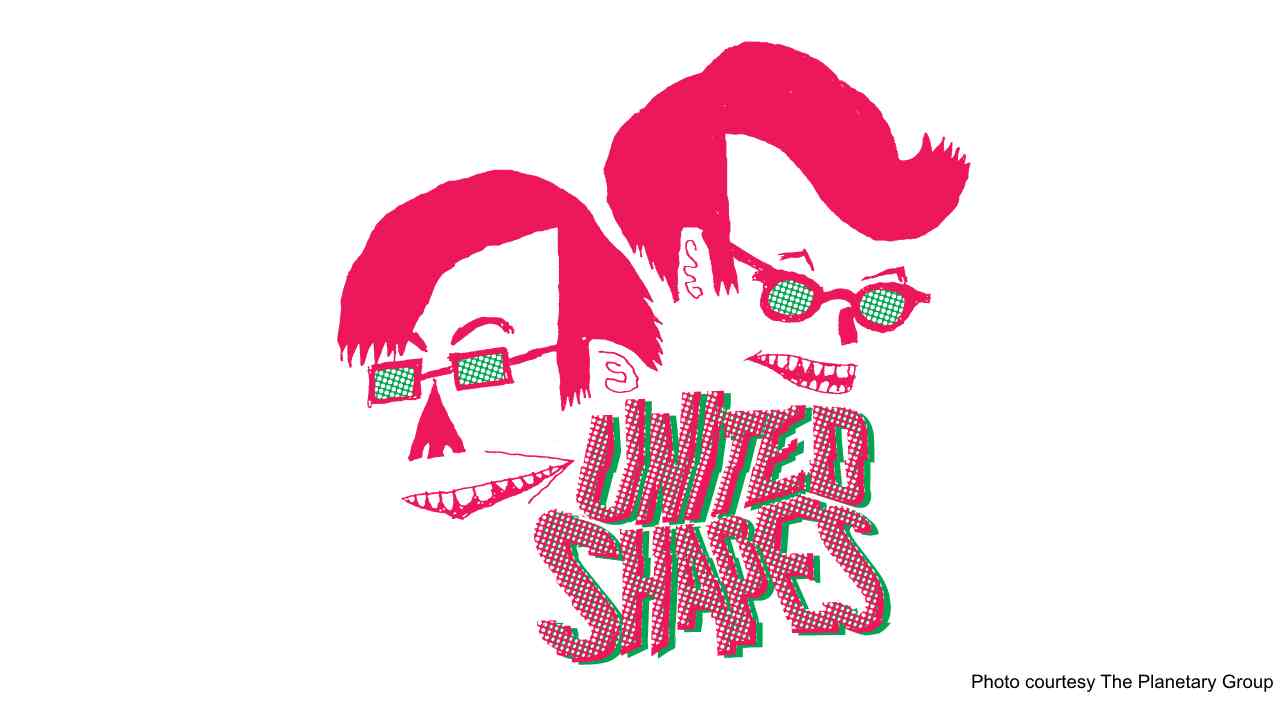 United Shapes just released their new single "Peppermint" (from their forthcoming album "Compound Shapes") and to celebrate we asked singer/multi-instrumentalist Joseph Devens to tell us about the track. Here is the story:

I used to spend a lot of time hanging out and writing song lyrics at the corner store, smoking endless cigarettes and draining Diet Cokes outside next to the ice machine. (I don't do that anymore for two reasons: One, I quit smoking, and two, it's creepy to hang around outside a corner store singing to yourself.)

We had this concept: All the song titles on our new album would be compound words. The hard part, surprisingly, was picking the words. There are so many. So, I found myself at the corner store, cigarette and Diet Coke in hand, Googling "compound words" on my phone. The first ones to catch my eye were "peppermint" and "teardrop." I thought: "I'll write a song with two compound words! That'll show 'em!" I instantly began brainstorming ideas for a song called "Peppermint Teardrop." I had this idea of a snowman who commits a crime and leaves behind a single teardrop at the crime scene and is caught based on the DNA evidence. I had this whole elaborate narrative cooked up with lots of backstory on the victim, the snowman, and the detectives who were looking for him.

When I got home, I sat down at the piano. I often have song doodles, as I call them, in my brain storage for potential use in future songs. I started playing one of these song doodles-a few chords that I had been calling "Opposite Day." It soon became clear that "Opposite Day" was going to become "Peppermint Teardrop." It also became clear that the song had way too many lyrics. I distilled the idea down to its core thesis: A snowman commits murder. I cut the teardrop idea and all the backstory about the other characters, and the much simpler "Peppermint" came to be. I kept the murder concept because there aren't an awful lot of pop songs about that subject (McCartney's "Maxwell's Silver Hammer" comes to mind), and I wanted to try my hand at writing one.

Originally, the song featured a sample from Henry Mancini's "Pink Panther" theme. (The big horn blast at the end of the song.) It fit perfectly into the chorus. I contacted the song's publisher, Sony, to obtain sample clearance. It was denied. We were devastated. We had two options: do without the sample in the song or recreate the sample ourselves. Fortunately, Drew plays trombone, and we were able to recreate the horn blast during one evening in his garage. We recorded around 40 tracks of Drew belting out trombone phrases similar to the Mancini arrangement, then I edited them together using Audacity's handy pitch-shifter to make some of the recordings sound like trumpets and some like baritone saxophones. An entire horn section with just one trombone. We fit the new horn blast into the mix and were pleased to hear that it sounded even better than the Mancini.

I didn't plan on making a music video. I had just finished creating a handmade, fully-animated music video for a contest held by They Might Be Giants using traditional cel animation. It had taken me a year to complete, and I was exhausted. I found myself with nothing to do for the first time in a year. I think it was that boredom, plus the fact that I couldn't really leave my house because of the virus that eventually led me to start animating a music video for "Peppermint."

I started doodling some imagery for the video concept. Because I simply didn't have the time to make another fully-animated video, I decided to keep things simple. "I'll just draw a series of consecutive still images to convey the story," I thought. But, as is usually the case with me, it turned into an ordeal with lots more detail and animation that I had planned on committing myself to. I ended up having lots of fun doing it, and I'm pleased with the finished video. (Which means, of course, that now I'll have to make more animated videos for our songs as we continue to release music. I have no problem with that.)