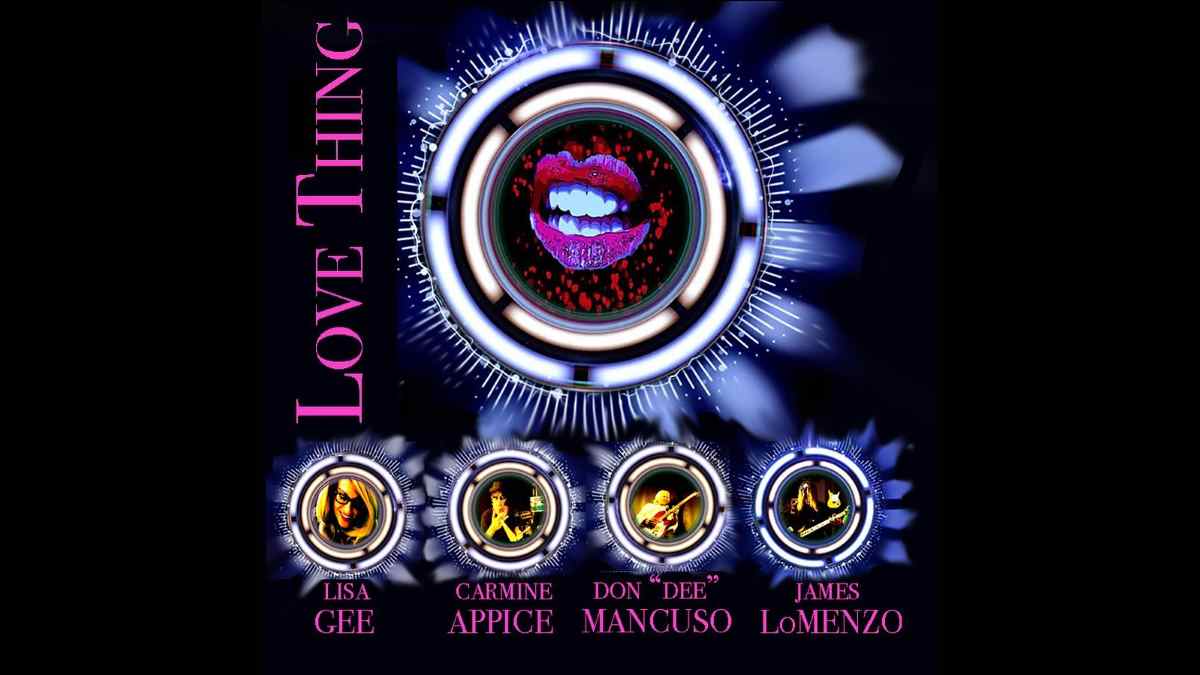 Lisa Gee just released her new single "Love Thing", which was produced by music legend Carmine Appice, and to celebrate we asked Lisa to tell us about the song. Here is the story:

Pieces of the music for Love Thing had been actually rolling around my head since I was 14 years old. I've written over 200 complete songs, but I write my songs by fitting separate chunks of music together to make a whole song. I've been doing that as far back as I can remember. It's amazing when 5, 10 or even 40 years later, those untethered melodic chunks start fitting together like puzzle pieces, usually the result of alteration or a new situational phrase fitting perfectly into the space of a musical measure, and that's when the magic starts happening! When the virtual musical stork arrives, it becomes a thing of beauty to the parent of the song! Love Thing ended up being about my crush on a famous punk guitarist named Johnny Ramone.

From the moment I realized the Ramones existed, I was a fanatic! Every time they were in town, I was there. I'd seen them before, but in 1979, everything changed. I was in high school - sort of...my high-school experience wasn't conventional - I was placed in the "Experimental Program," or "XP," an educational project designed for the very intelligent, the intellectually deficient and/or the behaviorally challenged (feel free to decide for yourself which of those applied to me); attendance wasn't mandatory - I took full advantage of that perk! Since I didn't have to actually be at school, I also had a full-time job! I was an answering-service operator in downtown Chicago at the time and I answered for The Aragon Ballroom, a venue still in existence today. Because of my relationship with the Aragon, I was always able to get free "press box" tickets from the owner. In 1979, The Ramones were playing The Brawlroom (as we've affectionately referred to it since the 1970s) and not only did I get the tix, but I also scored backstage passes! That was the beginning of my absolute crazy love of rock stardom! I brought my close friend Lance and we went backstage. Ah, yes - the groupies. I'd never seen anything like them! I remember seeing one gorgeous girl wearing a tight-fitting purple leopard-print jump suit. I thought "yeah, this is the life for me." I got Joey Ramone's autograph and then I turned and saw him. The gloriously gorgeous Johnny Ramone. I thought my heart would EXPLODE. Spoiler alert: it didn't, so I lived to see another day and live a wacky, adventurous life...but that's a story for another day! Back to The Ramones, my crush on Johnny, and The Legend of my song, "Love Thing."

SO. Teleport to the early 1980s. I saw the Ramones again (of course I did!) Their concerts were usually general admission and I always managed to push my way to the very front of the stage directly under Johnny. He always wore jeans with holes over his knees. This left the door open for me to pinch-squeeze his knees, which I did at every opportunity! Seriously. And every time I pinched, he handed me a guitar pick. For years. I had a jar full of his picks. I have that jar somewhere in my attic among hundreds of boxes like every good hoarder. One day, I will find that jar! At the end of almost every Ramones show at a large venue, they announced a surprise show at a small, local venue like a club or bar for the following night. It was amazing - to see them up-close and personal in such a small venue. After this particular show, they announced that they'd be playing Northwestern University. I dragged my boyfriend at the time with me - he was also a huge Ramones fan as well as a roadie for a local touring act himself.

We got to Northwestern the next night, and we were asked for our student ID, which we didn't have because we weren't students. I was so dejected. My boyfriend said "let's go see if we can find the equipment truck - maybe we can find a roadie and ask for tickets." We walked toward the back of the venue and lo and behold, THE EQUIPMENT TRUCK, COMPLETE WITH A CIGARETTE-SMOKING ROADIE LEANING AGAINST THE TRAILER! My boyfriend said "hey man, do you think we can get a couple backstage passes?" The roadie replied, "no." I said, "OH *PLEEEEEEEEEEASE* WE'RE THE BIGGEST [*expletive deleted*] FANS IN THE WHOLE WORLD!" He look at me, and said, "ok." We were both stunned but true to his word, the roadie handed us 2 all-area backstage passes! I hugged him and thanked him and we went in like a couple of bosses. My boyfriend was way more brazen than I - before the show, he dragged me onto the stage. Some guy walked up to us and yelled at us, "HEY! Does Maury know you're here on the stage????" And my BF answered "uh...yeah - Murray knows." And I quickly corrected him - "Yes," I said, "Maury knows." After the show, my BF said "let's go backstage." I said to him, "you know, they're going to know they don't know us." He was undeterred. I just rolled my eyes and followed. We walked down the narrow stairway into the bowels of Northwestern's basement under the stage area. It was a dank basement, with cement floors, pipes on the ceiling and bare lightbulbs barely illuminating the cold, humid hallway toward the old wooden door that had a handwritten sign that said "Band Room."

I was expecting a large room full of people. It was, however, a room that measured approximately 12' x 12', it had a small table covered by a white plastic cloth. On it was beer and some food. The room also held a few folding chairs and a small bench that could conceivably hold 2 people. I sat on that bench, crippled with anxiety and fear at being in a small room with only 4 other people besides us - Johnny, Joey, Dee Dee and Marky. I was paralyzed with fear! My BF was walking around, helping himself to food and beer, shaking the hands of these legends and telling them, "good show, man! Good show!" I was mortified. Then Johnny Ramone walked up and sat down NEXT TO ME! I thought my heart would explode!!!!! But it didn't. Although my fear culminated in my blowing the opportunity to actually forge some sort of relationship with Johnny. I couldn't speak and I just looked at my spike-heeled shoes and thought to myself that my shyness would be my undoing for my goal of marrying Johnny Ramone. I was so infatuated with him and in that moment, the song started coming together. I sung to myself, "I'm so shy, I don't know how you found me...." Then my mind shifted to "oooooo, the fascination! Every little love thing...Ooooooo infatuation! Every little love thing...." and the first verse and bridge were complete. From there, the rest of the song just fell into place, and by the time I got home, the song "Love Thing" was written.

Beam to the present! I have been working with drummer Kenny Aronoff (John Mellenkamp, John Fogerty, Jerry Lee Lewis, The Bodeans, Avril Levigne, Alanis Morrissette and a million others) since 2017; Kenny has functioned in the capacity of my mentor, alongside James Lomenzo (Megadeath, David Lee Roth, John Fogerty), both rock and roll session and touring veterans. Kenny in particular has a similar classical background as my own and performed in orchestras as a timpanist and percussionist since he was in grade school; he himself was mentored by the likes of Leonard Bernstein and Vic Firth - he helped me develop and advance my musical style, my knowledge of music theory and timing and an introduction into the music business as a whole. It was suggested to me that I should also seek out the counsel of the legendary Carmine Appice, yes - the same legendary drummer who so impressed a young John Bonham that the Led Zeppelin drummer actually attributed his own style to Mr. Appice - the same legendary drummer who wrote the Rod Stewart hits "Young Turks" and "Do Ya Think I'm Sexy," as well as others and who has performed in, written for and developed his own bands and projects like Blue Murder, King Kobra, Cactus and Vanilla Fudge as well as his current projects that include Guitar Zeus...but what if he'd agree to work with me?

It was a lightening strike that I was able to actually connect with Carmine - I requested a conference with him on a site that connects famous musicians with fans (if the famous musician agrees) and I was shocked when I reached out and he accepted! When he realized that I was indeed a serious musician with years of experience writing music, he agreed to work with me as not only a contributor on drums, but also to produce the music on which we worked. He reviewed my material and my image. He thought it would be productive to "rough up" my sound in an effort to make my sound more closely match my image; not only to make my music sound rougher, but also to develop the hooks to make my songs more "hit" oriented. I have recorded the song "Love Thing" 4 times previously and although I knew the song had potential, it has NEVER sounded so amazing since Carmine got his hands on it. He worked with me on not just roughing up my instrumentals, but also on rocking up my vocals. I couldn't be more pleased with the outcome!

Carmine wrote some new structural elements into the song and produced it from start to finish, working with not only me, but also with my long-time musical partner and guitarist, Don Mancuso. Carmine spent literally hours for days working with us to transform Love Thing from a dream of mine into an amazing musical reality. It's been a long, winding musical journey. I couldn't be happier with where I am on this road and I can't wait to see where it inevitably takes me! I hope you'll come along with us for the rest of the ride!

Hearing is believing. Now that you know the story behind the song, listen and watch for yourself below and learn more about the Lisa here