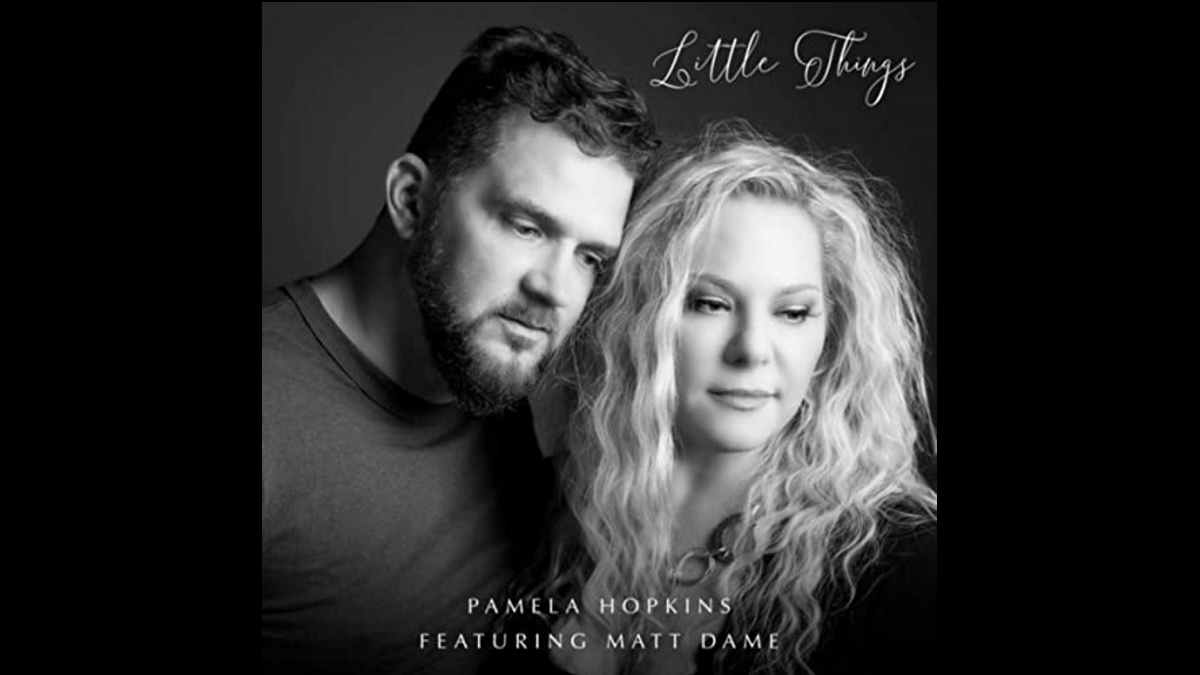 Pamela Hopkins recently released a duet with Matt Dame called "Little Things" and to celebrate we have asked her to tell us about the track. Here is the story:

About a year and a half ago, I had this idea of writing a duet with a male singer. At the time, I just knew it was going to be some sort of love song. It wasn't until almost the summer of 2020 that I had the title for it and an idea for the song. In my mind, it was going to be this amazing love song about all the little things that make people stay together and stand the test of time. The challenge was to find the right male voice and co-writer to help me complete my vision of what I had going on in my head.

I talked to a couple of male singer friends of mine about writing a duet. Both said they'd love to help me write something, but never would commit to actually sitting down and writing. So, being as patient as I could possibly be, I waited. And waited. Annnndddd waited. I never could get either to find any time to get together with me for a couple of hours and just write. So, my search began again for that "perfect fit" that would help me finish my thoughts for this love song.

I preface all of the above to bring you into how I came across finding my co-writers and duet partner for "Little Things."

I have met a lot of really cool people over the past few years as a dueling piano player and some have become pretty good friends. Different conventions would come to town and bring various groups into the club I play for (Willy D's Dueling Piano Bar). Every year (maybe two or three times a year) some specialized police conference would be in town bringing law enforcement officers into the club after their meetings/classes ended for the day. Being a former police officer myself, I would of course hang out with some with them on my break. Some of the officers that I didn't already know, I had become acquaintances/Facebook friends with. Through Facebook they would let me know when they were back in town and make sure we had enough tables for them to come watch the show.

One such officer had asked me a couple of times over the past few years, if I had heard of this guy named Matt Dame? Unfortunately, I had not. He mentioned that Matt used to be a police officer for Searcy Police Department and that he quit doing that a while back and moved to Nashville, TN to pursue his music career. I didn't think much about it until one of my former Captains and good friend, Grady, asked me the same thing about a year or so ago. So I thought, I probably needed to find out who this guy, Matt Dame, was. Both had suggested I reach out to him because we would probably sound good together. So I decided to look him up on Facebook. I also looked his music up and fell in love with his voice and song, "Whiskey and Memories." His voice was amazing and I felt like, if he'd agree, this was my "perfect fit."

So as I said earlier, I had this duet song idea going through my mind for a while. A love song that described the reason people stay together. I am a people watcher and find interest in what makes people work in a relationship and what makes people break up. So I started to explore the things that make me stay right where I am...with my husband, Jason, for over 26 years now.

I contacted Matt through messenger and got a little acquainted with him. Having mutual law enforcement friends in common, someone had also spoken to him about my music/singing and how he should get to know me because we were both singer/songwriters/musicians and would sound good together-I think it was his cousin Dustin (if my memory serves me correctly). I shared my idea with Matt and told him that I would be honored if he would help me write a duet and sing it with me (again--I love his voice --check out any of his songs, but my favorite is "Whiskey and Memories"). He liked my idea (I guess lol) and we scheduled a writing session. He brought one of his good friends in to write with us, (Co-writer of "Whiskey and Memories") Trafton Harvey, who is amazing at putting ideas into workable lyrics. So through a zoom meeting, we took about an hour and half or so and wrote, "Little Things."

I remember at the beginning of the zoom meeting, me presenting my idea again and giving the guys the title I had in mind. I told Matt that I had a list of things that kept me with my love (so I texted him my notes)...but that I could only speak as a woman and needed the other half of the song from his and Tafton's point of view. Once we brainstormed a little bit, the words just started to flow. Matt was sitting there with his guitar and started playing the sound he had in his head and it was just perfect!

In October 2020, I went to Off the Row Studios in Franklin, TN--right outside of Nashville, TN, and cut my next 6 songs (with P.T. Houston as my Producer)...Matt and I met for the first time in person. We went over how the song was going to be laid out. In my mind, and how we wrote it originally, the entire first verse was supposed to be just me singing and the entire second verse was supposed to be just Matt singing. Our Producer, Houston, read the lyrics and pitched the idea he had when he read the lyrics; which was for us to trade lines back and forth. Looking over the lyrics, we decided to give it a try. That small change made the song even better than what I thought it was going to be. Within about two hours, we had the cover photo shot (with Erin McCaffrey), and the entire song recorded. I can tell you that I am super proud of this song and how it came together. I'm sure other people may have ideas on what could be done differently or better with this song, but in my opinion, it is perfect! I couldn't have asked for anything better. I hope that other people love it as much as I do and feel the emotion we put behind the idea, lyrics and sound.

Hearing is believing. Now that you know the story behind the song, listen and watch for yourself below and learn more about Pamela here