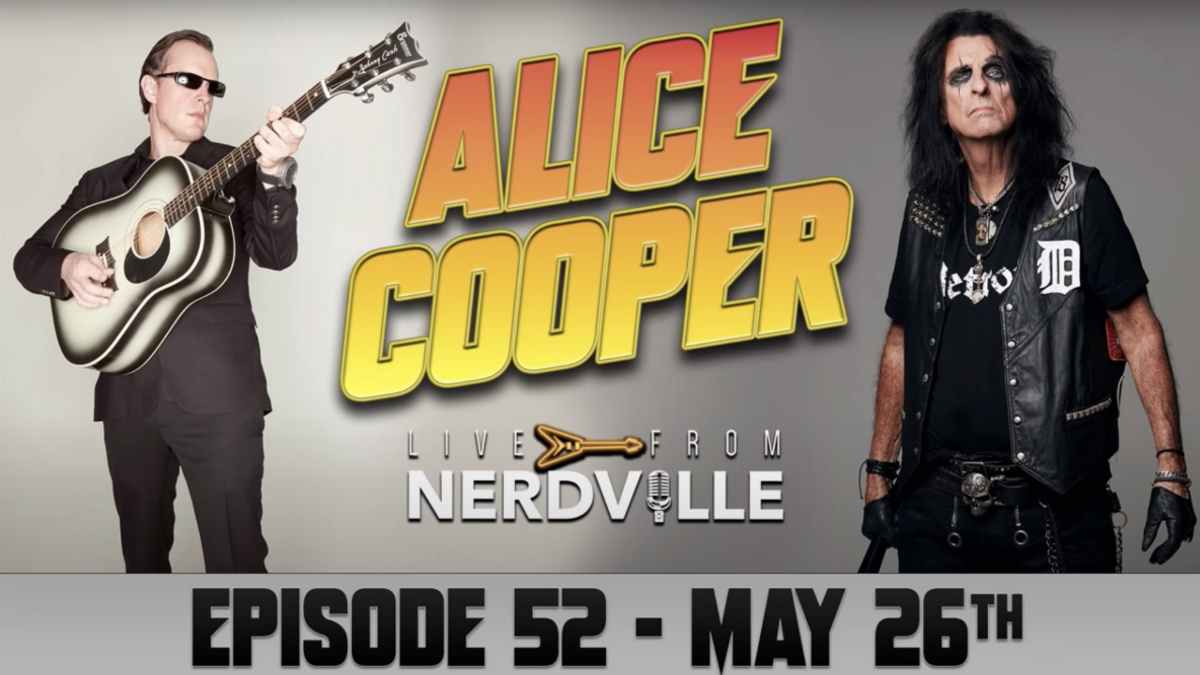 Alice Cooper was the featured guest on the latest episode of Joe Bonamassa’s hit interview series Live From Nerdville and he discussed a variety of topics. The show sent over the following details:

Joe asks Alice about his extensive fall tour… “Well, we cancelled 180 cities last March 7th and we were in Germany doing Rock Meets Classic when we got the news that from the officials saying that we had 24 hours to get out of Germany before the borders closed. Needless to say, that was the last stage Alice saw for a while!”

“It was like a house of cards It just all collapsed in one day!” He continues, “We also did a benefit show with Queen in Sydney Australia. It was a benefit for the fire disaster that happened over there...95,000 people attended and that was the last show we did as a band. At least it’s a good way to go out!” – AC

Furthering the conversation, Alice tells Joe how once David Bowie was going to do a tour where he played only new stuff and none of the hits. Alice exclaims “Are you crazy? That’s just a stupidest idea I have ever heard!” True story. You gotta give play the hits.

Joe asks Alice what got him into music. Alice divulges, “I was 15 and I heard these songs and I thought what is going on with the radio? It was Beatle Mania.” This motivated Alice and two of his friends to each buy an instrument and start a band. “We started out playing music along the lines of the Yardbirds. We wanted to the American Yardbirds. Why? Because they were the coolest bands at the time. We also liked The Kinks, Them and The Who.”

“Later we got into Paul Butterfield as well, but it was always hard rock.” Joe shares his own inspirations, “For me, I got into Jeff Beck, and it was the Truth album that really took me over the top. To me, he was the first guitarist to weaponize a guitar!”

“It was a magical time in music in England,” Alice agrees, “and I think the competition helped things! Because you had Clapton, The Yardbirds, John Mayall, The Who, and then Hendrix shows up in London and completely changes the game!”

They continue on to discuss the fact that you can no longer test new songs you wrote while on tour because with smartphones you test a song one day and then the next day it’s all-over social media. Which, for them, kills the excitement of creating and presenting a new album. “After the first couple tour stops, the next tour stop already knows your setlist!” says Joe. Alice then praises Joe for being one of the faces of the blues and that younger generations are more familiar with because of the way he plays.

Other conversations include playing and recording with tracks, and dissecting the playing live of McCartney where it’s all perfection, in contrast to If you see the Rolling Stones live it’s “gloriously sloppy!” (AC) Alice once asked Charlie Watts if the band knew any endings to their songs? To which Watts replied with “Nah! not really!” “Despite the chaos, they are really symbiotic and somehow it all comes together!” – AC.

As they go on discussing touring, Alice shares his affinity for the Detroit scene, remembering a major festival he played there. “You saw MC5, The Stooges, I saw Iggy Pop and realized that I may have competition…We ended up moving there for a while. It was also cool because Motown players and artists would support rock bands and vice versa.”

Then they talk the hits! “We went national with ‘I’m Eighteen’. CKLW Radio in Detroit played the track. We were up against Sinatra, Supremes, Simon Garfunkel then us! That song took us out of Detroit.” Joe asks Alice if he thought it would be a hit and he says, “No! In fact, our management wanted us to dumb it down some. And we kept telling management that we want to be like the Yardbirds! But as it turns out, the simplicity was very powerful!” The only song Alice thought would be a hit and it was “School’s Out.” He says, “it’s a timeless anthem.”

Joe asked when Alice knew they were famous? “When people were reaching out to me as Alice. I took on the name and we had a coming out party at the Ambassador Hotel in L.A. We had drag queens, cigarette girls it was a total night of insanity!”

In England, they tried to ban the band because” they’ll destroy their youth, we were #1 on the charts, we sold out Wembley. If the press hated us, then we became more famous! What separated us from other bands was that we wrote our own songs. Plus most bands couldn’t write angry songs!” AC

They talk about their managers, and how long they’ve had them by their side. Then Alice talks about how he got rid of all his clients and just managed Alice until he got a call from The Beatles, and they wanted him as a manager but instead he offers to just handle their merch operations. As Kiss says, Rock n Roll is dead!

They talk about Greta Van Fleet, Alice’s latest album, and Joe even asks, “Who the most interesting person you ever played golf with?” Alice’s response? “Groucho Marx. He knew Bob Hope, Dean Martin, and Jerry Wilson! Can you imagine the banter?” Watch the episode below: