Hooked On A Feeling Hit Maker B.J. Thomas Dead At 78 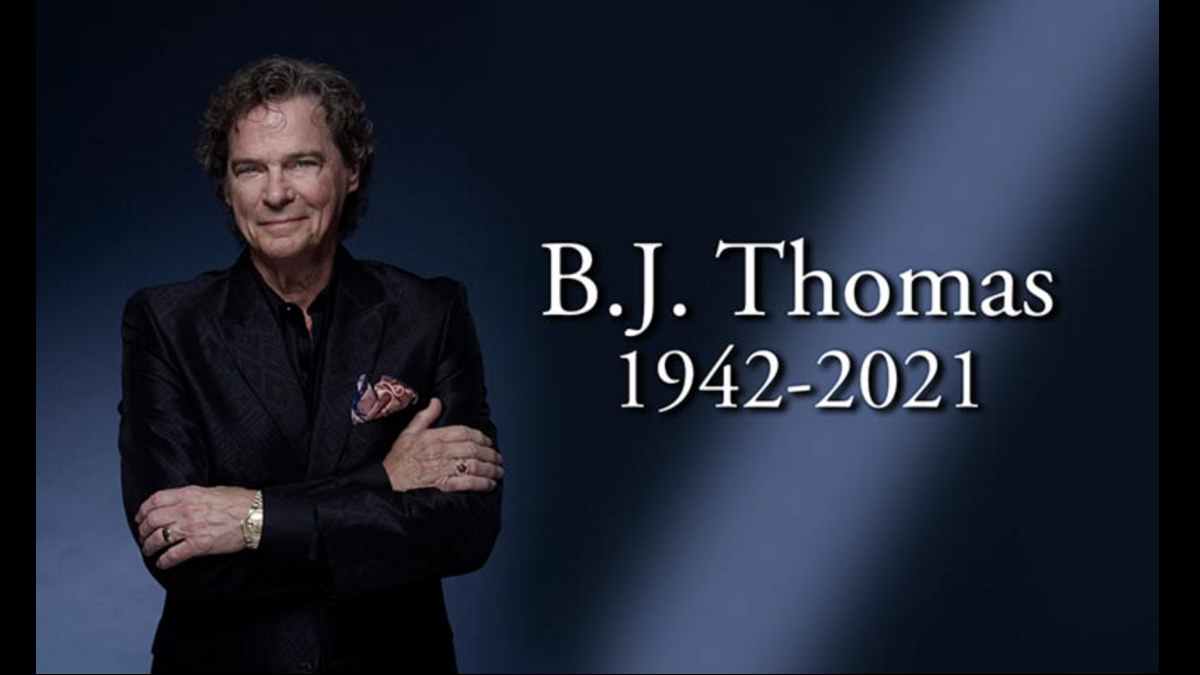 B.J. Thomas, best known to rock fans for his hit "Hooked On A Feeling", died on Saturday, May 29th, at his home in Arlington, Texas from complications due to stage four lung cancer. He was 78 years old.

We were sent the following about the five-time Grammy award winner and Grammy Hall of Fame inductee: Few artists have left a more indelible mark on America’s musical landscape than B.J. Thomas. With his smooth, rich voice and unerring song sense, Thomas’s expansive career crossed multiple genres, including country, pop, and gospel, earning him CMA, Dove, and Grammy awards and nominations since his emergence in the 1960s.

Thomas’ career was anchored by numerous enduring hits, among them his million-selling cover of Hank Williams’ “I’m So Lonesome I Could Cry,” the Grammy-winning “(Hey Won't You Play) Another Somebody Done Somebody Wrong Song” and the iconic “Raindrops Keep Fallin’ on My Head,” which won the Academy Award for best original song. A five-time Grammy award winner and Grammy Hall of Fame inductee, Thomas has sold over 70 million albums worldwide, scoring eight No. 1 hits and 26 Top 10 singles over his 50+ years in the music industry. His lengthy chart history led to him being named one of Billboard’s Top 50 Most Played Artists Over The Past 50 Years. Such memorable hits as “I Just Can’t Help Believing, “Don’t Worry Baby,” “Whatever Happened To Old Fashioned Love,” “New Looks From An Old Lover” and “Hooked on a Feeling” have made him a staple on multiple radio formats over the years.

Born in rural Hugo, OK, Billy Joe Thomas moved to Houston, Texas with his family and where he grew up absorbing a variety of musical influences from the traditional country of Ernest Tubb and Hank Williams Dr. to the soulful sounds of Jackie Wilson and Little Richard, whose “Miss Ann” was the first single B.J. ever bought. He began singing in church as a child and in his teens joined the Houston-based band the Triumphs.

Thomas’s first taste of success came in 1966 when he recorded “I’m So Lonesome I Could Cry” with producer Huey P. Meaux. Released by Scepter Records, it peaked at No. 8 on the pop charts and became his first million-selling single. He released the follow-up single, “Mama,” and delivered his first solo album that same year.

Thomas’ second million-selling hit came in 1968 with the release of “Hooked on a Feeling,” from On My Way, his sophomore album for Scepter. During his days with the New York label, he became friendly with Ronnie Milsap and Dionne Warwick, who were also on the roster at the time. It was Warwick who introduced him to songwriter-producer Burt Bacharach. In January 1970, Thomas topped the charts with “Raindrops Keep Fallin’ on My Head.” Penned by Bacharach and Hal David, the song was featured in the classic Paul Newman/Robert Redford film Butch Cassidy and the Sundance Kid, earning the Oscar for best original song. Sales quickly exceeded two million copies and it has remained one of the most enduring pop hits of all time, reoccurring in such films as Forrest Gump, Charlie's Angels: Full Throttle, Clerks II, and Spider-Man 2 as well as multiple TV shows over the years. He followed that career-defining single with a string of pop/rock hits, including “Everybody's Out of Town,” “I Just Can't Help Believing,” “No Love at All” and “Rock and Roll Lullaby.”

After six years with Scepter Records, Thomas signed with Paramount Records where he released two albums—1973’s Songs and 1974’s Longhorns & Londonbridges. In 1975, Thomas released the album Reunion on ABC Records, featuring “(Hey Won't You Play) Another Somebody Done Somebody Wrong Song,” which holds the distinction of being the longest titled No. 1 hit ever on Billboard’s Hot 100.

Like many successful pop/rock artists, Thomas fell into drugs and battled substance abuse. His wife Gloria became a born-again Christian and the turning point in Thomas’ life came when he became a believer in 1976. He immediately quit drugs and found an avenue for expressing his faith in gospel music. Thomas signed with Myrrh Records and released the album Home Where I Belong in 1976. Produced by Chris Christian, the project won Thomas a Grammy and became the first of two Dove Award wins. The album became the first gospel record to sell a million copies. The warmth and emotional timbre of Thomas’s voice was well suited to the genre and he became one of gospel music’s most successful artists. His rendition of “Amazing Grace” is considered one of the most poignant of the classic hymn’s many covers.

In addition to his country and gospel success, Thomas also enjoyed a healthy run on the country charts in the 1980s with such hits as “Whatever Happened to Old Fashioned Love,” “New Looks from an Old Lover Again,” “The Whole World’s in Love When You’re Lonely” and “Two Car Garage.” “(Hey Won't You Play) Another Somebody Done Somebody Wrong Song” was No. 1 on both the Billboard Hot 100 and the Hot Country Songs charts. It won the Grammy for Best Country Song in 1976 and was nominated for CMA Single of the Year. On his 39th birthday in 1981, Thomas became the 60th member of the Grand Ole Opry.

Beyond populating multiple radio formats with so many beloved hits, Thomas also voiced the theme song, “As Long As We’ve Got Each Other,” for the popular TV series Growing Pains, and has lent his voice to numerous commercials, including campaigns for Coca-Cola and Pepsi. He can also be seen on television hosting Time Life Music’s Forever 70s infomercial. As an actor, he also appeared in the films Jory and Jake's Corner. Thomas authored two books, including his autobiography Home Where I Belong.

In 2013, he released The Living Room Sessions, an acoustic album, which celebrated Thomas’s nearly six decades in the music industry. The project featured Thomas dueting with other high profile artists on his most beloved hits, which included teaming with Richard Marx for “(Hey Won't You Play) Another Somebody Done Somebody Wrong Song,” Vince Gill on “I Just Can’t Help Believing,” Sara Niemietz on “Hooked on a Feeling,” Keb' Mo' on “Most of All,” Lyle Lovett on “Raindrops Keep Fallin’ On My Head” and The Fray’s Isaac Slade on “I’m So Lonesome I Could Cry.” The album was well-received with critics praising it as a reminder of just how engaging his voice remained after decades of recording and touring.

Though Thomas will be remembered as one of this generation’s premiere vocalists and a consummate entertainer, the humble artist was most proud of his family. He’s survived by his wife of 53 years Gloria, their three daughters Paige Thomas, Nora Cloud, and Erin Moore, and four grandchildren, Nadia Cloud, Keira Cloud, Ruby Moore, and Billy Joe Moore.

A quote from his website exemplifies Thomas’ humble attitude and appreciation for life. “All I am is just another guy. I’ve been very lucky,” he shared. “I’ve had a wonderful life, I’ve been a husband and a father who cherishes his children and now I’m a grandfather, and I’m motivated like all these teachers and preachers and mothers and fathers to help my kids grow up with character and self-respect. I hope that doesn’t sound too grandiose, but that’s what it comes down to. It’s what I’ve tried to do with my music and with the majority of my life.”

Funeral arrangements are forthcoming and will remain private. In lieu of flowers, in-memoriam donations will be accepted by Mission Arlington, Tarrant Area Food Bank, and the SPCA of Texas.

Hooked On A Feeling Hit Maker B.J. Thomas Dead At 78