Black Flag, Madball Lead When We Were Hungry Festival Lineup 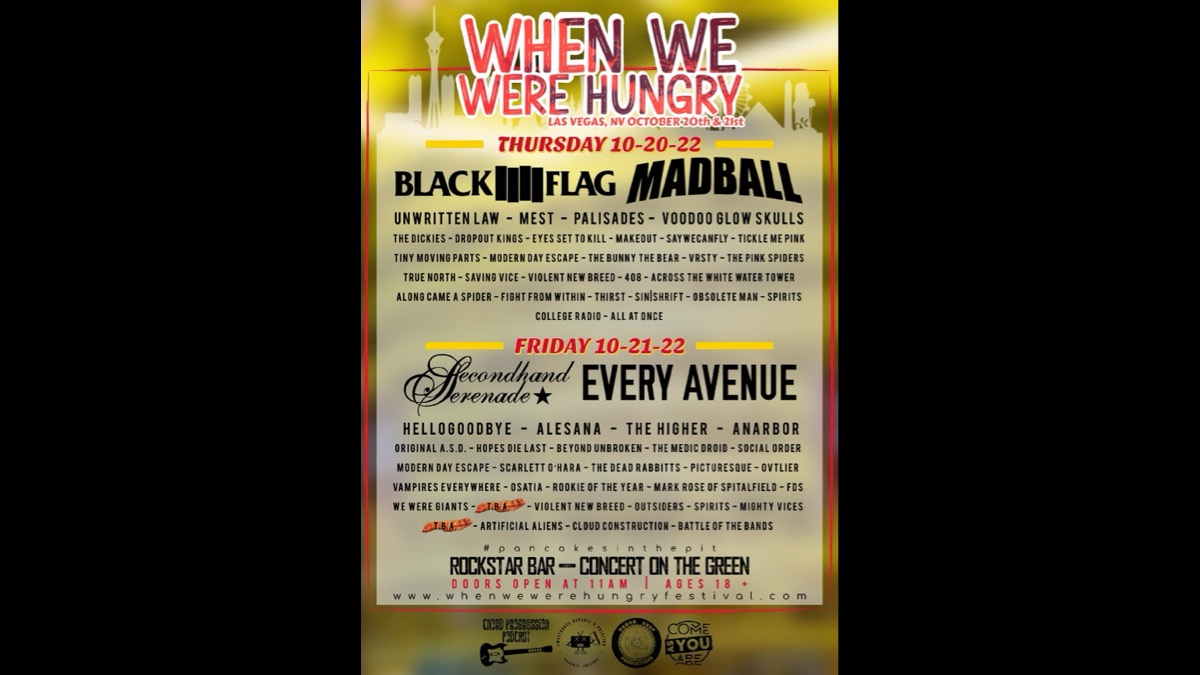 (SRO) What started as a meme created by Modern Day Escape bassist and songwriter William Wenz about hosting a festival in a Denny's parking lot turned to reality as he created the When We Were Hungry Festival alongside co-founder/director and artist manager Mal Levy.

The inaugural event will take place in Las Vegas, NV on Thursday, October 20 and Friday, October 21 at the 3,000-capacity venue Rockstar Bar - Concert On The Green. The festival will highlight independent-focused acts that represent a who's-who of the past and present rock, metal, punk and emo scene. The 2022 lineup will include headlining performances from punk rock icons Black Flag, legendary NY hardcore group Madball, emo rockers Secondhand Serenade and pop punk band Every Avenue plus more than 50 bands across two outdoor stages and one indoor stage over both days.

Following each day of the festival, there will be an official afterparty indoors in collaboration with Come As You Are Events with guest DJ sets and surprise performances from musicians including Social Order, Chris Donothon (The Medic Droid), Alesana and Michael Vampire (Vampires Everywhere). The afterparties will be 21+ only and ticketed separately from the festival, $25 for a single night pass or $40 for both nights. Purchase admission for either and/or both nights HERE.

"Through the power of the internet, what started only as a humble meme has blossomed into such a beautiful lineup of artists both big and small," says WENZ. "Defying even our own expectations, it has been a joy for us and the fans to watch the When We Were Hungry festival grow into a delicious piece of history!"

LEVY adds, "This festival is all about bringing people together--merging amazing legacy acts with the next generation. We quite literally went from a meme to a dream, and now an epic reality that is When We Were Hungry. This is our gift to you!"

"We are excited to be returning to Las Vegas to play the When We Were Hungry Festival at Rockstar Bar with Unwritten Law, The Dickies and so many more," says MIKE VALLELY, vocalist of Black Flag. "We'll be kicking off our 2022-2023 tour at this show, and I couldn't think of a better way to get things started."

Every Avenue lead vocalist and pianist David Strauchman commented, "It's an honor to be invited to play the When We Were Hungry Fest and share the stage with so many amazing artists. Every Avenue hasn't played a show on the West Coast since 2012, so needless to say I'm stoked to be asked to play these songs a decade later. The WWWH team has done an awesome job of bringing together a wildly diverse lineup that the fans are going to love. Can't wait! It's going to rock!"

HELLOGOODBYE vocalist Forrest Kline "When We Were Hungry has brought together a truly insane and sweeping lineup, including the first full band hellogoodbye set in Vegas in years. Cannot wait to let loose with y'all!"

"Looking at this killer line up, we're not only craving to play in Vegas for the first time in over a decade, but also salivating at the thought of sharing the stage with all these amazing bands," adds the Las Vegas-based pop rock band THE HIGHER's guitarist Reggie Ragan. "It's a feast fit for Vegas."

Single day tickets for WHEN WE WERE HUNGRY FESTIVAL are on sale now for $80 and weekend passes are available for $150. 18+ only. Purchase tickets here.

Black Flag, Madball Lead When We Were Hungry Festival Lineup