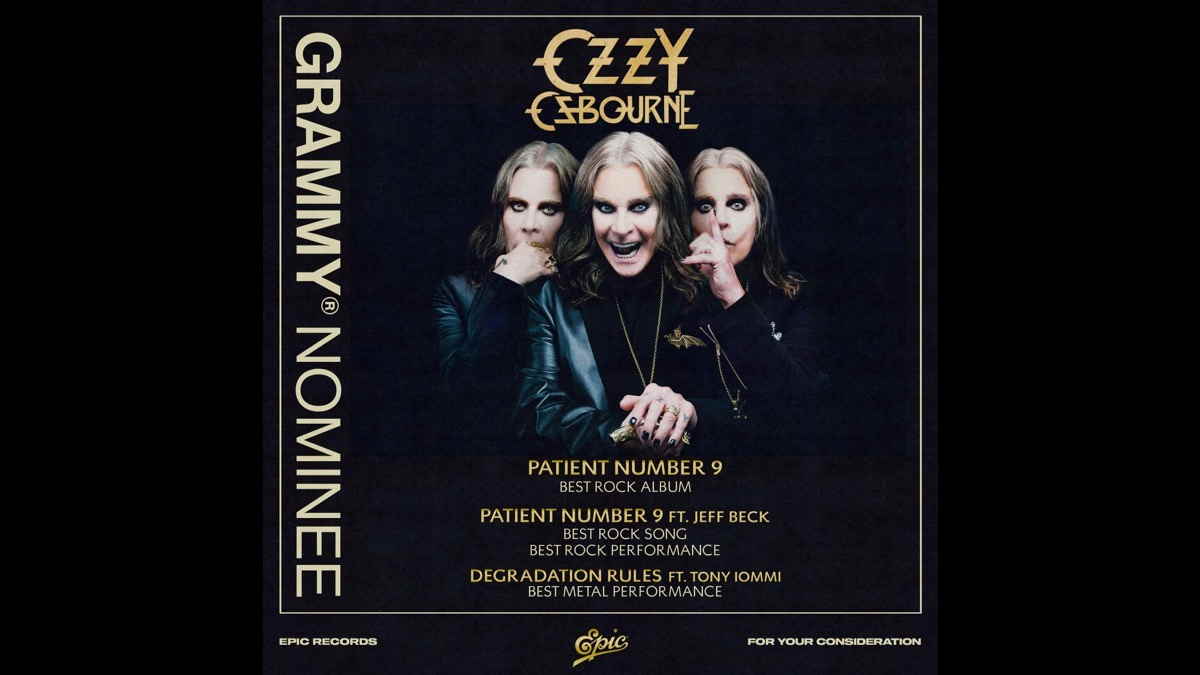 Ozzy Osbourne has reacted to the news that he has earned four Grammy nominations for his latest studio album, "Patient Number 9", the most nominations that the legendary vocalist has ever received for a single album.

SRO shared the following Q&A with Ozzy about his reaction to the nominations: Q: How does it feel to have received four nominations for the new album?

OZZY: "I'm honestly overwhelmed. Making this record was a great way to me to get back to work as I continued to heal. It's pretty great to be acknowledged at this point in my career."

Q: Between the pandemic and you going through your surgeries, do you think that contributed to making another record so quickly?

OZZY: "Well, the thing was I had all this time--we all did through the pandemic. Instead of lying there and just doing my physical therapy, the record actually got me doing something that I love."

Q: What was your mindset when you were writing and recording the album?

OZZY: "I was thinking about the times we've been living in. There wasn't much good news. It was a f***ing war in Ukraine and the pandemic. The world seemed to be on the brink of a bad thing."

Q: How do you feel at this point in your career having the kind of notoriety you've achieved with this album?

OZZY: "The business forever surprises me. It's never a safe bet. I've done things in the past where I tell myself 'this is going to be a hit.' Then it's gone down the sh*tter and other things I've done...It's done the opposite. I'm very cheered up by the support."

Q: The interesting thing about the album is it features top musicians, including some old friends.

OZZY: "Oh yeah. I mean the guitars are Tony [Iommi], Zakk [Wylde], Eric Clapton and Jeff Beck's f***ing phenomenal work, plus Robert Trujillo on bass. It's turned out better than I ever expected. And having Taylor Hawkins with me in the studio like a week or two before he died was amazing. To think he's gone breaks my heart."

Q: It must be special that "Degradation Rules" which features Tony Iommi, was nominated for a Grammy.

OZZY: "Such great news. I mean that song would've made a great Black Sabbath track. It's a very well-structured song. I've known Tony since I was 12 years old and I'm glad to say we've continued a really good friendship. Tony's been very supportive of me while I've been recovering from surgery. He's been in constant contact, which has been great."

Q: What's the collaboration like with producer Andrew Watt?

OZZY: "He's a lot better than most producers at collaboration. The fact that he plays guitar, and I don't, and he works with machines and I don't, makes it easier. It's just great working with him. We end up arguing a bit with...sometimes, but not a lot!"