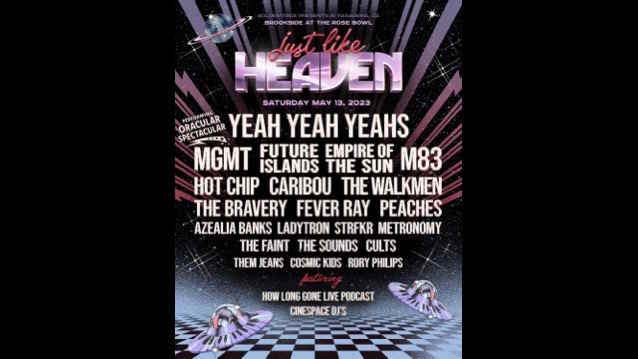 Yeah Yeah Yeahs and MGMT lead the lineup for the 3rd annual Just Like Heaven Fest that will be taking place in the foothills of Pasadena, Ca at Brookside At The Rose Bowl on Saturday, May 13, 2023..

MGMT plan a very special set at the event where fans will witness them perform their 2007 debut album "Oracular Spectacular" in full for the first time ever.

They will be joined by Future Islands, Empire of the Sun, M83, a special performance from the recently reunited The Walkmen, Hot Chip, Caribou, Fever Ray, The Bravery, Peaches, Azealia Banks, Ladytron, STRFKR, Metronomy, The Faint, The Sounds, and Cults.

The Yeah Yeah Yeahs had this to say, "We're headlining Just Like Heaven and cannot believe what a raaaaaaaad lineup it is this year! MGMT performing Oracular Spectacular! Fever Ray and M83 performing NEW music? what bliss! Karen cannot wait to rub elbows with goddesses Peaches and Azealia! Long time pals The Walkmen and and the Faint representing? An embarrassment of riches of bands! Not to mention we'll be playing some deep cuts off of Fever To Tell to celebrate its 20th birthday! Don't be square! Be there!"

MGMT added, "We are psyched to be returning to Just Like Heaven festival this May. Coinciding with the 15th year of its release, we will be performing all of Oracular Spectacular. And of course we'll be taking this opportunity to do some hearty experimentation. Expect the unexpected and see you in May!"

Passes go on sale this Friday, January 20th at 10 AM PST at justlikeheavenfest.com.