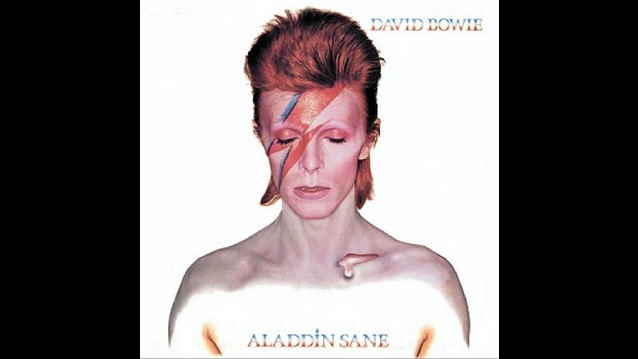 (hennemusic) David Bowie's camp have announced that they will release a series of 50th anniversary editions of the late rocker's 1973 album, "Aladdin Sane", on April 14.

Issued just ten months after his breakthrough album, "The Rise And Fall of Ziggy Stardust And The Spiders From Mars", the album was launched with a pair of hit singles: "The Jean Genie" and "Drive-In Saturday"; the cover featured Ziggy's iconic makeup while the title track and songs such as "Panic In Detroit", "Lady Grinning Soul" and "Time" marked a significant musical progression, adding brass, woodwind, soulful backing vocals and the distinctive piano of Mike Garson.

"Aladdin Sane" delivered Bowie his first UK No. 1 album and first to chart in the US Top 20; one week before its Golden Jubilee, the project will be released as a limited edition 50th anniversary half-speed mastered LP and a picture disc LP pressed from the same master.

To launch the 50th anniversary reissues, Bowie is sharing an upgraded 4K version of the official video for the set's original lead single, "The Jean Genie."