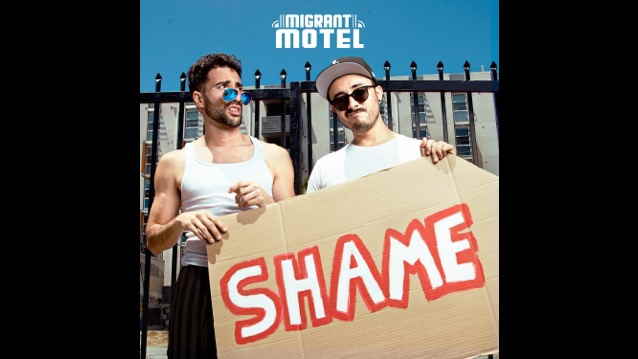 Migrant Motel recently released their new song and video called "Shame" and to celebrate David Stewart tells us about the track and visual. Here is the story:

This is by far the most real, personal song we've ever put out. We wanted to express the frustration of not being where you want to be in your career with the line "I'm a big rockstar that nobody knows".

We are accepting our situation, and acknowledging that there's so much shame surrounding unrealized ambitions... Expressing the frustrations we feel has been an extremely cathartic experience".

I directed the video and had a blast doing it! We shot it around LA with my Director of Photography Victor Ingles, who is a master behind the camera. It was nerve wracking to drive the car with a huge mounted camera on the hood... I think the camera rig was more expensive than the car.

The last day of the shoot was the parking lot scene and it was amazing to see it all come together: The big lights and the crane shots, I felt like a little Steven Spielberg - it was awesome