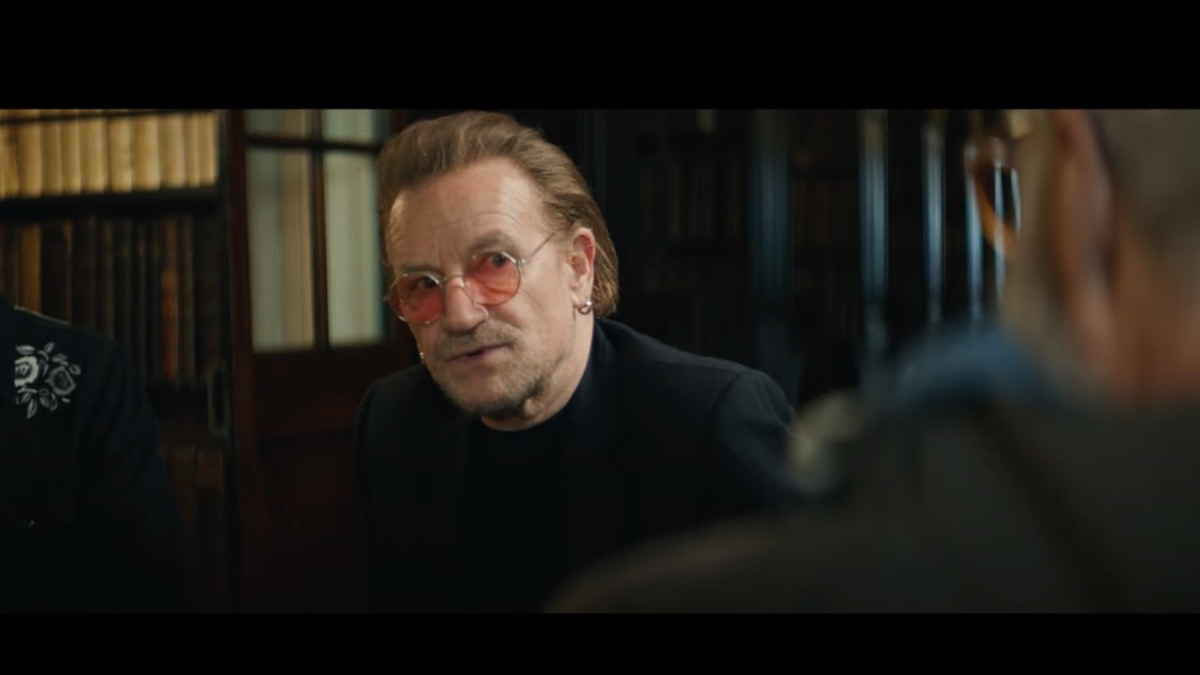 Still from the video teaser

(fcc) Disney+ set to premiere music docu-special, 'Bono & The Edge: A Sort Of Homecoming, with Dave Letterman' on March 17, St. Patrick's Day, coinciding with the highly anticipated new release from U2, "Songs of surrender."

Academy Award-winning filmmaker Morgan Neville captures Dave Letterman on his first visit to Dublin to hang out with Bono and The Edge in their hometown, experience Dublin, and join the two U2 musicians for a concert performance unlike any they've done before.

Disney Branded Television President Ayo Davis made the announcement today, unveiling a first-look teaser of the docu-special during her TCA remarks. "Bono & The Edge: A Sort of Homecoming, with Dave Letterman," from Disney Branded Television, is set to premiere globally on Disney+ on March 17, St. Patrick's Day, coinciding with U2's highly anticipated album "Songs Of Surrender" ― a collection of 40 seminal U2 songs from across the band's catalog, re-recorded and reimagined. The docu-special is the latest in Disney+ music specials from Disney Branded Television, including last year's highly successful "Elton John Live: Farewell From Dodger Stadium" and the critically acclaimed "Encanto at the Hollywood Bowl," both currently streaming on Disney+.

From Brian Grazer and Ron Howard's Imagine Documentaries, Neville's Tremolo Productions, and Dave Letterman's Worldwide Pants, "Bono & The Edge: A Sort of Homecoming, with Dave Letterman" is part concert movie, part travel adventure plus a whole lot of Bono and The Edge, with Dave's humor throughout.

As well as the concert performance itself, the docu-special will focus on the extraordinary relationship between Bono and The Edge and how it has developed across 45-plus years of close friendship and one of the most remarkable songwriting partnerships in the history of rock 'n' roll, plus document Dublin through Dave's eyes as he experiences Bono and The Edge's home city for the first time.

"Bono and The Edge are the force behind one of the most prolific and influential acts in the history of rock and roll, and we are honored to bring this truly intimate look at their beginnings, friendship, and creative process to a global audience on Disney+," said Davis.

"Recently, I won a radio contest," said Letterman. "Winner gets to visit Dublin with Bono and The Edge (radio contest part not true, but I feel like a winner). They showed me around, introduced me to their musician friends, and performed some of their greatest songs in a small theater. It's a great tour. Get in touch with them ― I'm told there are still availabilities. I'm the luckiest man on the planet. (There are no availabilities)."

Letterman, who accepted an invitation from the two U2 bandmates to join them in Dublin for his first-ever visit to Ireland, has a 25-year relationship with U2 but had previously only spent time with the Bono and The Edge in the U.S. As well as being their honored guest at an intimate concert performance at a local landmark, the former Ambassador Cinema building at the top of O'Connell Street on Dublin's Northside, Dave embarks on his own exploration of the city. He visits the legendary Forty Foot swimming spot on a freezing cold morning and rides the DART commuter train north from Co. Wicklow. Letterman also inspires a brand new U2 song written by The Edge and Bono and narrowly escapes having to perform at a sing-song at the legendary McDaid's pub off Grafton Street with an equally legendary bunch of artists and musicians, including Bono, The Edge, Glen Hansard, Marketa Irglova, Imelda May, Loah, Saint Sister, Grian Chatten of Fontaines DC, and Dermot Kennedy, whose voice Bono describes as a "sonic boom."

"I fell in love with U2 and David Letterman at roughly the same time, somewhere around my sophomore year of high school," said director Morgan Neville. "That somehow decades later we would all come together in Ireland to make this show was an unlikely dream somehow come to life."

"I had this incredible dream that I was in the magical city of Dublin with Bono, The Edge and David Letterman," said producer Justin Wilkes. "And if it wasn't for the fact that Morgan beautifully captured it all on film, I still wouldn't believe it actually happened."

The film was shot on location in New York and Los Angeles and, of course, in Dublin, Ireland.