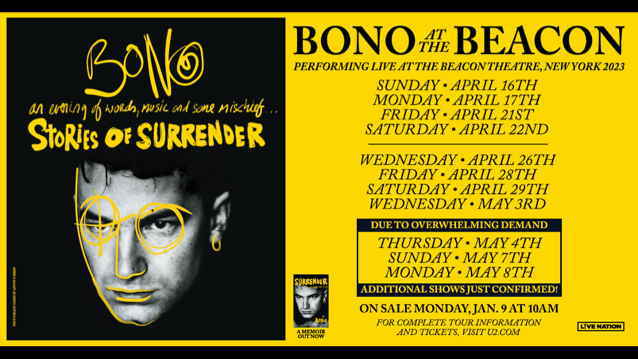 The announcement of Bono at The Beacon in 2023 follows last year's hugely successful run of 'Stories of Surrender' - a show that left both audiences and critics cheering for more - in support of 'SURRENDER: 40 Songs, One Story', the New York Times and Sunday Times best-selling memoir by Bono - artist, activist and U2 lead singer - available now. 'Stories of Surrender,' produced by Live Nation and directed by Willie Williams, marks the release of a memoir in which one of the world's most iconic artists writes for the first time about what and who brought him success, while at the same time revealing his "...childhood insecurity, which is your only security" as a performer, and the faith that sustains him.

The storied surroundings of the Beacon Theatre perfectly illuminate Bono's role as bandleader and activist, as well as the remarkable lives entwined with his own. This is a life, alive and very present, on stage.

Bono will once again be joined by musicians Gemma Doherty (Harp, Keyboard, Vocals) and Kate Ellis (Cello, Keyboard, Vocals), as well as Musical Director Jacknife Lee for an evening of "words, music and some mischief..."