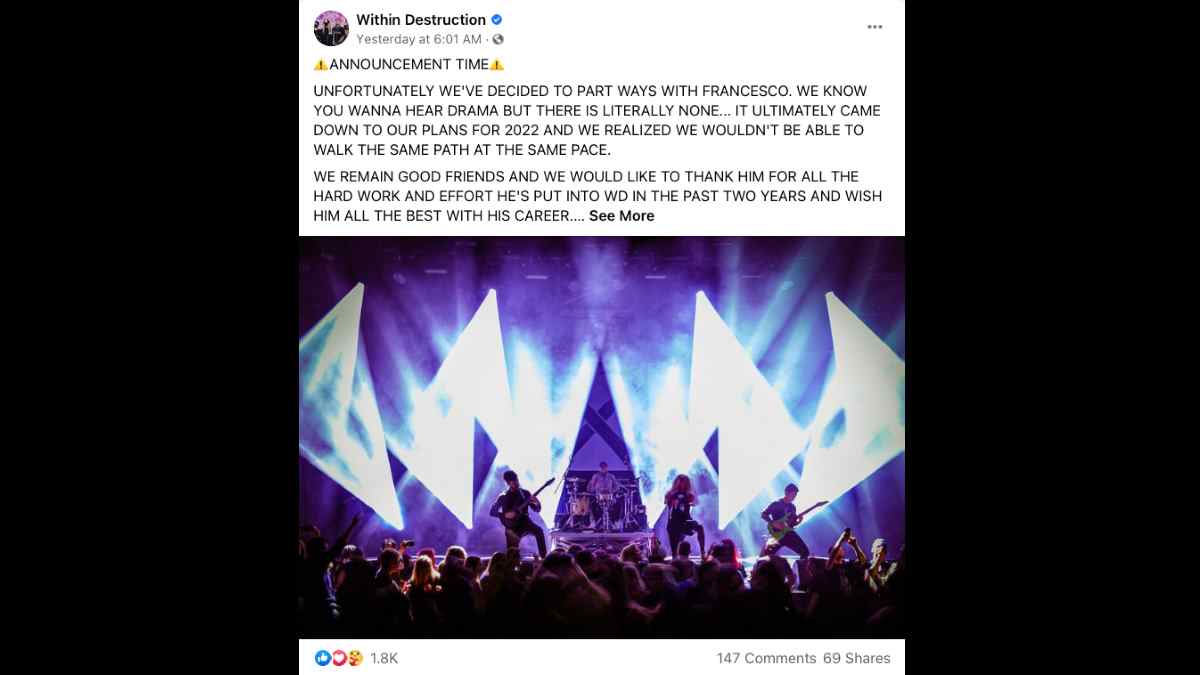 Within Destruction have announced the amical departure of guitarist Francesco Filigoi so that he can fully focus on recovering from a wrist injury that he suffered earlier this year.

The band broke the news with the following message to fans, "Unfortunately we've decided to part ways with Francesco. We know you wanna hear drama but there is literally none. It ultimately came down to our plans for 2022 and we realized we wouldn't be able to walk the same path at the same pace.

"We remain good friends and we would like to thank him for all the hard work and effort he's put in the past two years and wish him all the best with his career."

Filigoi had this to say, "It may come as a surprise to most of you, but I've decided to part ways with Within Destruction. I'm extremely grateful for the journey we've shared in the last couple years - Touring the world with the boys and creating the album Yokai has been one of the best experiences in my life.

"Our team work has been incredible and it made me grow a lot, both professionally and as a human being. At the same time, my priorities in music and life have changed, and now more than ever I feel the need to start a new chapter.

"Earlier this year I suffered a wrist injury that prevented me to do anything guitar-related for a couple months. I was able to recover and play some shows with WD but I'm still not 100% and would not be able to do any extensive touring, so I'll be taking the next months to get my overall health back on track. Because of this, I want to prioritize more stable work, and avoid conflicts with the band's plans and touring schedule. This means lots of new videos, new solo music, and yes, new Abiogenesis.

"I may or may not be involved on future WD music as well - What I can tell you for now, is that the new album is gonna be next level, and I cannot wait for the new evolution of the band to conquer the world.

"I can't put into words how much your support means to me, even the smallest interaction or message. I hope I left a positive trace on you through Within Destruction, and will continue to deliver the best music I can make. Thanks for sticking around, much love."