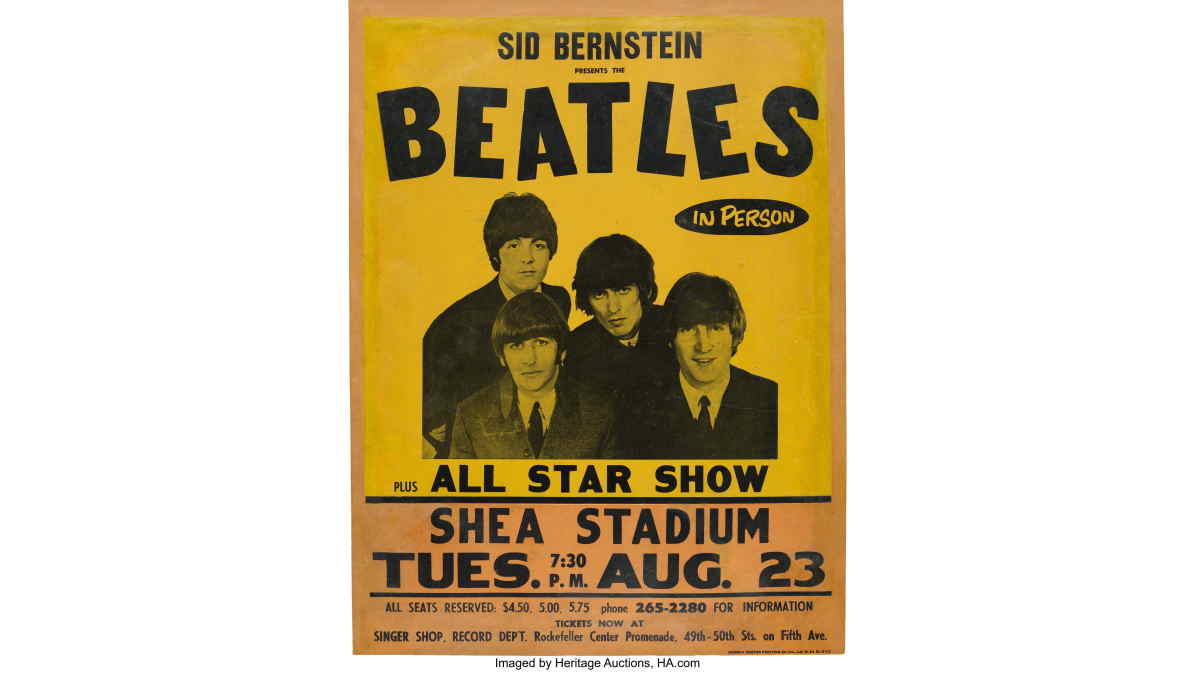 (HA) An adverting poster for the Beatles legendary August 1966 show at Shea Stadium sold for $150,000 at Heritage Auctions on Saturday (November 6th).

Heritage Auctions sent over the following details: It has always been The Most Famous Concert Poster in the World. The Beatles. At Shea Stadium. On Aug. 23, 1966. But Saturday afternoon at Heritage Auctions, during the auction house's Nov. 6 Music Memorabilia & Concert Posters Signature Auction, the bright yellow cardboard featuring the Fab Four tied the record for The World's Most Expensive Concert Poster, selling for $150,000.

That equals the world record set in May 2021, when a poster for Hank Williams' two shows scheduled for New Year's Day 1953 at the Canton Memorial Auditorium in Ohio sold at Heritage Auctions for $150,000. Williams never made those concerts: He died en route.

Another poster from that Williams concert sold during Saturday's auction for $137,500. One of only a handful known to exist, this one was discovered in an Ohio barn by the family of Steve Gaydos, Executive Vice President of Global Content and Executive Editor of Variety, the entertainment-industry trade magazine. Gaydos consigned the poster to Heritage after seeing May's record-setting results.

A third iconic poster also sold Saturday for six figures: the beloved Family Dog "Skeleton and Roses" poster that barked about the Grateful Dead's September 1966 show, played just two weeks after the band inked its deal with Warner Bros. The poster sold Saturday proved a must-have for myriad reasons, among them it's credited to "Mouse Studios 66," which in this case meant artists Stanley Mouse and Alton Kelley, and it's CGC Near Mint+ 9.6. The Dead poster fetched $109,375. That's a lot of Ripple.

The entirety of Saturday's auction realized $1,505,523, and counted among its myriad highlights a 44-page program from the Northern Premiere of A Hard Day's Night signed by all the Beatles (which sold for $93,750); and a signed Michael Jackson red-leather jacket gifted after a performance at Madison Square Garden in 1988 (which sold for $87,500). More than 1,400 bidders attended the auction, either in person, by phone or at HA.com; and the event boasted a 98.49% sell-through rate by value.

But most significantly, Saturday marked the first time in auction-house history that three concert posters in one auction sold for more than $100,000.

"It's a strong testament to the growth of the concert-poster hobby that three posters would all sell for north of $100,000 on the same day," says Pete Howard, Heritage Auctions' Director of Concert Posters. "And what's great is that they're not all of the same genre: You have British-invasion rock, country music and San Francisco psychedelia. The tide in this hobby is rising, and all genres of concert posters are rising with it."

The Beatles' Shea Stadium poster that sold Saturday came from a family that had owned the poster for the last 55 years. This family owned no other posters, and kept the Beatles placard on display, a fond keepsake from a show the family's matriarch actually attended. The family brought it to Heritage Auctions only when they realized the value of that memory hanging on the wall.

This is but the fourth Shea Stadium poster Heritage has ever offered - and in April 2020, the one that sold for $137,500 briefly held the record as the world's most expensive concert poster, until the renowned Hank Williams offering claimed that title earlier this year.

John Lennon might approve. After all, he once said that he "started imitating Hank Williams when I was 15, before I could play the guitar." Certainly, the Fab Four and the Hillbilly Shakespeare belong together in such rarefied air.

What makes the Williams poster so meaningful is the fact the man called Mr. Lovesick Blues never made this Jan. 1, 1953, concert at the Canton Memorial Auditorium in Ohio. He died of a heart attack in the backseat of a car somewhere between Bristol, Tenn., and Oak Hill, W.Va., en route to that Ohio show. Williams was 29 when he died. The concert still took place as scheduled, with his backing band, The Drifting Cowboys, and everyone else on the bill offering in Williams' absence a heartsick tribute to the man whose songs they performed by way of farewell.

This poster has acquired its own mythic status, in large part because there are but three known copies in existence. And with Saturday's sale, only two have ever reached the auction block.

"It was a race to the finish line today, and the Beatles edged out Hank Williams, who finished ahead of the Grateful Dead," Howard says. "Talk about something for everybody's taste!"